It's impossible to see everything at this all-night event, so here's a list of best bets from our editorial team. 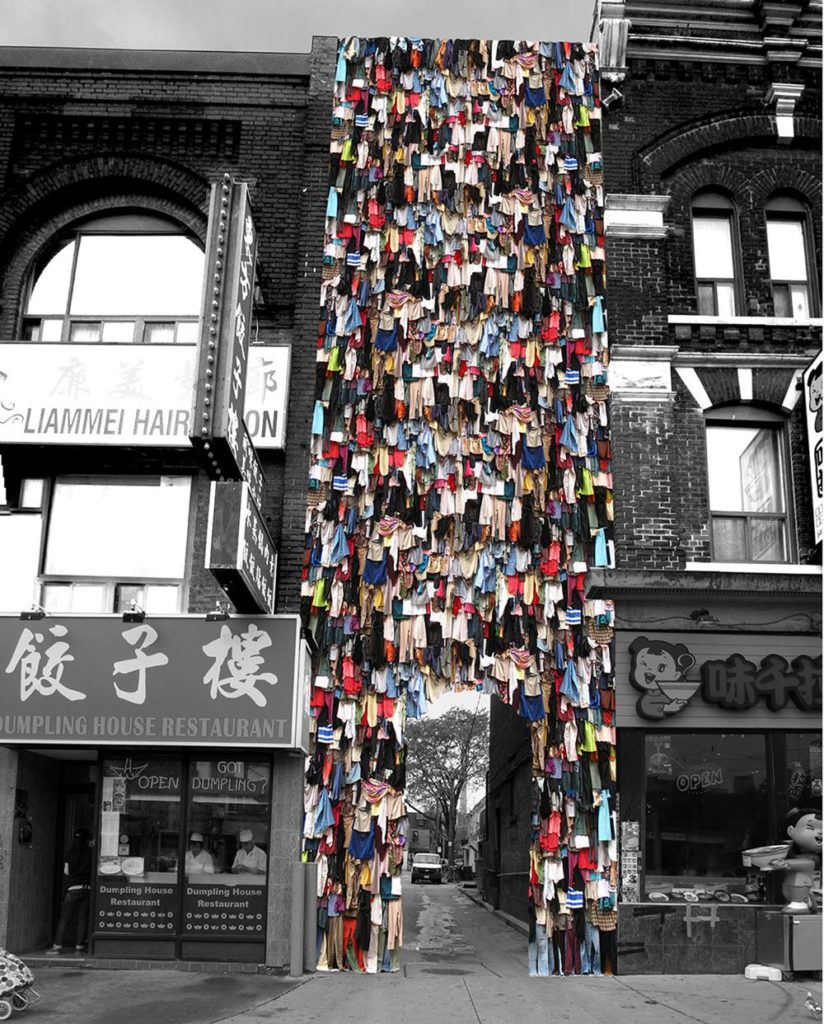 A rendering of Maria Ezcurra's Made in China, which promises to take over a gap in the Spadina streetscape during Nuit Blanche with a tower of clothing from the local community. (Rendering by Pedro Orozco.)

Scotiabank Nuit Blanche in Toronto kicks off at 6:53 p.m. this Saturday, October 4, with more than 80 independent projects by Toronto’s art community and four curated exhibitions featuring 48 other projects. It’s impossible to see everything—and also impossible to know, given the event’s ephemerality, what art will have the most impact. That said, here are our editorial team’s best bets for the all-night art fest.

Spadina Avenue between College and Queen is an exemplar of urban flux. It’s a part of Toronto fixed in perpetual transition: first, as one of the city’s grand, tree-lined avenues; then, as a hub for the textile industry and labour unionization; then, as a hotbed for jazz and counterculture scenes, with dodgy hotel bars, burlesque theatres and artist studios; and, most recently, as a bustling heart of Toronto’s Chinese community. Now, with gentrification, Spadina is once again on the cusp of change. In short: if you want to know what Toronto really was, is and might be, this is the place to start. So it makes sense that, for the first time, Nuit Blanche is descending on the Spadina area with curator Dominique Fontaine’s exhibition “Between the earth and the sky, the possibility of everything.” The highlights promise to tap into the area’s ever-changing cultural commotion. Just north of Dundas, Montreal- and Mexico City–based artist Maria Ezcurra’s Made in China (2014) fills a gap in the streetscape with a tower of clothing from the local community. Cuban artist Alexandre Arrechea’s BLACK SUN (2009) projects a video of a wrecking ball at the corner of Spadina and Grange—a critical comment on the loss of memory amid the destruction of urban change. And on Soho at Queen, Icelandic artist Marcos Zotes’s AMAZE (2014) builds an immersive labyrinth out of construction scaffolding, offering “a personal journey of discovery and transformation” not so different, perhaps, than a walk along Spadina any other day of the week.—Bryne McLaughlin, managing editor

This year, FASTWÜRMS present a 70s-kitsch-dystopia-inspired divination machine run by “cybernetic Witches”—one that trades gifts and prophecies for valuable personal information. The project is the kind of cheeky flirtation with the occult that is sure to titillate Nuit Blanche’s sometimes straight-laced audience. But on a deeper level, Fortune-Teller Machine – Zardoz (FTM) also promises to attend to the transactional nature of social media, wherein we complicity exchange our data for the promise of free Internet fun. Considering the growing grand-scale presence of hashtags and image-sharing at events like Nuit Blanche, I welcome this critical and cautionary playfulness.—Alison Cooley, editorial intern

Kelly Mark is no stranger to Nuit Blanche or to public art, in Toronto and elsewhere. Yet in a year in which many of the event’s curatorial statements are overreaching—Dominique Fontaine promises her exhibition will “[alter] our basic assumptions about what we see, feel, and understand about our worlds and ourselves” and Magda Gonzalez-Mora (Mark’s own curator) promises an exhibition that “defends and trusts the restorative power of art”—Mark is characteristically and refreshingly laconic. The name of the piece is Everything and Nothing and, according to Mark’s lucid statement, is a dialogue between a man and a woman at Fort York Public Library in which the woman recites phrases beginning with “everything” and the man answers with phrases beginning with “nothing.” In the context of a night known for its utopianism as well as its bathos, Mark’s proposal feels bravely apt.—David Balzer, associate editor

In this exhibition curated by Stefan Hancherow, six emerging artists join forces (using light, sound, film, video, GIF and sculptural installations) to create immersive, interactive environments that encourage visitors to “discorporate”: a Frank Zappa–ism that means “to leave your body,” achievable here by going through the looking-glass (or retina display) to enter a colourful, deteriorating world illuminated by the glare of technological devices and populated by emojis. Those who saw Grégoire Blunt and Emmy Skensved’s UV-lit, gin and tonic–doused room at Erin Stump Projects earlier this year can expect to experience, as they would put it, similarly incandescent “CL∆SS A PSYCHO∆CTIVE ₩ORLDVISIONS” that promise to “unbind your mind.” If that sounds a bit too high-tempo, you can always just chill out on Lili Huston-Herterich’s furniture—upholstered in photographic fabric—and bask in the digital glow. The project also includes work by Matthew Williamson, Aryen Hoekstra and Lorna Mills. —Rosie Prata, copy editor

HOLOCENES is a performance installation created by EARLY MORNING OPERA, a performance and art “lab” that embraces emerging technologies to produce entertaining, genre-bending live events. In this work, a rotating cast of performers enact everyday activities inside an aquarium-like sculpture equipped with a programmable hydraulic system that by turns floods and drains the aquarium. The performers continue with their mundane actions as their environment is deluged, provoking thought on human relations with water, from our myopia amid climate crises to our resilient will to adapt.— Amy Luo, web intern

“All Together Now” at Hart House

Originally for my Nuit Blanche pick, I had wanted to highlight CanAmerican Energy Arts Team’s Monument to North American Energy Security at Nathan Phillips Square, which according to the printed Nuit Blanche program guide is supposed to bring two large oil barrels joined by a pipeline to City Hall’s (admittedly already quite unpristine) reflecting pool. But since that politically pointed installation seems to have disappeared from the Nuit Blanche website (with no explanation received by press time), I will turn to anticipating “All Together Now.” Hart House curator Barbara Fischer is known for reliably striking a good Nuit Blanche balance between spectacle and intimacy, and this year’s themed project promises more of the same, looking at “the choir format and its capacities for inspiring feelings of togetherness, communicating shared memory and history, and–occasionally–provoking less than harmonious results.” Installations are complemented by on-the-hour performances by 10 choirs from the Toronto community. (And I’m still going to keep my eyes peeled for rogue oil barrels around town too, just in case.) —Leah Sandals, online editor