Peter Wilkins and Will Gill: Rock and Lagoon 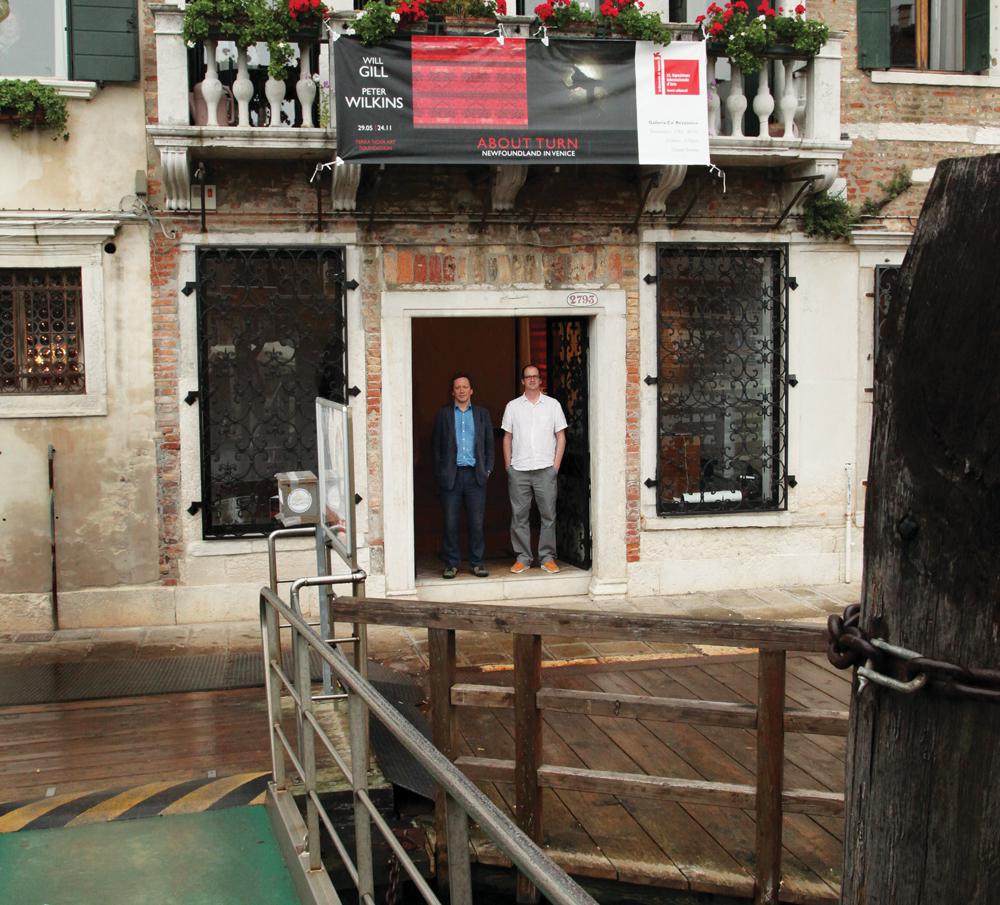 Artists Peter Wilkins and Will Gill at the entrance to Galleria Ca’ Rezzonico in Venice, June 2013 / photo Roberto Echer

The Duke of Duckworth pub in downtown St. John’s is a long way from Galleria Ca’ Rezzonico on Venice’s Grand Canal, but Peter Wilkins and Will Gill bridge that 4,800-kilometre gap. In 2010, these artists—with curators Mireille Eagan and Bruce Johnson, among others—were lunching at the Duke and hatched what Wilkins calls a “slightly whimsical” idea: organizing a Newfoundland exhibition for the Venice Biennale.

Fast forward to May 30, 2013: following the founding of the not-for-profit Terra Nova Art Foundation, a massive fundraising effort, and Venice rain that soaked Gill’s crates, delivered in open-top boats, “About Turn: Newfoundland in Venice” opened at the Galleria as an official collateral event of the Biennale.

“If we’d known about the challenges from the get-go, I’m not sure we would’ve attempted it,” Gill says. “But we were green enough that we said, ‘What the heck?’”

The payoff has been “the most fantastic experience an artist can have,” Wilkins says. A descendant of UK National Gallery architect William Wilkins and a nephew of an identically named landscape painter, Wilkins moved to St. John’s in 1998, and then to his wife’s childhood home of Clarke’s Beach, an hour’s drive west, in 2002. Having worked on TV productions for Channel Four in the UK, Wilkins makes photo- and video-based works that reflect on painting’s legacy. In Venice, he is showing video portraits of Canadian musicians.

Gill, an Ottawa native, studied art at New Brunswick’s Mount Allison University. Attracted by an apprenticeship at Luben Boykov’s Logy Bay foundry, he moved to Newfoundland in 1998. Longlisted twice for the Sobey Art Award, Gill revamps maritime landscapes and psyches in surprising ways; his “About Turn” paintings can read as both shipwrecks and lifeboats.

“About Turn” has cost $130,000—“a small mortgage,” Gill says. Most of that money had to be raised in the 14 weeks that followed the Biennale’s acceptance notice, which came in mid-February.

Newfoundlanders helped, with $10,000 in support from the City of St. John’s, $10 Indiegogo boosts, a $150-a-ticket cocktail party at dealer Christina Parker’s gallery and a $15-a-pop masquerade ball at artist-run centre Eastern Edge. The artists also dipped into their own accounts, and fundraising was still ongoing at press time. “We are still pinching ourselves that it has really happened,” Wilkins says of “About Turn,” which continues to November 24.

Gill and Wilkins, as founding members of TNAF, now look forward to helping other Newfoundland artists expand their horizons. “We wanted to set up a framework whereby artists from Newfoundland would have an opportunity to show work outside of Canada,” Gill says. “We hope to continue on with this, for Newfoundland.”

This is an article from the Fall 2013 issue of Canadian Art. To read more from this issue, please visit its table of contents.