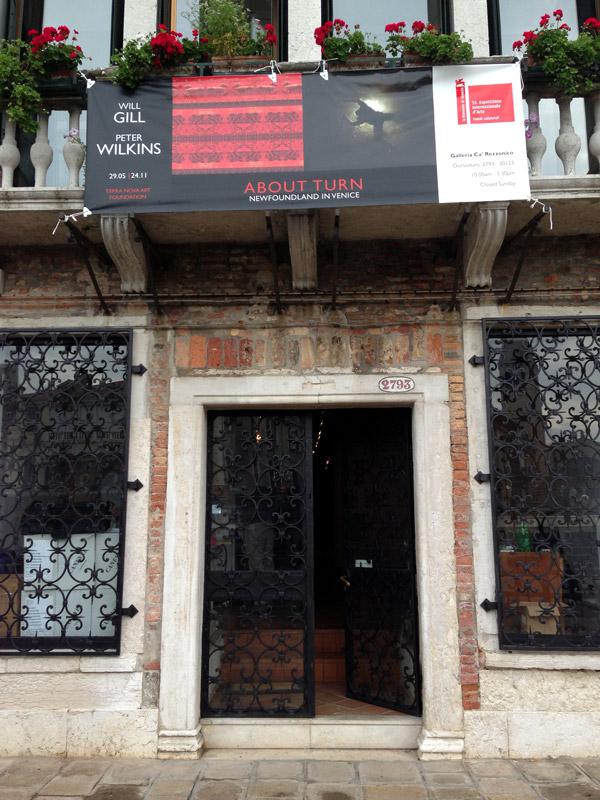 Entrance to the exhibition “About Turn: Newfoundland in Venice”

A still from Will Gill's video Trepassay

From left: artist Will Gill, curator Mireille Eagan and artist Peter Wilkins at the entrance to Galleria Ca'Rezzonico, home to “About Turn”

In what is being billed as the first official participation of Newfoundland artists in the Venice Biennale, Peter Wilkins and Will Gill opened an exhibition of new works today at Galleria Ca’ Rezzonico, a space next to the famed Ca’ Rezzonico museum on Venice’s Grand Canal.

Wilkins and Gill’s exhibition, titled “About Turn,” is an official collateral event of the Biennale.

“This sets a precedent,” says Mireille Eagan, who co-curated the project with Bruce Johnson. Both of the curators also live in Newfoundland.

Eagan explains that other Newfoundland artists have done unofficial projects in Venice before—like Jordan Bennett’s street postering in “Contrary Projects in Venice: An Aboriginal Intervention at the Venice Biennale 2011”—but “About Turn” is Newfoundland’s first spot on the program distributed by the Biennale itself.

Gill’s paintings are a mix of abstract and figurative, and are based on narratives of people lost at sea. Such stories, and their associated imagery, have haunted Gill since childhood.

“For years, I’ve had this vision stuck in my head of people alone swimming on the water at night,” Gill says. “I found the ocean so beautiful and strong…but at the same time, there’s a darkness to it.”

Gill also says he is intrigued by the language used to describe those gone missing at sea.

“They always say ‘lost on the water’ because the bodies are never recovered. There is never closure,” he says. The artist hopes that these paintings may be “a way of taking back the ones who have been lost.”

Wilkins’s prints are intended to put a contemporary spin on the centuries-old trope of still-life painting. In them, he layers images of typical still-life subjects like flowers and food to produce images that, from afar, may resemble monochromes in yellow, blue, red and white.

“I always been very taken by pattern and reflection as inspiration,” says Wilkins. In past works, he has taken photographs of urban and rural landscapes, repeating them in the same image to produce abstract patterns. This, he says, his is “first attempt” at applying a similar strategy to still lifes and colour studies.

“It’s my way of trying to do a sort of still life with modern technology,” Wilkins says.

The videos in the show also relate to each artist’s wall works.

The Long Road to Venice

Though Eagan, Gill and Wilkins only arrived in Venice five days ago, “About Turn” has been a long time in the making.

Three years ago, a group of Newfoundlanders banded together with the aim of showcasing Newfoundland and Labrador artists at the Venice Biennale. Last year, the group formally became a not-for-profit art foundation called the Terra Nova Art Foundation; Wilkins found the gallery venue in Venice; and TNAF applied to host a collateral event at the Biennale.

But the timeline sped up quite a bit of late. Just a few months ago, in mid-February, TNAF learned that their project had been accepted as a collateral event, and the fundraising for the $30,000 participation fee and the $100,000 rent, shipping and accommodation costs began in earnest.

Indeed, the main challenge, as for many presentations of Canadian art in Venice, was fundraising.

While public funders such as the Newfoundland and Labrador Arts Council, the City of St. John’s and the provincial government have provided funding for “About Turn,” Eagan says much of the $130,000 needed for the project has also come from private sources. These range from major matching donations by anonymous Newfoundland philanthropists to contributions as small as $10 via an Indiegogo crowdfunding page, and from $150-a-ticket cocktail parties at commercial dealer Christina Parker Gallery to $5 concerts at artist-run centre Eastern Edge.

Eagan says that funding has been “pretty even across the board” in terms of the split between public and private. She said that fundraising efforts also highlighted a knowledge gap: “A lot of people don’t really necessarily understand what the Venice Biennale is, so [this experience] is going to be a really interesting education tool back there too.”

Another challenge—perhaps one common to Newfoundland as well as Venice—was occasional bouts of nasty wet weather.

Last Friday, when the group arrived, Venice was suffering under acqua alta, or high water. The famed San Marco Square was under a foot of water, and the Grand Canal rose up to the Galleria Ca’ Rezzonico’s doorway.

“I’ve got a hilarious picture of the ‘Keep Dry’ sticker on the edge of one of my crates which was soaked with water,” Gill says. Luckily the work wasn’t damaged. (Wilkins’s work showed up dry, but only yesterday, with less than 24 hours to go until the opening.)

Interestingly, the exhibition seems to speak to other themes in common between Newfoundland and Venice.

Both these islands are surrounded by ocean—Newfoundland at a much more significant remove than Venice, of course—and have a lore of ocean and ocean disaster that is reflected in Gill’s paintings and video.

Venice also has a long tradition of hosting some of the best paintings in the world—some of them at the nearby Ca’ Rezzonico museum—and Wilkins’s work reflects on that tradition.

Looking to the Future

Though there continue to be challenges to the art community in Newfoundland—among the latest items being the elimination of Eagan’s position at the Rooms due to major provincial arts funding cuts and Johnson’s decision to resign from the same institution.

But “About Turn” provides a bright light for the province. In it, one sees a characteristically Newfoundland can-do spirit: making do with fewer resources and approaching projects with a communal and enthusiastic drive despite difficult circumstances.

Eagan says she hopes the project shows that “Newfoundland is really part of the conversation in a substantial way despite being geographically isolated and perhaps suffering socioeconomically in terms of giving artists the exposure they need.”

The group also says that TNAF will also look to participating in other biennales in the future.

“About Turn” officially opened to the public today and continues to November 24 at Galleria Ca’ Rezzonico in Venice.

This article was corrected on May 30, 2013. When referring to staffing changes at the Rooms, the original copy misidentified Bruce Johnson as Bruce Ferguson.