The Many Faces of Performance Art Legend Margaret Dragu 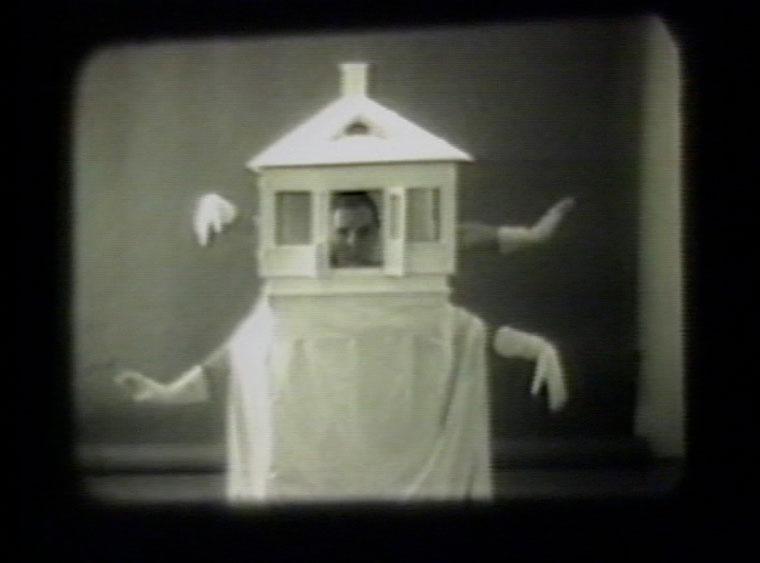 Margaret Dragu performing as Lady Justice for a performance about AIDS, guilt and fear as part of Viva! Art Action and Sexe! Art Action at Bain Saint Michel in Montreal in October 2006 / photo Guy L'Heureux

Margaret Dragu as Lady Justice and the 7 Virtues/Vices, Rose Man and Coat Cooke performing for ROSE (Remember Our Sisters Everywhere) on December 6, 2009, the 20th anniversary of the Montreal Massacre, at the bench memorial in Thornton Park, Vancouver / photo Mikki Herbold

Verb Woman, Lady Justice, Art Cinderella—these are a just a few of the guises of Vancouver performance artist Margaret Dragu.

It’s a cast of characters that the 2012 Governor General’s Award winner has inhabited from coast to coast over the past four decades. Through these personae, Dragu has put a bawdy, feminist perspective on the motions and emotions of everyday life, from to domestic chores to psychic readings to bicycle riding.

Politics and protest play a key part for Dragu. Some performances have taken on local arts-budget cuts and commemorated the Montreal Massacre. She staged a John Lennon and Yoko Ono–esque “bed-in” for peace at the 2010 Winter Olympics, and in 2000 she scrubbed the steps of the Ontario Legislature—an action that scholar Jayne Wark has written “alluded clearly to the erosion of civil values and the dismantling of the networks of social caring,” particularly in light of a violent anti-poverty protest at the legislature a few weeks earlier.

Dragu’s experience with different senses of self also has some very personal roots; she worked as a stripper at one time, as well as a house cleaner. She says some upcoming works will address her divorce, among other issues.

Here, a selection of performance images and videos offers a brief overview of Dragu’s kaleidoscope of identities and actions. These images expand on a feature article coming in the Spring 2013 issue of Canadian Art in which prize-winning novelist Ann Ireland delves deep into Dragu’s life and work. Click on the Photos icon above or the videos below to learn more, and watch for our new issue on newsstands starting March 15.

Lady Justice and the Lover Swan—Chapter 2 of Lady Justice Comic Book/Fumetti by Margaret Dragu. This “mythic tale of jealousy, sex, representation, revenge, celebrity, media and justice” was created with thanks to David Bolt, Sarah Sheard, Louise Bak and the Box Salon in 2009. Video embedded with the permission of Margaret Dragu from her Vimeo channel.

Verb Woman: Driving by Margaret Dragu. Created at a VIVO studio shoot with Asa Mori and Dinka Pignon and combined with found footage in 2010 and 2011. Video embedded with the permission of Margaret Dragu from her Vimeo channel.

Verb Woman: TV Channel by Margaret Dragu—a look at Verb Woman’s foray into Occupy Edmonton’s tent city on a day when it had been ordered to vacate the premises in 2011. Video embedded with the permission of Margaret Dragu from her Vimeo channel.

Once Upon a Time, the first in a 2012 series of works by Verb Woman (aka Margaret Dragu) about “conflicts, walls and peace lines.” Created thanks to Patti Smith, Alexander Rybak, Jefferson Airplane, Charles Bronson, John Travolta, Maxine Young, King Kong, The White Rabbit and Mehitabel the Cat. Video embedded with the permission of Margaret Dragu from her Vimeo channel.