Gifts of the Earth: Crafting Ceramics from Maritime Mud 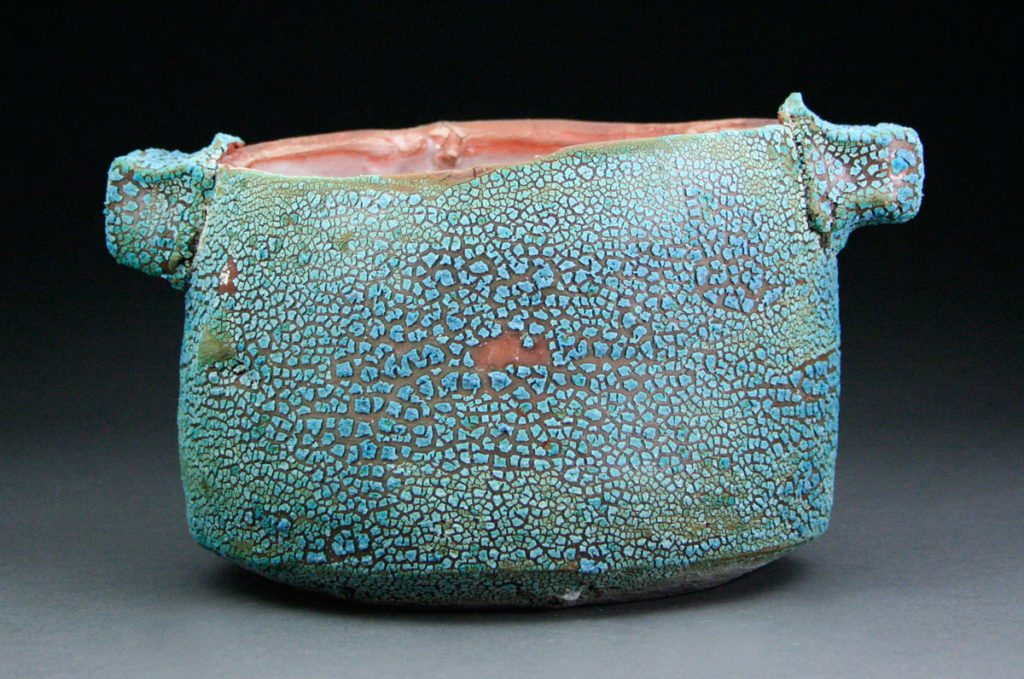 “We’re going to have to blaze a trail, so I’ll just go and grab my machete.”

Darren Emenau disappears into the basement of his Saint John home to retrieve the tools we’ll need for the day’s expedition of digging local clay from a beach on the St. John River.

“I love having these secret little spots that are close to home,” Emenau, a potter and ceramic artist who works under the phonetic tag MNO, says as he crashes through the fall forest, overstepping fallen cedars and hacking at dead branches en route to the shore.

“We’ll have to find my shovel,” he says, rustling dry yellow grasses on the verge. “I hid it in the trees here, like, six weeks ago.”

In the woods and on the water, Emenau is in his element, and his sculptural ceramics reflect a deep fluency with the natural world, both in his raw materials—which include locally dug clays and the New Brunswick potash, silica, shale and granite he uses in homemade glazes—and as inspiration for the uncanny textures of certain of his surfaces that mimic moss, lichen and bark. He uses the local clay in its raw form, not processing out other materials such as rocks, twigs and other foreign matter. His relaxed, naturalistic forms are inspired by the medium.

“I have to compromise between what the clay wants to say, and what I want to say.”

Emenau isn’t trying to make a social or political statement through his work, but it doesn’t take a great leap of the imagination to connect it with broader aspects of life in New Brunswick, which has a deep, complicated relationship with nature, both as something treasured for its own sake, as well as its economic value as the natural resources on which the province’s economy has so long and heavily relied. 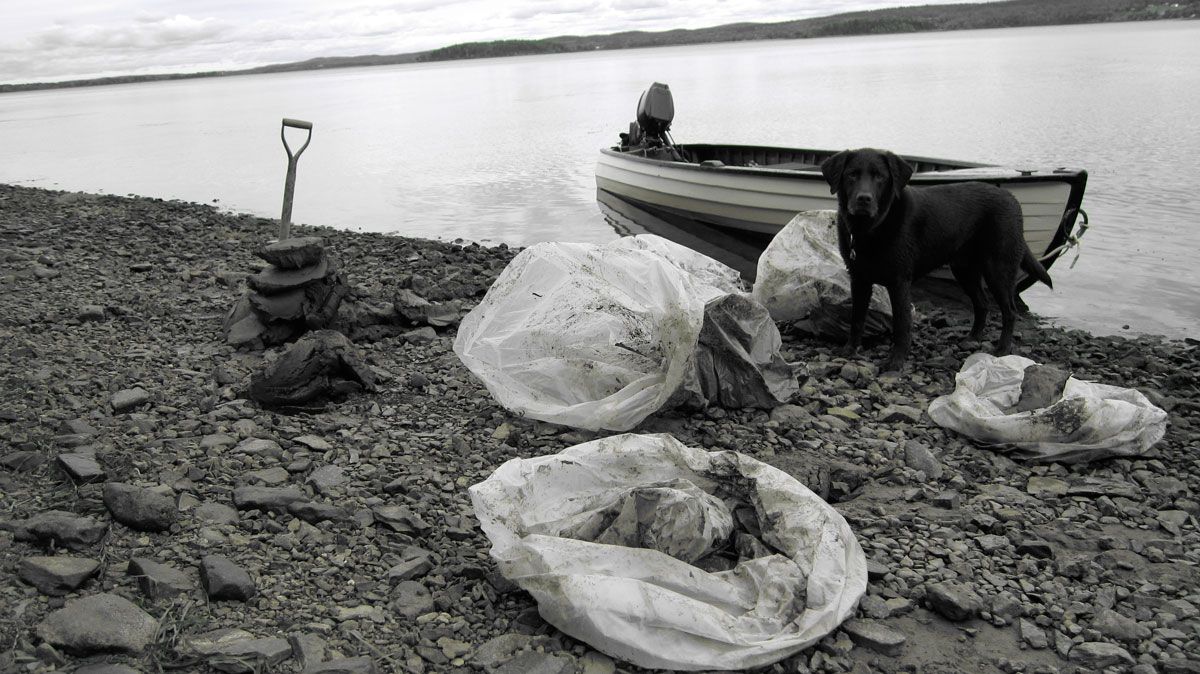 Scene from a day of digging local earthenware on the St. John River; Darren Emenau often goes on such expeditions with his dog, Sam.

Back on the beach, the noontime October sun is beating down as Emenau happily digs, filling big plastic bags with heavy, squishy clay the colour of milk chocolate. Lime-green seaweed makes a carpet on the rocky beach next to the site as he explains how he got into digging clay in the first place.

“It wasn’t on my radar, it wasn’t part of my education, it was something people in other countries did,” he says. A graduate of the New Brunswick College of Craft and Design, in Fredericton, Emenau learned to build pots with the pristine white clay he continued to use when he set up his studio in the late 1990s. But one day he ran out, and liked the idea of a free, natural and nearby alternative.

“Do what you can with what you have, but do it now” is his motto in work and life, so that’s what he did. And he’s glad of it.

“It pushed me in a totally new direction,” he says, branching off from his early production-line series Whimsical and Japanesque, both of which he still makes, into new forms and finishes. He began to work on a larger scale, making sculptural and non-functional works.

The shelves are laden with a range of experiments, including some new ideas that deviate sharply from earlier work: small vessels in surprisingly soft pink pastels; nubby white clay pots dipped in lipstick-red latex. Emenau has a trademark organic style but he is not bound by it; if there’s a constant, it’s his perpetual curiosity. 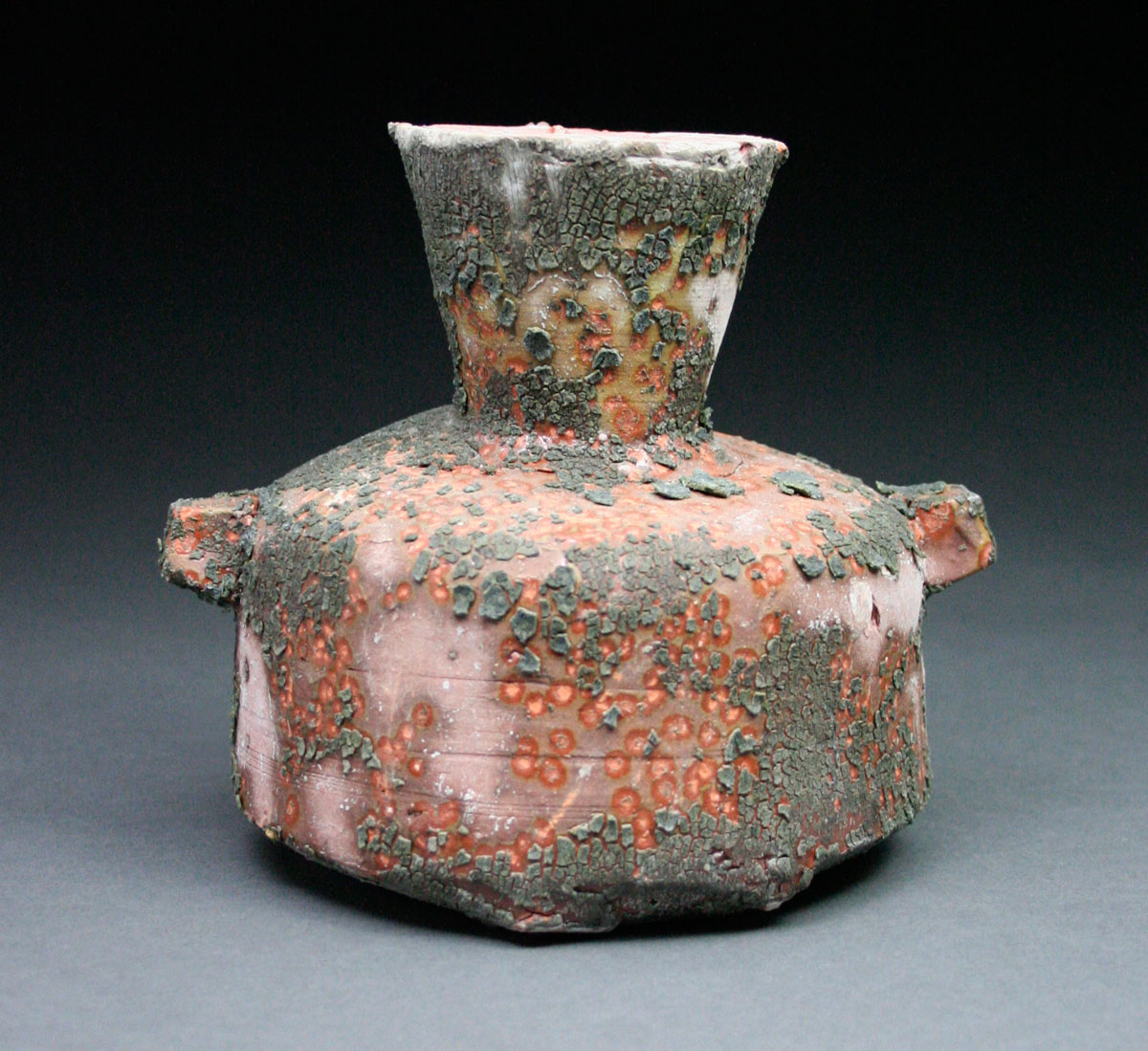 His make-do/can-do ethos is particularly apparent in his Creek House, where he lived for nearly 20 years and still maintains a rural studio tucked alongside ferny Jones Creek. Across the street is the tiny 1800s farmhouse he renovated into a pottery shop, its madly sloping floors a perfect asymmetrical home to his raw forms.

When Emenau began his career, moving to rural New Brunswick seemed necessary. Real estate was super-cheap and land abundant, offering metaphoric space for creative contemplation and literal room in which to experiment with such things as the wood-fired kiln that he built himself. Cobbled together from salvaged building materials and second-hand bricks, the kiln would give a fire marshal heart palpitations.

In typical Emenau fashion, he started the project with no blueprint, just a vague mental plan. He hammered support beams into proximate maples, as if he were making a treehouse. It grew from there, the kiln at the heart of a rambling wood structure that looks like an open-sided sugar shack. 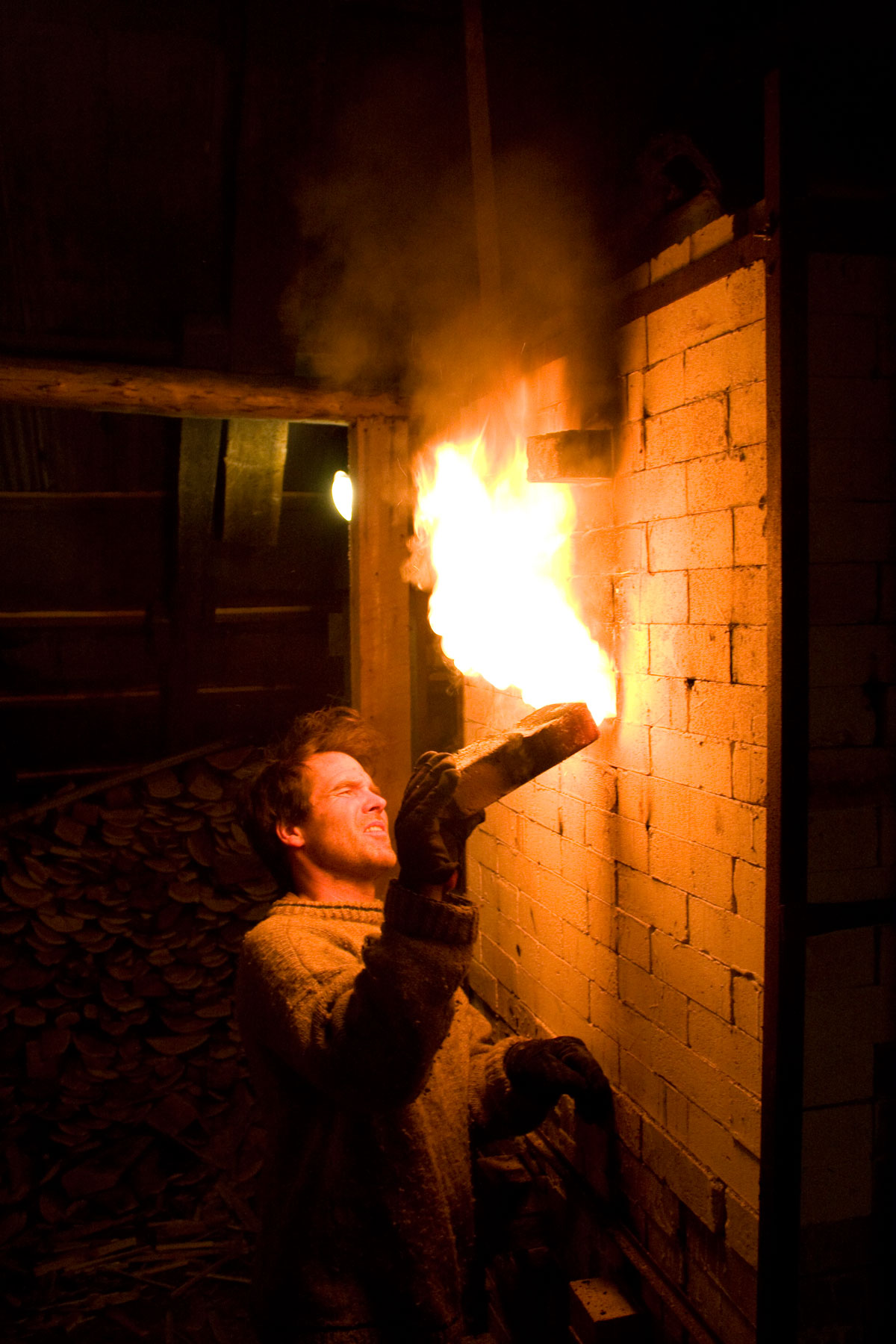 Darren Emenau in 2015 with the wood-fired kiln he built himself.

A serial tinkerer and self-described scrounger, Emenau loves restoring wooden boats to scout the riverside for materials and ideas, including a number of antique bricks he scavenged from a defunct local country clayworks that was established more than 200 years ago. These misshapen forms became the basis of a central suite in “Tributaries,” Emenau’s one-man show at the New Brunswick Museum in Saint John in 2012 and the Beaverbrook Art Gallery in Fredericton in 2013.

Inspired by Jay Isaac, the Toronto-based, New Brunswick–born painter who once did a project reworking old sketches by a Saint John artist that he found, Emenau began glazing and re-firing the old bricks.

As Peter Larocque, the curator of “Tributaries,” writes in the show’s catalogue, the bricks—lumpy, cracked, misshapen—were part objet trouvé, part readymade, part 3-D canvas for glaze experiments that brought further attention to the human and natural processes to which they had long been subjected. Emenau, he writes, “has taken small, utilitarian bits of built heritage and turned them into fine objects of decorative art where uniformity is not desirable but individuality is more meaningful.”

These brick pieces, like so much of Emenau’s practice, reflects the artist’s interest in the imperfect, unintentionally situating his work in the current craze in the popular culture for the handmade, the authentic, the artisanal. But MNO has been doing this for almost 20 years, making his work an argument against the bland sameness of mass production and for the unique aspects of the imperfect.

Laroque articulates the connection between Emenau’s artistic process and the cycles of nature, particularly in Freshet, an assemblage of natural elements and ceramic cylinders.

“It is a statement of continuity as well as a deferential nod to the capricious vagueness of chance,” Larocque writes. “This work celebrates the processes inherent in the landscape which informs his work. He chooses to replicate the subtlety and beauty of something that is often overlooked.” 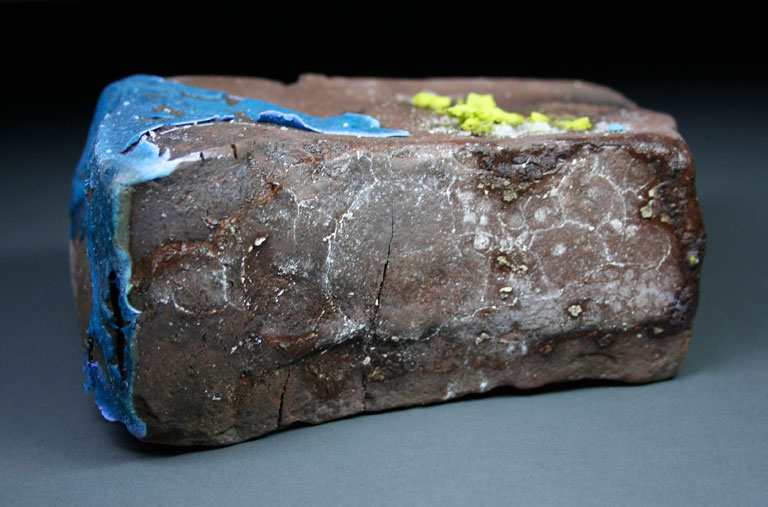 A few years ago, Emenau made a move to the city, shocking many of those who deeply associated him with his country context, and saw his rustic existence as a sort of romantic idyll: man in nature with his dog, his axe, his art.

He doesn’t miss his old life the way he thought he would, mostly because it doesn’t feel lost to him.

“I bring the creek with me,” he says.

Emenau is very content in his current digs, a 1938 bungalow in an established west-side Saint John suburb that he shares with his wife, Nora, and three-year-old daughter, Lucy. In typical MNO fashion, he went all DIY on the basement, now home to a tidy studio equipped with a sleek digital kiln. The creek and its wood-fired kiln is easily accessible, just a half-hour drive away. And even in the city, nature is nearby: five minutes by car to the Bay of Fundy, which has the highest tides in the world, or the St. John River, which has been called the “Rhine of North America.”

“To me, what’s romantic is just jumping in with two feet, and not saying no,” he says. “You get yourself in a position where you’re committed and you’ve got to do it. There’s no turning back.” 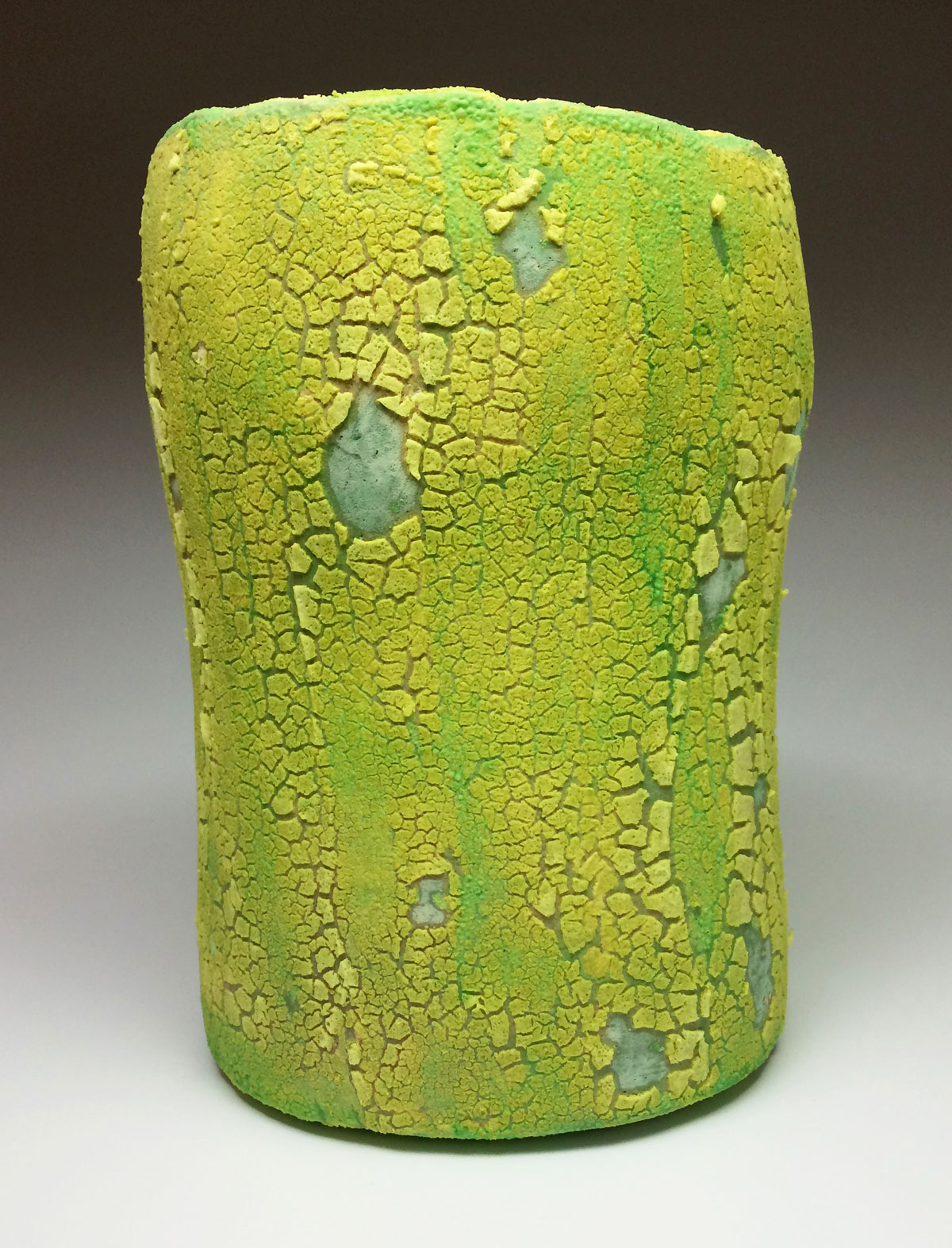 He has a bit of the mad scientist about him, the studio as laboratory for creating new glazes, new forms. This love of problem-solving and making things is a constant, celebrating process as much as product. He doesn’t separate the pleasure of splitting cords of softwood for his kiln from the satisfaction of throwing and firing pots.

This spirit of experimentation attracted the attention of George Kinghorn, executive director and curator at the University of Maine Museum of Art, in Bangor, where Emenau is part of “Contemporary Currents: Nine New Brunswick Artists,” a group show on display until December 31 that aims to demonstrate to New Brunswick’s closest American cousins the quality and plurality of contemporary art in the province.

“That element of chance, that element of uncertainty, that active experimentation is very thought-provoking and it’s very appealing,” Kinghorn says by phone. “It’s not unlike the approach to abstract painting where one doesn’t start out with a preconceived idea, but things happen throughout the creative process.”

Kinghorn says his curatorial position favours artists that blend technical mastery and conceptual intent. In Emenau’s work, “those come together on a seamless plane,” he says.

Kinghorn chose three large Emenau works for “Contemporary Currents”—tubular, archaeological-looking vessels, one glazed deep turquoise, another’s rosy clay mottled with lichenous green flakes, the other a white study in textures—and delights in their contrast with the pristine white setting of the gallery. 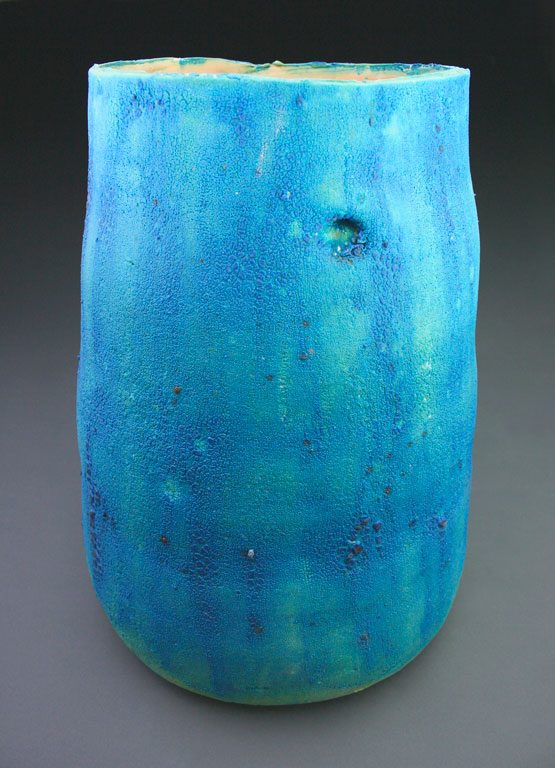 Emenau has a particular knack for moving ahead without abandoning past success, balancing city and country life; functional and sculptural forms; analog and digital in the case of his wood-fired and electric kilns; natural and synthetic, in the case of a new series that incorporates latex and other non-clay materials.

“You don’t have to reinvent the wheel every time,” Emenau says. “But that wheel has always got to be moving.”