#BlackLivesCDNSyllabus, a crowdsourced anti-oppression project, has some great reads from old art mags. What is its impact in the art world and beyond? 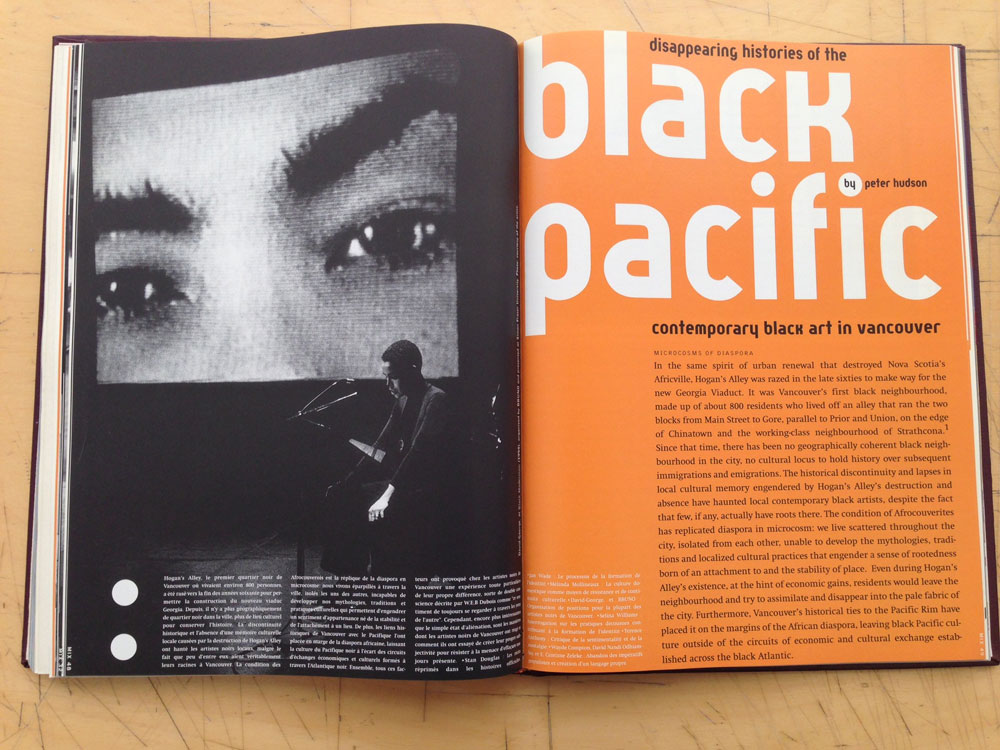 Toronto Pride climaxed this year with Black Lives Matter halting the Sunday parade, and demanding the elimination of the presence of police, who are seen as an oppressive, harassing presence to queer people of colour. The intervention was criticized, mostly by white people, for its “inconvenience,” with debates raging over whether BLMTO’s tactics helped or hindered their cause.

Many Canadian scholars, writers and poets have since had a hand in compiling this list of resources, which aims to “educate people about anti-Black racism and realities in the Canadian state,” according to Monique Woroniak, who compiled the syllabus in Storify format.

Crowd-sourced syllabi are acts of resistance. Circulating collective knowledge online can assert and centre marginalized histories—within spaces and narratives that continue to brush their existence aside. #BlackLivesCDNSyllabus asserts a comprehensive inventory of Black Canadian history into the Black Lives Matter discourse. Contributions range vastly, from classics such as Frantz Fanon’s Black Skin, White Masks, to listings of work by notable Black Canadian scholars, artists and educators such as former Toronto Poet Laureate Dionne Brand, prolific Black Nova Scotian documentarian Sylvia Hamilton, academics Cecil Foster and Charmaine Nelson, and artist Deanna Bowen, among others. Topics are specific—Black-Mi’kmaq relations in Nova Scotia, the razing of Africville by the City of Halifax in the second half of the 1960s, the Caribbean diaspora in Toronto—as well as general.

#BlackLivesCDNSyllabus includes archival issues of art publications Mix Magazine and FUSE, from the collection of Dr. Cassandra Lord, Assistant Professor of Sexuality Studies in the Women and Gender Studies Program, Historical Studies department at the University of Toronto. “My practice for inclusion is one that simply seeks to make the work of black queer and trans people visible,” says Lord. “Hence my research focuses on the black diaspora and our contributions.”

Editorial resident Merray Gerges interviewed Lord about her contributions to #BlackLivesCDNSyllabus and the vitality of virtual syllabi in anti-oppression activism.

MG: Has visibility for Black Canadian artists changed ever since these now-defunct Canadian art magazines were published in the ’90s and ’00s?

What publications such as Mix and FUSE aimed to do was to seek out and feature Black, Indigenous and people-of-colour artists (BIPOC). That also came about based on who was on the collective/editorial board. It took having BIPOC on the inside to create dialogue, coupled with internal struggle, to demand change.

MG: If you were to sort through more recently published material, would it look any different for Black Canadian artists?

CL: Sadly, no. At the same time what happens in the art world is a microcosm of what happens in other institutions, for example education—particularly at the university level where there is an underrepresentation of Black professors in Canada.

MG: The virtual syllabus includes mostly academic citations, rather than hyperlinks. While it’s crucial to insert the existence of these materials into Canadian academia, how can non-academics access them?

CL: This is important to address. The medium being used was Twitter, and the contributors were responding in real-time with info we had at our fingertips, from different locales. The art and cultural production resources came for my own collection that I have, in an informal way, archived over the years. What you have suggested is creating a longer-term digital project. This could be supported by those of us in the academic community with access to financial resources. We would work with someone who would be willing to take on the challenge.

In the meantime, I wouldn’t be opposed to people reaching out to me. I would be more than willing to make my archives accessible.

MG: Could you speak to the potential of digital labour and knowledge-sharing as an anti-oppression gesture?

CL: I’m glad you use the term “labour,” as digital archiving is indeed labour which should be compensated, but often goes unpaid. The cultural producers that created the work—writers, artists, cultural critics, academics—used their labour to create new forms of knowledge often hidden from the historical narratives that have tended to exclude BIPOC. What we were doing was providing an archive which has always been there, but goes unnoticed, and is not valued.

MG: With #AllLivesMatter rhetoric, white people like @NotKTAlexander on the Internet are panicking, claiming that, “Blacks have no legitimate racial grievances in Canada,” which is obviously not true. Why, actually, are white people freaking out about #BlackLivesCDNSyllabus?

CL: I don’t understand how putting forward a Black history of struggle and cultural production could cause such a stir. The response speaks to the ways in which Black Canadian contributions are not valued or seen as Canadian history—and this is what the respondents should be interrogating.

@LordPhD Dr. Lord I raise you one more. We still on the margins of Oh Canada. #BlackLivesCDNsyllabus pic.twitter.com/UH1kJBGnvT

A clarification was added to this article on July 18, 2016. The initial article did not mention Anthony Morgan, originator of the #BlackLivesCDNSyllabus hashtag.