Miami by Air: An Interview with Bill Burns 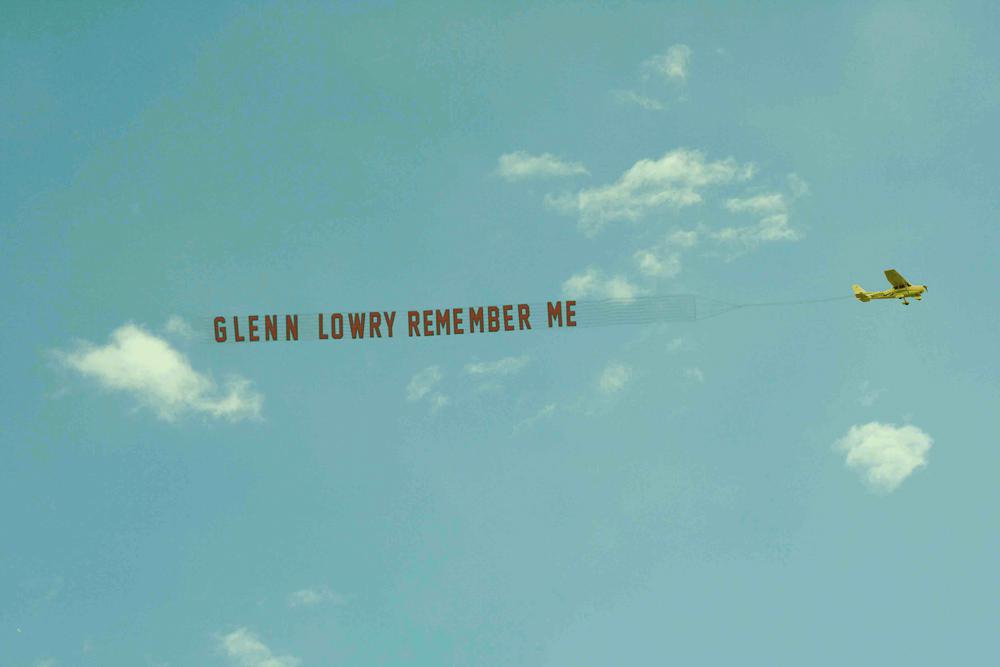 For Miami fairs week, Canadian artist Bill Burns plans to fly banners with satirical pleas to international curators over South Beach; it's partly a comment, he says, on “a curious mixed economy in the art world.”

Canada promises to have an amusing (yet critical) presence at this week’s Miami fairs via Toronto artist Bill Burns. Over the past few years, Burns has produced drawings, postcards, sculptures, watercolours and digital mockups related to the art world’s ever-burgeoning power structures. In recent years, these works have included a proposal to affix a large sign reading “Hans Ulrich Obrist Priez Pour Nous” to the roof of Tate Modern and an installation in which the names of David Zwirner, Jeff Wall and others are carved into wooden logs. In Miami, Burns has hired an airplane to fly over South Beach with banners carrying messages like “Beatrix Ruf Protect Us” and “Adam Weinberg Remember Me.” Here, he tells us more about the project.

David Balzer: This air-banner project emerged from a digital mockup of a small plane trailing the message “Glenn Lowry Remember Me.” I’ve heard there are air banners that frequently fly over South Beach advertising various things, like drink specials…

Bill Burns: It’s my first time in Miami, but yes, I hear it’s a real culture of air banners.

DB: So there must have been something about this that triggered your choice to bring the mockup image to life in South Beach during the fairs.

BB: There could be other possibilities, I suppose, but Art Basel is the kingpin of a certain part of the art world and certainly the centre of commerce in a lot of art has moved to the fairs—from bricks-and-mortar galleries to more ephemeral settings. This aspect of the new economy intrigues me.

DB: There’s an irony to the project insofar as the banners are appealing to these power curators and power directors, but in the context of an art fair, there’s not a broad understanding of how these people fit in, or what they do.

BB: It’s true that curators over the last 200 years have been understood as taking on a kind of public-service role. They’re part of the public sector. Now there’s a curious mixed economy in the art world, where a curator’s job is often, at a fair, to cajole a collector into buying something for a museum—which I’m sure, for many, is not very pleasant. Artists, curators, collectors: we’re all part of a regime. I’m part of it as well. You are too.

DB: Do you know for certain that any of the figures to whom you are appealing on the banners will be present in Miami this year?

BB: I have no clue, actually. The fairs are very big events but they take a certain kind of personality to enjoy, like going shopping at Christmas.

DB: How hostile are you really towards the power elite of the art world? Is this project embittered? Sour grapes? Playful?

BB: All of the above. I also have a considerable respect for those people who are doing these public-service jobs. There’s a complexity to it and the economy we work in. All the people I’m appealing to I actually have genuine respect for, and I like the projects they’ve done in the past. We’re part of a larger discourse, and players in a larger set of economic relationships. Maybe I do have a bit of bitterness, but I try to bring out my Buddhist when I have setbacks. The banners, for me, are very much playing a role: they’re a narrative construction, the voice of a slightly naïve, embittered brown-noser.

DB: In making these names monumental, are you commenting on how curators have become brand names in the art world, arguably to a disproportionate extent? Does this concern you?

BB: Yes, it does concern me, but I think branding is a factor for all of us at this point. Artists have this issue; I wouldn’t want to point fingers. My role as an artist is often trying to get the attention of curators. All of our roles collapse into a kind of miasma of late capitalism. It’s a function of discourse rather than individual careerism. That said, there are always people who have more drive and ambition, and even luck, than others.

DB: I’m curious to know how you’re funding this. Your dealer Michael Klein, of MKG127, will be in Miami, but this is an artwork that can’t be purchased—at least not at the fairs.

BB: Michael doesn’t have a booth, but I’ll have some postcards at the booth of Katharine Mulherin, and at that of Mendes Wood from São Paulo. The postcards are connected to this project.

I have some champions who’ve helped me. Two of them are collectors who are family members. A group of Toronto arts supporters is also co-financing the project. And then Michael Klein has kindly offered the chesterfield at his parents’ condo in Fort Lauderdale. That’s typical of how I fund projects—putting together a consortium of interested parties. I’m very grateful for this. It’s one of the ironies of being critical of capitalist art production: nothing really feels better than selling! I get to think about my place in the world, and how that works.

Bill Burns’s air banners are scheduled to fly over South Beach in Miami between 3 p.m. and 4 p.m. on December 4, 5, 6 and 7. Watch our site for more Miami fairs coverage by Canadian Art associate editor David Balzer in the coming week.