The Artist Who Reclaims What ISIS Has Destroyed

Iranian-American artist Morehshin Allahyari uses 3-D printers to bring ISIS-destroyed artifacts back to life. Now, she offers them in a Toronto world debut. 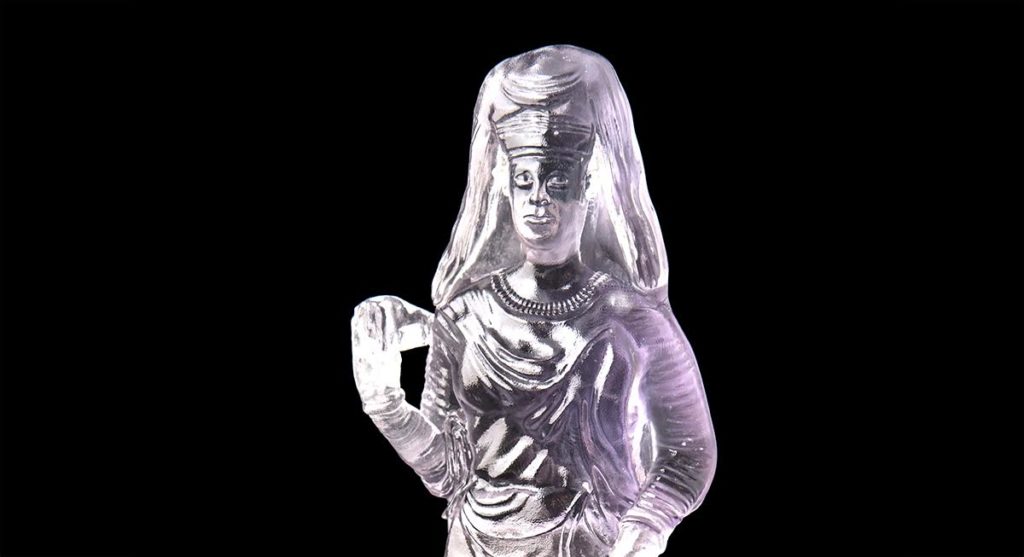 It’s often said that ISIS is one of the most visually savvy terror groups in the world. Their films of beheadings have high production values, drawing on the history of film and photography to construct compelling (if terrifying) images and narratives.

It’s also clear that ISIS (like other violent forces both prior and contemporaneous to it) is aware of the power in art and culture. It has destroyed historic cultural sites and museums—places where artifacts thousands of years old were intended to be stored for future generations.

Finally, ISIS has turned the Internet very effectively to its own ends, using social media and Youtube to publicize their activities and recruit new supporters.

This scenario makes a series of sculptures, having its complete-series world debut tonight at Trinity Square Video in Toronto, particularly poignant and poetic.

For the series, Iranian-American artist Morehshin Allahyari has reconstructed, via 3-D printing, 12 of the artifacts that ISIS destroyed in 2015 at the Mosul Museum, Hatra and Nineveh.

Printed in clear plastic, each artifact takes on a ghostly quality that evokes the dynamics of presence and absence, lost and found, disappeared and reappeared, ancient and contemporary.

What’s more, Allahyari has seeded the project with the potential to reach around the globe—on Monday, February 15, on Rhizome.org, she will release the first of several freely downloadable files that will permit anyone to reprint these objects (given the proper technology), and to learn more about them.

The clear quality of each sculpture’s plastic also allows viewers to see a flash drive or memory stick embedded within. These contain research documents the artist has compiled about the history, meaning and location of the original artifact—a kind of “time capsule” that gallery visitors can also download via a USB altar.

Confronting the Challenge of Reconstruction

One of the main challenges Allahyari faced in this project was locating reliable information about what artifacts had been destroyed—sometimes it was even difficult to ascertain what their proper names were, let alone their meaning, history or physical details.

“In general, the problem with this project has been the lack of information,” Allahyari explains. “Which you would think for artifacts that are almost 3,000 years old shouldn’t be a problem. But from the Mosul Museum being underfunded and understaffed for many years to Iraq being under war for more than 30 years,” she encountered problems “in terms of scholarship and knowledge around that area.”

As a result, Allahyari reached out to several researchers including archaeologists, anthropologists and historians specializing in Middle Eastern art.

She finally got her big break around five months ago: “I finally found two of the former staff of Mosul Museum who were able to send me a list of all the artifacts—everything that was in the museum.” Even so, that information “would not match to the information the scholars had” in all cases.

Tracking down the basic physical facts she needed to create a well-printed object was a further complication.

“There’s software where you can, if you have 25 to 30 images of an object from different directions, create a 3-D model,” Allahyari says. But that “was impossible with this project because the artifacts were lost, no one 3-D scanned them, no one documented them.” The most images she could find for an object was 10, and they were usually taken from the front.

Feeling Through the Emotions of Recovery

Choosing which objects to re-create was another problem, given that so many thousands had been destroyed. In the end, Allahyari settled on objects that had a personal and emotional resonance for her.

“I was looking at images, trying to read stories or find stories that I, as an artist from the Middle East, connected with,” says Allahyari. “King Uthal and another artifact named Ebu—they have this kind of [raised-hand] gesture of praying, but also kind of hello-goodbye, that I found very poetic and beautiful.”

The process of re-making the objects—each of which took 20 to 30 hours to print—also proved surprisingly moving for Allahyari, as the final stages of the 3-D printing process evoked a physical re-excavation of the past.

“When you print something, it has this stuff called support material all around it,” Allahyari explains. “So when you take it out, you have to go through this process of cleaning, and this process of cleaning, in a way, felt like digging out this thing. It had this kind of archaeological experience because you were cleaning and digging and that whole act was a really interesting act for me.”

Allahyari’s desire to include the research information about each object on microchips within each artifact, and make the objects transparent so that microchip could be seen, also had a poetic aspect.

“You can see this information being saved,” Allahyari says, “So there is something about the relation between knowledge and power and keeping this information and I found that a really important aspect of the project.”

Distributing the information freely online—which she plans to roll out over the next year once the digital archiving technology has been worked out—also has an emotional dimension.

“I think the more people who have access to these things the more interesting and exciting it is,” Allahyari says. “The more people save these—even only the digital files on their computers—or look through the PDF files, look at the map, that is very important, this notion of sharing and spreading something that has been destroyed.”

“And then printing it is another aspect” for those who download the files, Allahyari explains, “because then they are bringing this to actual physical life. So every act of 3-D printing is maybe an act of resistance in that way.”

Material Speculation: ISIS (as this series of clear plastic sculptures is officially titled) is just the latest manifestation of Allahyari’s 3-D Additivist Manifesto—a document she has co-authored with researcher Daniel Rourke that calls on artists, activists, designers and engineers to accelerate the 3-D printer “to its absolute limits in the realm of the speculative, the provocative and the weird.”

“What does it mean to use a new technology in a poetic way, but also in a practical way resist this kind of violence? And respond to it?” Allahyari asks. “As artists as activists, I think it’s really important for us to respond to what happens around us.”

At Trinity Square Video, Allahyari and Rourke’s 3-D Additivist Manifesto is actually presented in the form of a video projection that shows various 3-D printable objects—from Duchamp’s urinal to a child’s magical unicorn—floating in a sea of dark liquid.

Allahyari is not alone in her belief in the potential of 3-D printing to radically change the world—or at least how we think of it.

Much of Material Speculation was created out of an artist residency at the San Francisco headquarters of Autodesk—the company that jumpstarted computer-aided design in the 1980s with AutoCAD software, and is now a world leader in CNC milling and 3-D printing technology.

Autodesk’s artist residency program is sizeable, accepting 16 artists per four-month session, with an additional roster of 23 affiliate artists such as Allahyari. Each resident receives a stipend of $2,000 per month, and at the end of the residency they must publish their work on Instructables.com, the MIT-spawned site that allows free access to how-tos of all kinds.

Still, while Allayhari sees the potential of 3-D printing to manifest concepts and objects that have been outlawed or otherwise disappeared, she says she is also deeply aware of 3-D printing’s dark side, too—like its connections to what she calls “petropolitics” through the plastics industry.

“In general, I’m really interested in these more radical political ways that you can think about a radical technology like 3-D printing, because it’s a tech that’s filled with hope and promise, but there are also these very dark sides to it,” she says.

“There are both these utopian and dystopian aspect to a technology like that, and ways we can apply it and use it…. I think there are a lot of banal, useless things that are happening around 3-D printing and technology, and we were really interested in pushing that” with the manifesto, she says.

While Allahyari is generally pleased with how her Material Speculation: ISIS project has turned out, she does have concerns about it—concerns she hopes to address in a panel on Saturday, February 13, at Trinity Square Video.

One of the concerns Allahyari has about her latest project is that some people have chosen to interpret it as being implicated in or complicit with the wave of Islamophobia that has swept through Europe and other places in tandem with the resettlement of Syrian refugees desperate to flee the violence in their homeland.

“As I continued working on the project, one of the things that kept on coming back to me through press or just thinking about this project was how the exact same thing has happened with the US military—they destroyed so many artifacts and museums and arts and culture sites in Iraq, for example. In my head, it was always clear that I see that and I’m critical of that equally—but with a project like this there is always the chance of people being like ‘Look, look at what these terrorists are doing,’” and only focusing on that.

In a related development, Allahyari says her next project will have to do more directly with resisting or responding to Islamophobia, which she herself has been the victim of.

“Definitely the next research I am doing will be very related to Islamophobia,” says Allahyari. “In a very different way that has nothing to do with cultural artifacts.”

Another concern Allahyari has relates to what she calls digital colonialism—the tendency of 3-D artifact scanning projects to land in private, rather than public, hands.

“One of these challenges or things I find problematic with a lot of projects that are saving cultural heritage is this relationship between digital colonialism and these artifacts and digital archiving…because I think there is a sudden movement with all these technologies, like 3-D scanners, that all these companies are going to the Middle East and ‘saving cultural heritage.’ But no one is asking where these files are ending up, who is owning them.

“I think ownership in that way is a very dangerous territory to enter.”

This is what made it important for Allahyari to release the Material Speculation: ISIS printing plans to the public via the USB altar in the gallery and, eventually, online.

“It’s very important for me to keep this access,” she says.

Morehshin Allahyari’s Material Speculation: ISIS has its complete-series world debut at Trinity Square Video in Toronto tonight (February 11). It exhibits there until March 19, with a panel on February 13.