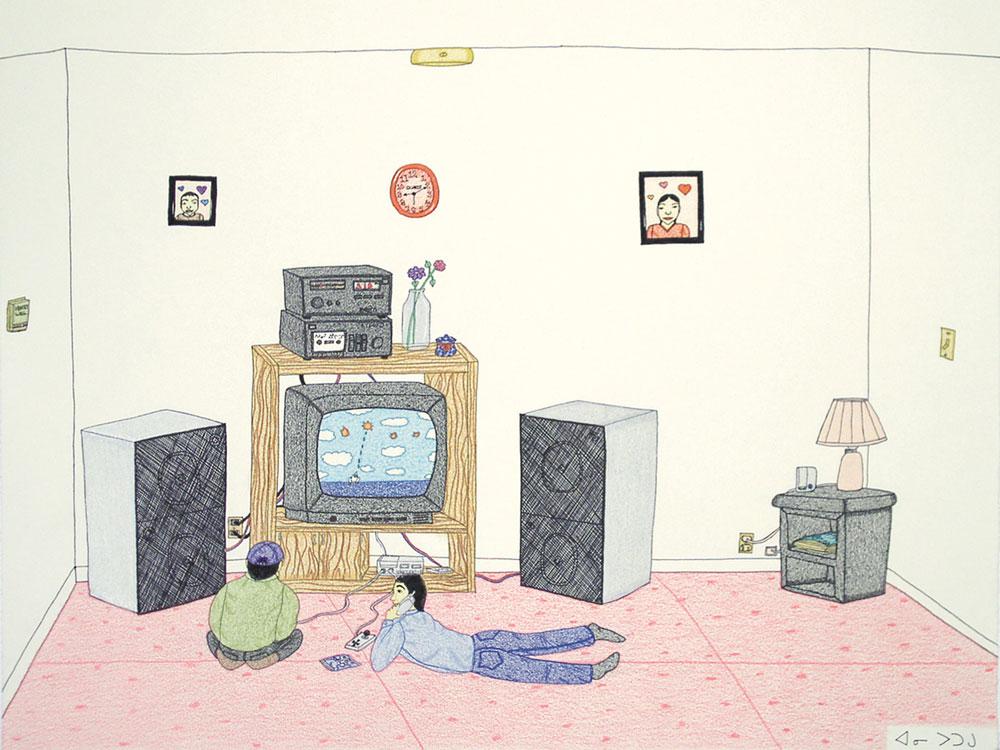 Annie Pootoogook has passed away. Inuit everywhere in Inuit Nunangat (the four Inuit regions of Canada) mourn her passing, even as we celebrate her life and accomplishments. Pootoogook was a hugely influential artist who forever changed the face of Inuit art. For that, we owe a huge debt to her artistic legacy.

I only met Pootoogook a handful of times during the seven years that I lived in Ottawa. As an Inuk then-grad student studying Inuit art history, I was a little in awe of her fame and talent. Even during our few encounters, I was struck by her kindness and openness.

Judging from the outpouring of grief and remembering across social media this past weekend, many here in southern Canada also feel the same. I join the many voices from across the North and South in offering my sincerest condolences to her family during this difficult time.

I did not know her personally except in the way that we all knew her, through her art. Instead, I have written this short tribute as an Inuk art historian, in recognition of the major and lasting contribution she has made.

Pootoogook’s legacy is significant. She permanently transformed the landscape of Inuit art by breaking through the “ethnic art” glass ceiling and firmly establishing contemporary Inuit art in the mainstream when she won the Sobey Art Award in 2006.

Following an exciting period of exhibitions at Feheley Fine Arts, Pootoogook’s landmark solo exhibition at the Power Plant led to her nomination, and subsequent winning of, the Sobey, catapulting the artist to international fame. This was followed in quick succession by an international residency and inclusion in the Montreal Biennale and Art Basel, all in 2007.

Her stature as an international artist was cemented with her participation in Documenta 12 in Kassel, Germany; she was the first Inuit artist ever included. In later years, her work was shown at the National Museum of the American Indian and in the survey exhibition “Oh, Canada” (2014). With her smart, unpretentious drawings, she captured the attention of the international art world and held it for several years, keeping the door open for other Inuit artists to also enter in the process.

Her artwork is thoughtful, humorous, open, satirical, witty and brave. It brought in new audiences, and new understandings of what Inuit art could be, while showing the North to the South in a manner it had never been seen before.

While much has been made of her works that picture alcohol abuse, suicide or domestic violence, for me, the breakthrough was in her revealing interiors and quotidian scenes. Much like her mother Napachie Pootoogook and her grandmother Pitseolak Ashoona before her, Annie Pootoogook made work that revealed, in intimate detail, what daily life in the Arctic was like for many across Inuit Nunangat.

Her art challenged viewer expectations of igloos and dog teams and instead revealed our “matchbox” houses, laminate-floored and sparsely decorated; the Northern Store with its refrigerators lined with freezer-burned frozen dinners; the quiet activity of the printshop; or lazy afternoons spent watching trashy daytime television imported from far away. She surprised people with her skillful depictions of mundane objects: a bra, a pair of glasses, a pipe or (my favourite) colourful rows of men’s underwear.

Her images de-exoticized the Arctic. Yet, at the same time, they highlighted how truly great the distance is between the lives of southern Canadians and their neighbours in Inuit Nunangat, and how little the South truly knows about the experience of life in the North. Scenes of cutting up raw char shared on the floor, butchering a whale on the beach, or boiling up seal meat or tea on a Coleman stove in a tent or your living room: these are experiences distinct to the Arctic. Annie Pootoogook showed it all. For this tremendous gift, we should all be grateful.

Heather Igloliorte is an Inuk art historian and curator. She is from Nunatsiavut but currently resides in Montreal, where she is a professor of Aboriginal art history and holds a Concordia University research chair in Indigenous Art History and Community Engagement.