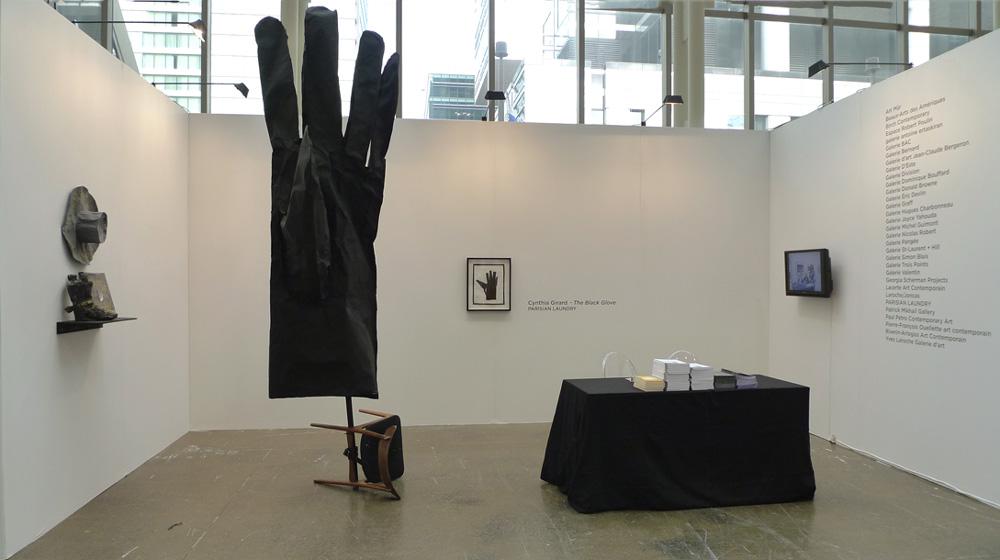 As Canadian Art’s editors have noted in their Art Toronto fair picks so far, Quebec galleries are responsible for some of the most impressive works and booths at the fair.

Even the Art Gallery of Ontario sought them out for most of their acquisitions at the fair, buying works from Galerie René Blouin, Parisian Laundry and Galerie Division (which originated in Montreal and has since opened a second space in Toronto).

Also on the scene at Art Toronto is AGAC, the Association des galleries d’art contemporain—a group of mostly Montreal galleries that is presenting a solo booth by Montreal artist Cynthia Girard (seen in the photo above) and distributing maps of its member galleries at the fair.

“AGAC’s participation to Art Toronto was made possible with market development grant from the Quebec government,” AGAC director Julie Lacroix explains. “As an [non-profit] association of galleries we have the mandate to develop the recognition and prosperity of the contemporary art market in Canada, so it makes sense to be at the place where like all the prominent art professionals and everybody from the Canadian art scene is.”

“A lot of our activity this year is about the crossover between Montreal and Toronto,” Lacroix says.

AGAC also runs its own art fair, Papier, in Montreal every spring. Lacroix says she thinks of it as a complementary event to Art Toronto in that it looks exclusively at works on paper, which are generally more affordable than other artworks and therefore are uniquely positioned to encourage cultivation of new collectors in the Montreal area.

Papier also has a focus on Quebec and Canadian dealers rather than trying to bring in international ones as Art Toronto does.

“We define Papier as a complementary show,” Lacroix says. “It’s like in New York, the Armory is the real international fair, then there are Volta and other smaller ones.”

In fact, when asked how AGAC’s members would like Art Toronto to grow or change, Lacroix says they wish for even more international involvement.

AGAC members feel “Art Toronto has a good potential of developing even more on the international art scene,” Lacroix says. They also think “it should maintain or make efforts retain the finest selection of artists and galleries every year, because some major galleries are not at Art Toronto.” Overall, Lacroix says, her members would like “to meet with international professionals more” at the fair.

This story is part of our daily Art Toronto fair coverage. To read more, visit canadianart.ca/arttoronto. Also join us at Booth 940 to pick up our special Art Toronto edition.