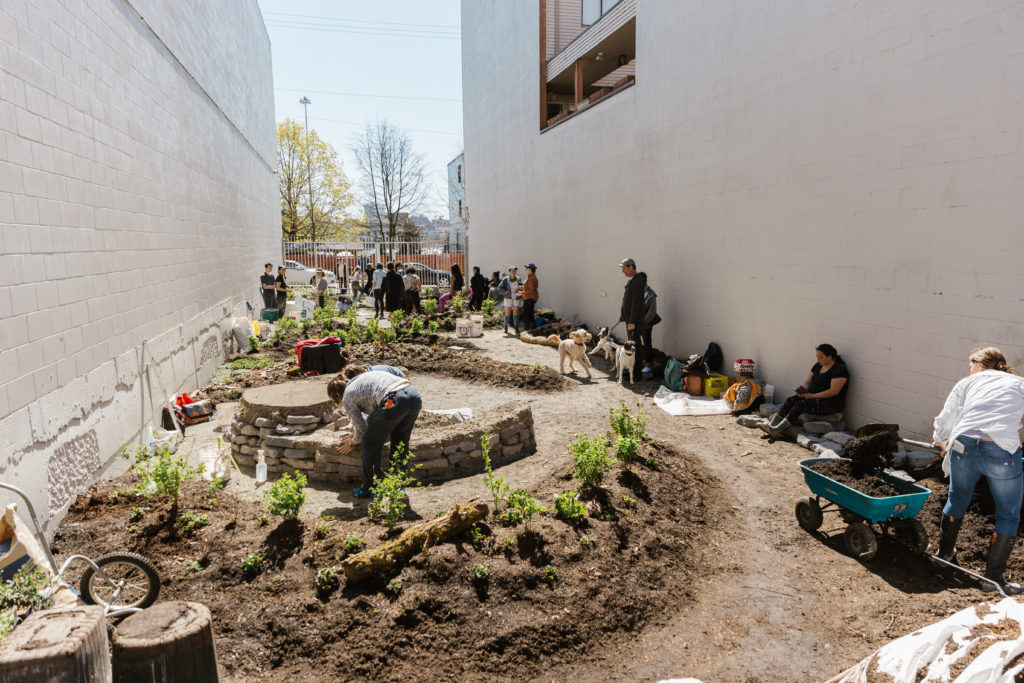 T’uy’t’tanat-Cease Wyss is an artist, ethnobotanist, educator and activist of Skwxwú7mesh, Stó:lō, Hawaiian and Swiss descent with a practice of more than 30 years. To write about a work by Wyss is to establish a single narrative, and in doing so, to close its radical openness. Along these lines, to write about Wyss’s project at Semi-Public 半公開, “x̱aw̓s shew̓áy̓ New Growth《新生林》,” is to freeze its energy, and I do not have the authority to do that because I was not a part of the collective the work grew out of. I am, however, writing this text out of the utmost respect and admiration for Wyss’s practice, and hope it will foster possibilities of more contact with this work. Indeed, contact is the work of “x̱aw̓s shew̓áy̓ New Growth《新生林》”; connections with the community and the land are essential to Wyss’s vast and extensive practice beyond her installation at Semi-Public 半公開.

The site, made as part of Wyss’s 14-month fellowship with 221A, is a public garden containing the local biodiversity of the unceded lands of the Skwxwú7mesh (Squamish), Musqueam and Tsleil-Waututh Nations. Among the multiple species found in the garden are several types of berries, shrubs like oceanspray, Indian plum and kinnikinnick as well as flowers such as yarrow, wood sorrel and wild rose. The work’s composition is based on permaculture movements, an approach that considers the varied and interconnected forms of life and things in the ecosystem—which is to say, everything. It would be impossible to write fully about permaculture’s boundlessness, in part because the English language isn’t engrained with understandings of holistic interconnectivity like those contained within Indigenous knowledge systems such as those of the Skwxwu7mesh, Musqueam, Tsleil-Waututh and Stó:lō. English provides a narrow framework for non-Western, Indigenous relational understandings of togetherness and contact that are distant from Western thought; writing about “x̱aw̓s shew̓áy̓ New Growth《新生林》” in English limits its potential. 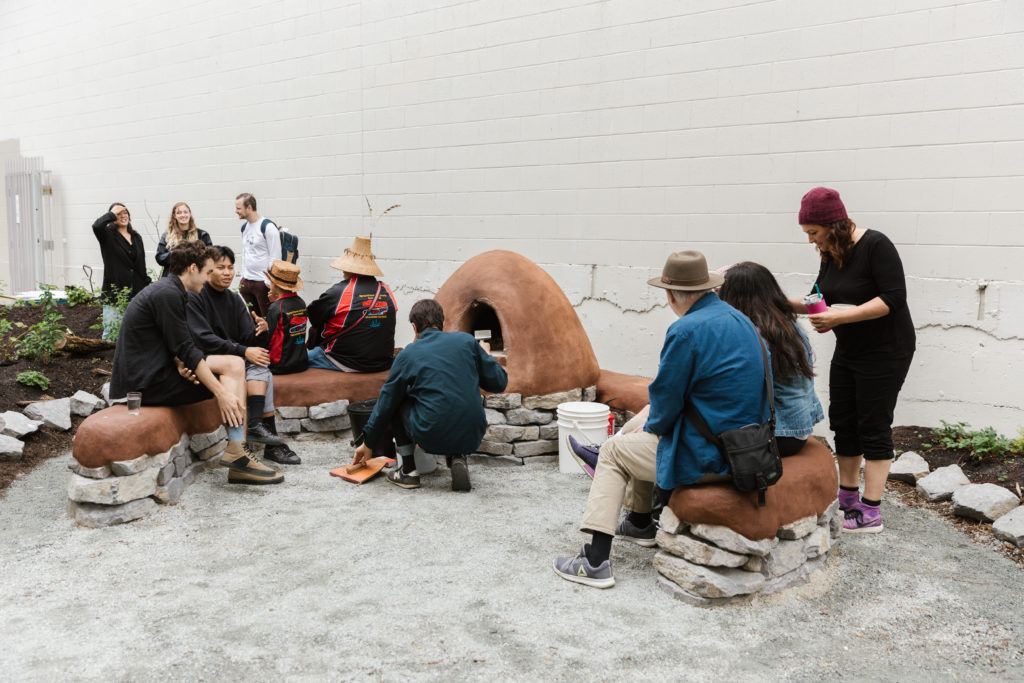 The permaculture space in “x̱aw̓s shew̓áy̓ New Growth《新生林》” is arranged in the form of traditional Coast Salish design elements. Two cameras record the space 24 hours a day, and its feed can be accessed online though the Semi-Public 半公開 website. However, the total garden design is not completely visible in the video, or to visitors as they walk through it. One would have to see the space from above in order to observe the Coast Salish-inspired shape. This design is not made for the possessive indulgence of a removed gaze, but rather for the land and for the community. The site’s wall text shows a rendering of the Coast Salish wave-like shape that organizes the garden, delineated by the main path visitors follow. However, there is no further sense or signage of the way the body should be directed, or hierarchical structures for movement.

Wyss has created a space for things that have happened, for things that will happen and for unpredictable things to arise. A welcoming ceremony and blanket ceremony, workshops, youth-led public programs and artist talks ensured that “x̱aw̓s shew̓áy̓ New Growth《新生林》” was made collectively. Youth participants in a mentorship program—which continues to engage the community in ongoing transformations of the space—were particularly influential to the garden’s initial growth. All parts of the garden are grounded in a dialogue with a history of land art and decolonization of the land.

As a visitor living on the lands of the Coast Salish peoples, I have learned that I must work to be a good relative to those whose lands I occupy, and to be grateful for plants and their teachings. Teachings are nurtured in Wyss’s garden: “x̱aw̓s shew̓áy̓ New Growth《新生林》” is a space where alternative forms of working and being together are not only made possible through the garden’s intention of being a communal place, but especially through what its existence implies. For a moment, it has broken the city’s colonial architectural desire to normalize the theft of land and to erase the histories and traditions of the Coast Salish peoples. Wyss has counteracted the violence and appropriation of the English language and the Western image. By nurturing the plants—which “are our teachers,” as she says in Kamala Todd’s short film Indigenous Plant Diva (2008) (free to watch online)—Wyss is trying to bring back what was once vast in these lands, thus restoring the power of our plant teachers.

Oscar Domingo Rajme is an artist from Mexico City, currently living as an uninvited guest in the lands of the Musqueam, Squamish and Tsleil-Waututh.