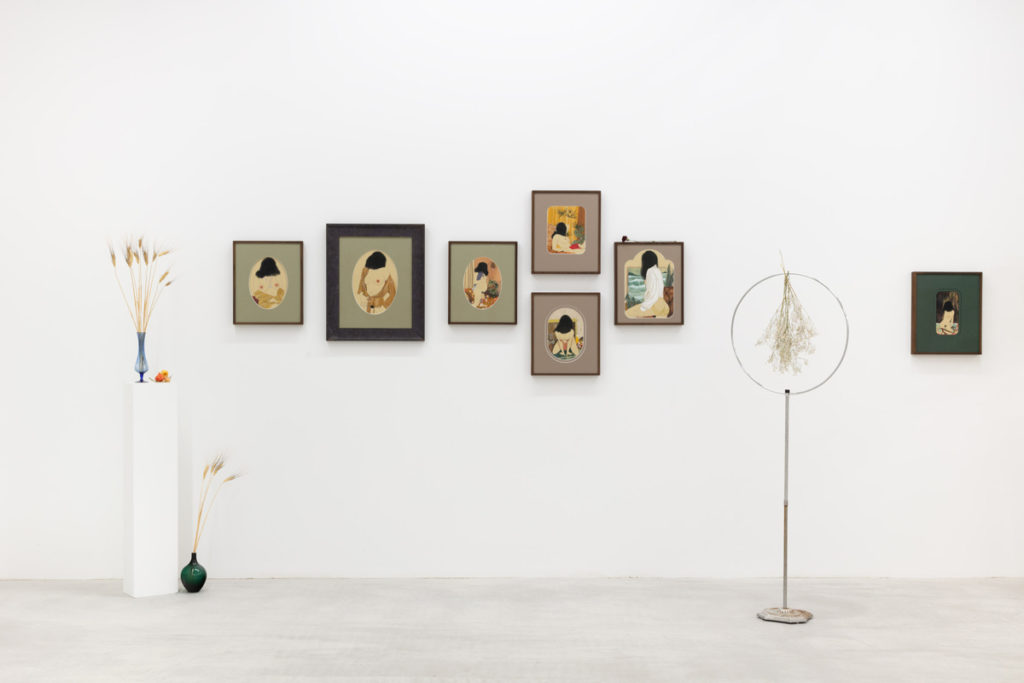 Entering “Golden Girls,” Mia Sandhu’s latest solo exhibition, felt like stepping back into another era. Surrounded by dried plants and flowers, kitschy wallpaper, glass vases, decorative birdcage and small votive offerings, the artist’s 24 new works on paper (all 2020) navigated the pleasures and pressures of female embodiment. Reworking pin-ups and pornographic images of women from the 1970s and ’80s—the so-called Golden Age of Porn from which the show takes its name—Sandhu carefully layers pencil, watercolour and gouache to create a collage-like effect, the topmost layer of which is a frenetic scratching of black charcoal over the figures’ faces. From afar, the black halos surrounding the figures’ faces have a menacing effect, as though the portraits have been defaced or attacked. On closer inspection, there is a wispiness to the application of the charcoal that suggests a gentle form of protection, granting these exposed subjects a subtle form of opacity and a right to an inner life away from the viewer’s prying gaze.

While her earlier work investigated cultural identity as an unsettling force in alien landscapes, there is a surrealist tendency at play in Sandhu’s latest exhibition, where familiar domestic objects threaten to turn into menacing and seductive agents of their own. An overflowing flower arrangement on the hearth of an unlit fireplace distracts from the crouching female form that is undoubtedly meant to be the central focus of Bawdy 17, while Bawdy 15 features a breathtaking pattern along the upholstered arm of a couch, competing with the pregnant nude figure atop it. In another suite of images, multiple subjects appear in the frame, undressing one another, caressing, or kissing, but are shrouded by sumptuously embroidered cloths, evoking René Magritte’s 1928 portrait of lovers embracing beneath white sheets. The cumulative effect is to feel that one is always looking in the wrong place in Sandhu’s rendering of these images, drawn to the seemingly benign objects around her figures that might reveal something about their inner subjectivity.

While extraordinary attention is given to the details of the props, textiles and wallpapers, Sandhu often leaves her subjects’ skin blank, allowing them to take on the colour of the unpainted paper and walls behind them. While camouflaging is normally a strategy of military subterfuge, the performance studies scholar Laura Levin has proposed we think of it instead as a strategy for performing the self in everyday life. Camouflage, she writes, is a task most often projected onto women, who are expected to embed themselves into the surrounding environment through their “physical and visual stylization of the body.” But the act of mimicking one’s background also carries with it experiences of loss: a loss of individual identity, perhaps, but also of one’s culture, history or background. With no common wardrobe among the women, nor discernable facial features, Sandhu’s figures elicit a melancholy response. Who were these people when they stepped away from the frames that contained them?

In a year where nearly every interaction I’ve had with other human bodies has been mediated through a software program that unrelentingly puts our faces on display, or (quite literally) allows us to disappear into our virtual backdrops, Sandhu’s exhibition raised questions about the right to look and be looked at, and left me wondering about who has the right to fade into the background under the scrutiny of a stranger’s gaze. 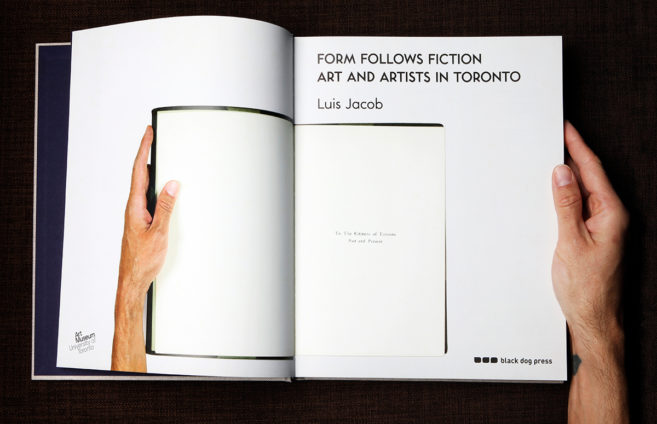 Roughing It in Toronto

In his new book on Toronto art, Luis Jacob examines how colonialism and its erasures—along with hidden ravines and tangled gardens—have had a defining influence on the city’s creative ecology