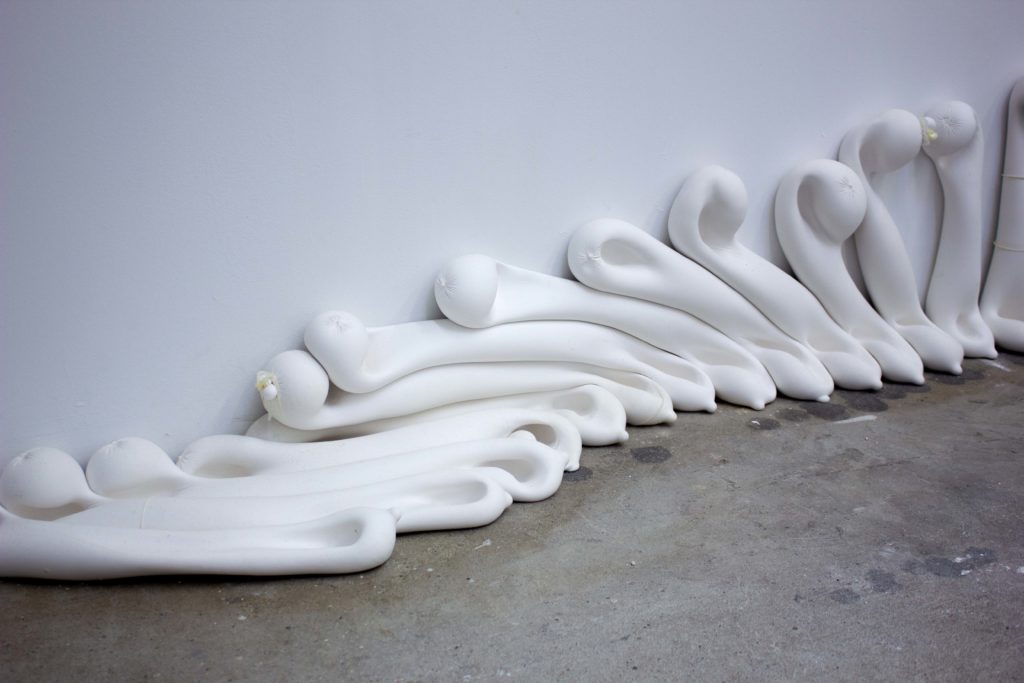 The weird plaster forms of Robert Anthony O’Halloran’s “Ursula’s Garden” splay up against the bottom edge of Sibling Gallery’s circumference, gumming up the gap between concrete floor and wall. Shredded latex shrapnel—leftovers from the artist’s process—gather in clumps or trails throughout the space. O’Halloran used condoms as encasing membranes to make his soft, fluid forms, using latex’s balloon-like stretch and razor-thin skin to manipulate gypsum cement. Though liquid in their appearance, the plaster “polyps” (meant to reference the creatures in The Little Mermaid villain’s garden of lost souls) are as hard and dry as a desiccated skeleton or unglazed fired clay. The forms stand in teams and undulate, dependent on each other like a wave at a sports game or a line of tumbling dominoes.

My first reactions were felt rather than articulated. I believed I could read the patterned forms as I would a line of music. I imagined the sounds they might make if—following from the title’s theme—Ursula ever granted them voices. They could be read physically too, like a choreographic score. I pictured moving my hand up and down in response as if mimicking a topsy-turvy airplane to a child or cutting the wind with my hand while driving down the highway.

Words could only tease out a single line of interpretation, just one shade of the slippery forms. They just look like so many things. As an exercise in articulation, I tried to describe a single polyp on the gallery’s south wall. Standing at attention (military and erectile references intended), it looks variously like a standing cobra about to strike, or maybe an out-of-place sperm. Its head looks like a breast or an eyeball, like an asshole or puckered lips. It looks like a balloon animal, an unfurling seedling, a gland or a pustule; like a tube sock with a tennis ball in it or pizza dough mid-knead. It looks like a submarine periscope, or like that moment in the music video for Busta Rhymes and Janet Jackson’s “What’s It Gonna Be?!” where Busta transforms into a slippery metallic worm and slithers happily through the stunning late-’90s CGI set. I could go on.

Multiplied by 222, the edition number of the individual plaster sculptures, the breadth of descriptors becomes dizzying. This polyvalence seems to be a result of O’Halloran’s hyper-physical process in making this work: rather than working backward from a predetermined end point, he experimented, played, repeated and, through a pairing of corporeal instinct and sheer manual labour, arrived at a final composition ripe with unspecific but limitless possible referents. We could read emotional arcs into the polyps, for example, their shapes reflecting a flurry of feelings from anger, sexual frustration, cuddly love and affection, to an exhausted collapse. Or, more crudely, maybe they depict a dick’s journey from flaccid to erect, to spewing, and back to droopy resignation. Whether interpreted as sentimental or crass, the forms are overflowing.

O’Halloran also works in partnership with the materials he employs, often deferring to the gypsum cement’s fickle temperament. Mixing in small batches to make the polyps, O’Halloran would fill a condom with the liquid plaster, spank the taut latex to burst air bubbles and quickly plunge it into a bucket of water to clean its surface. Then, sensing the plaster’s consistency and tricky kick-time by touch, he slammed, pushed or pulled the latex forms against the wall with the weight of his body, using his thumb and palm to stretch the form into position until set. Always responding to the latest cast, each polyp’s shape was determined by its neighbours. The result isn’t unlike the white caps of a wave: individual licks form a unified whole.

An accompanying sound piece trickles in and out of audibility in the gallery, capturing the squelching, spanking and snapping noises of the process. One is reminded of wet macaroni being stirred (or of something more illicit). The action O’Halloran enacted on the plaster captured a type of suspended agency—like a climactic release caught mid-gush. Castaways from early trials placed in the centre of the gallery’s floor and throughout the bathroom, hallway and exterior lack the rigour and movement of the final installation. More sedentary and, well, plop-like, they are victim to gravity’s weight rather than partner to O’Halloran’s pull.

The intensive choreography of hands and body was a punishing practice of endurance. When visiting the gallery for a walk-through with O’Halloran shortly after the opening, I asked how his body felt after more than two weeks of install. “Oh, it’s busted,” he told me. In admittedly another layer of punishment, I asked O’Halloran to demonstrate his position while setting the forms. Immediately I could see why his body would be “busted” after 222 counts. Crouched on all fours with his forearms on the concrete floor, he slotted his right thumb and left palm into either end of one polyp, demonstrating the position he had to hold for, in some cases, close to five minutes before the plaster set.

It was a lock-in-key fit, his body to the plaster. That moment of seeing his hands press into the now-solid form was a type of revelation for me. It foregrounded the body-to-body (and body-to-material) relationship at the centre of the work. This corporeal mode of communication sidestepped that tricky distance language introduces, avoiding clumsy reliance on external reference material like didactics or overly prescriptive artist statements. And there’s a generosity to that. By allowing for ambiguity of form in the weird growths of “Ursula’s Garden,” O’Halloran makes space for each viewer to flex their own perversions, luring more bodies into the fold. 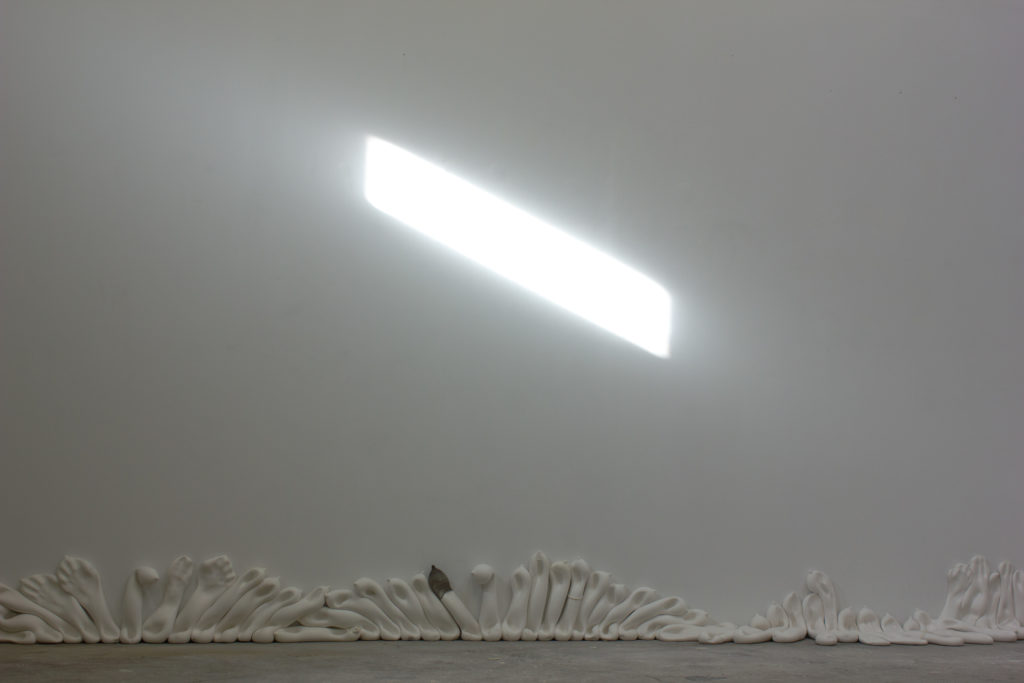 Emma Sharpe writes and edits between Montreal and Toronto. She holds a BFA from NSCAD University and an MA in communication and culture from Ryerson and York Universities. Sharpe was Canadian Art’s 2019–20 Winter Editorial Resident.