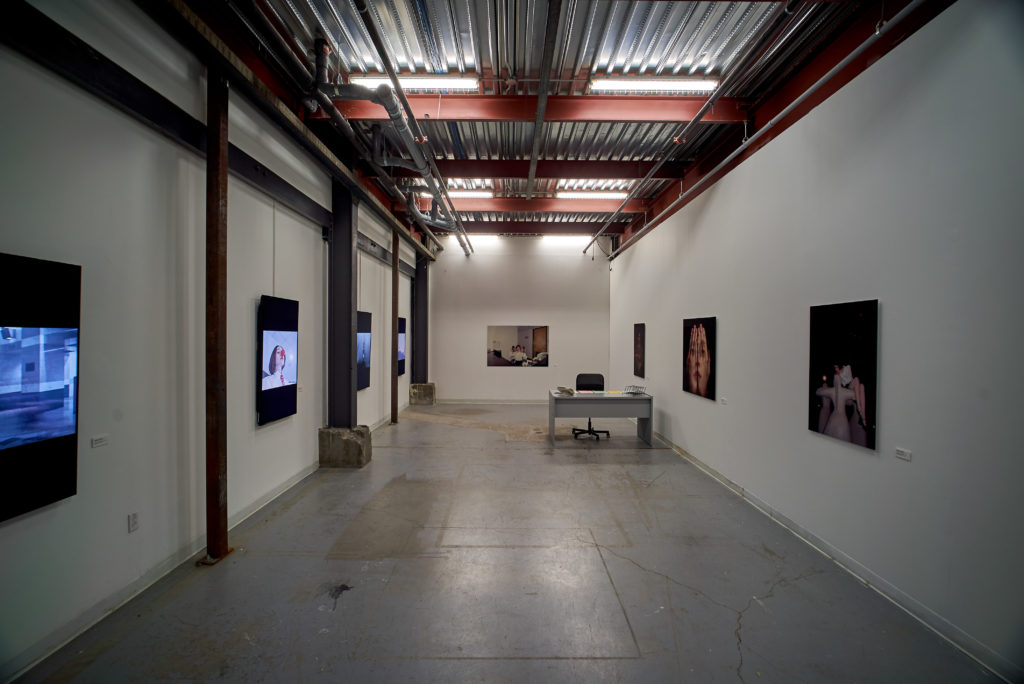 A dinky grey desk stood on one end of a small room off to the side of the main exhibition space at Arsenal Contemporary Art Montreal. A telephone and some photocopied documents, stacked neatly in colour-coordinated piles of uniformly nauseating pastels, sat on top. The chair behind this desk was swivelled ajar as if its occupant would be back in just a moment. This drab set-up was the first thing you saw before you noticed the artwork on the walls and the plaque by the doorway that told you this room isn’t a poorly located office but part of the gallery’s recent group exhibition “Multiple Views on the Collection,” and that on view here was a collection of works from Amalia Ulman’s durational performance Privilege, in which the artist occupied a downtown Los Angeles office from 2015 to 2016. Dramatizing corporate office culture, Ulman observed a dress code of grey, black, white and red, adopted a pet pigeon named Bob and produced a series of works modelled after New Yorker cartoons, the Economist’s colour palette, memes, Vines and other such pillars of corporate aesthetics and dayjob time-killers.

In the 14-second video Privilege 9/30/16 (2016), the artist glides across the office building’s marbled lobby in a wheeled desk chair, not unlike the one in this gallery. Tchaikovsky’s Swan Lake plays on a loop as Ulman wheels back and forth, kicking her legs up and twirling across the lobby floor. Ta-da. Ta-da. Ta-da. Ta-da. Ulman here looks at once like a kid playing make-believe and an advertisement for the moment of making it. If Ulman’s prior performance Excellences & Perfections (2014) involved adopting tropes of Young-Girldom, as Fiona Duncan has pointed out, the office situation in Privilege includes all the right icons of adulthood, but the Eloise-like attitude with which Ulman inhabits this seemingly vacant building suggests that this performance of office work, in its uniformity, repetition and banality, still recalls the mimesis of images, gestures and props from which the Young Girl takes her cue. The prop in this video is the rolling desk chair. The rolling desk chair, I’m sure, was designed for function. One wheels around importantly because there’s no time to stand (money never sleeps, etc.), but I’ve never met an office chair I didn’t want to spin in. Equal parts fun and function, the desk chair is a mascot for the cult of work hard, play hard. It’s also a status symbol, if manufactured by Herman Miller.

Status is a constant preoccupation in Ulman’s work. Status is also a measure by which her work is often evaluated—either to reify or undermine it. One work in Privilege not included in the gallery’s collection is an as-if video commercial that features Bob as the face of a Chanel fragrance. In another, the Gucci logo flashes in the centre of the screen as Ulman kicks around a red ball in designer tights and Mary Janes. Some of these corporate-looking ad campaigns are parodies and some genuine, paid for by sponsors, but this distinction is never transparent. I know that Privilege is an art performance and that it’s a critique of corporate capitalism, but it also has corporate sponsors. Typically, artist and spectator get to be in on something together. But what does it mean if a brand can buy in too? What’s the difference between reproduction and critique? If we understand advertisements to be strictly aspirational (rather than humorous, self-reflexive or referential), then here is a story about a working girl killing time in Gucci. In real life, the girl who wears Gucci to work presumably has a job that affords her Gucci. But advertisements, if aspirational, reverse this principle. They’re scriptures for the gospel of dressing for the job you want, not the one you have: you buy the clothes so that you can have a job like that. You gotta spend money to make money, and make money to spend money, which you gotta do to make money to spend money to make money to spend.

The marbled lobby of Ulman’s chair twirl recalls a simpler time—a retro fantasy of office culture composed of billowing Armani, wet lunches, deco interiors and stone facades, all viewed through the film grain on the other side of movies like Wall Street.

I guess I’m trying to say that if you can fluidly morph between the worlds of art and commerce indistinguishably, then, well, is there a difference? Flattening distinctions between subject/object, insider/outsider and producer/consumer, Ulman’s performance practice asks us to consider the power of a critique from inside the frame. Objectification, and who’s doing it, is central to this question. Consumer capitalism and art-world spectatorship encourage a structure for the formation of self-identity that relies on your relation to objects (and your perception of the Other as object), be it a commodity or an artwork. The consumer and the voyeur are subjects here—they (unlike the fetishized object) are marked by their desire, and may indulge in, grapple with or take accountability for their appetites as they so chose. Everyone knows that privilege is a two-sided coin, that it’s also a responsibility.

In her flirtations with objecthood, Ulman complicates these distinctions, as well as their attendant responsibilities. If you’re not a subject, you don’t have to be accountable. Objectification is transcendental. “I was now flat, a mere image,” Ulman says in the video short Sordid Scandal (2020), describing a conversation with a piano player outside a party. “I realized something magical was happening: I was being objectified.” Sordid Scandal premiered online while I was writing this article. “I’m now eternal,” Ulman narrates. “As an image, I will never be wrong or right. I will never die.” As an accompanying work for Ulman’s upcoming feature film El Planeta, Sordid Scandal takes the form of a didactic video essay, in which Ulman offers interweaving stories about the film’s creation, her ambivalence toward her art practice and her fraught relationship with her father in voice-over narration.

Privilege 4/29/2016 (2016), one video work on display at Arsenal Contemporary Art Montreal, is a GIF-style self-portrait of the artist in a white shirt, red tie and clown nose poised to the sky. Behind her, a wall clock is given an animated twinkle like the ones on the teeth of grinning cartoons. As cheeky as it is, this portrait is perhaps the most revealing of Ulman’s otherwise enigmatic art practice. Ulman represents herself here as the Jungian trickster, an archetype whose ability to bend the rules others tend to take for granted usually helps reveal something about the rest of us. We tend to use “actor” in its Hollywood, rather than legal, sense of the word. “Performer” means theatre, not someone doing a task. The appearance of doing something doesn’t detract from the fact of doing it. Nonetheless, we’re suspicious. When Excellences & Perfections was revealed to be an art project, some thought Ulman a con artist instead of a performance artist. “Most articles about Excellences & Perfections contain the word ‘hoax’ in their headlines…. On paper, I was a millionaire and a world-renowned scammer,” Ulman says in Sordid Scandal. Her father, an actual con man, pointed to such headlines in court to frame his daughter for his crimes. “That’s the thing with con men, though, you often have to credit them for being, at least, smart,” Ulman says. Indeed, the fake-it-till-you-make-it strategy of fashion advertisements and clichéd career advice can also be said for conning and performance art. The difference between cons and art, though, is that the con man is taking something from you, typically your money. And isn’t the artist innocent of, at least, that?

Sordid Scandal was released on the Tate Modern website to some criticism about the artist’s choice of venue. Protests of the Tate Enterprises, which provides services to four museums, have been ongoing over the past months since the museum announced it would lay off 313 employees because of the pandemic. The workers deemed obsolete are the employees of museum shops, cafes and restaurants, which make up almost half of Tate’s employees, and are already among the art institution’s lowest-paid staff. If Privilege parodies bureaucracies, and corporate finance at large, Ulman’s partnership with an institution that has just made brutally clear its deference to such corporate hierarchies, at the very least reinforces the very questions her work already raises: What’s the difference between reproduction and critique?

Today’s office may well be undergoing a revolution, as work, for many, now takes place from home. Privilege may have at once been an exaggerated performance of normalcy, although it now feels like a surreal relic from history. The marbled lobby of Ulman’s chair twirl recalls a simpler time—a retro fantasy of office culture composed of billowing Armani, wet lunches, deco interiors and stone facades, all viewed through the film grain on the other side of movies like Wall Street. LA’s downtown, where Ulman’s Privilege performance takes place, was modelled after the financial districts of cities like New York, and serves as location for movie and commercial sets more successfully than as a corporate centre. These buildings are also a performance. Already something of a ghost town, the entire district closes every Sunday for commercial shoots.

Even in the movies, finance is about corruption. Work isn’t the same as labour. Social exchanges are mistaken as economic exchanges, and vice versa, such is Marx’s classic critique. Money talks, they say, so our figures of speech are euphemisms for economics: “Was it all worth it?” Petitioning in solidarity with the striking Tate workers, artist Jesse Darling made a statement published on the union’s Instagram: “In the art world we talk about ‘the work’…But rarely do we talk about the workers. Somehow the art world has successfully erased most of the labour that goes into ‘the work.’” In the art world, as in the finance world, objects are revered as inherently valuable. Meanwhile, we overlook the labour behind them, and therefore, the value of real people. Echoes of this critique of commodity fetishism ring through both Ulman’s performance art and its receptions as either celebrated fine art or public prank. But strangely, this critique also functions as a tool. The best hiding spots are always in plain sight. Behind her permanence as an image, the artist’s labour remains invisible. As an artist, Ulman might be asked to be accountable for such decisions like her partnership with the Tate Modern. But as an image, she’s protected. “As an image, I will never be wrong or right,” Ulman says in Sordid Scandal when she realizes, relieved, that she’s being objectified, “I will never die.”

Chelsea Rozansky is a writer from Toronto. She was Canadian Art's summer 2020 editorial resident. Rozansky is currently underway on an ongoing writing residency at C Magazine, where she is engaged in an archival research project questioning notability, collective authorship and the labour rendered anonymous in the production of artistic discourse.