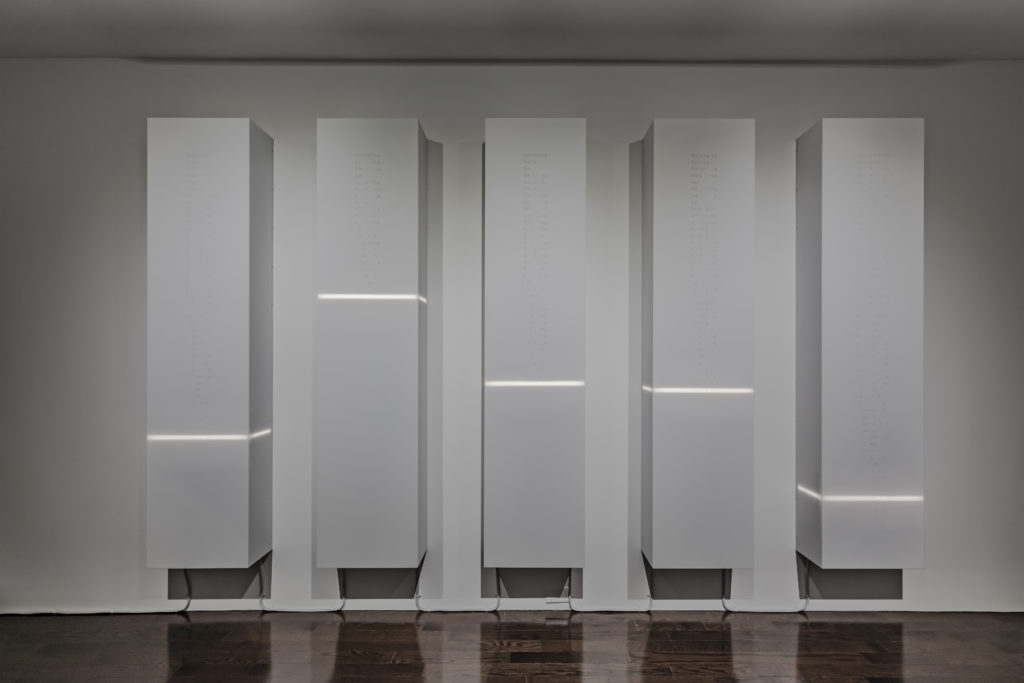 Rising from the centre of Toronto’s bustling financial district is the country’s highest office tower—a monument to progress and prosperity. With thousands of people and many more dollars passing through its walls each day, it is a welcomed surprise that amid the upper-floor executive offices visitors encounter an artwork that encourages them to break from these modern pressures, if only for a minute and 30 seconds.

Lois Andison’s sculptural and kinetic installation, tree of life, curated by Dawn Cain for the BMO Project Room, is a meditation on life and language. In a darkened space, five tall white rectangular boxes float on the wall—modest counterparts to the marble-clad columns in the building’s lobby. A word that traces the stages of a human life is lit up near the top of each unit: beginning, becoming, believing, belonging, bequeathing. Glowing bands of light illuminate the words from behind. In unison, they cascade slowly downward, revealing one at a time smaller words broken off from the headings preceding them. The tranquil cadence of the work is disrupted as each light reaches its final destination, stalling until the remainder of the sequence plays out, and the entire installation holds on “I.” The pace of the work, through the movement of illuminated words, divides it into distinct stages. Rather than determining any ultimate resolution, this piece, like many of Andison’s text-based sculptures, focuses on the de- and re-generation inherent to the human condition.

tree of life bears a resemblance to the medieval narrative of the Danse Macabre, exemplified in elaborate 15th-century illustrations in which death leads characters from various stages and stations of life by the hand. While Andison’s minimalist and linguistic version differs aesthetically from Danse Macabre—each of her panels is produced as a site of reflection in which to see oneself—they are both effectively storyboards of perpetual movement. Installed in places of high esteem in their respective times—previously the church, and now a bank tower—both formats acknowledge death as the great equalizer and reinforce that no one is exempt from its cycle.

The interstitial words in tree of life teeter between semiotic significance and arbitrary coincidence. Andison uses language to deconstruct meaning: by isolating words she reveals their powerful potential as well as their limits. The wordplays read as snapshot moments in a life lived—at times generative and meaningful, at others entirely banal. In only 90 seconds, a life flashes before our eyes—a sobering and serene memento mori in a busy high-rise. At the epicentre of a hub of productivity, within a world where the human capacity to advance, build and profit is constantly being pushed, Andison has carved out a space to strip life down to the natural and inevitable plotline we all share. 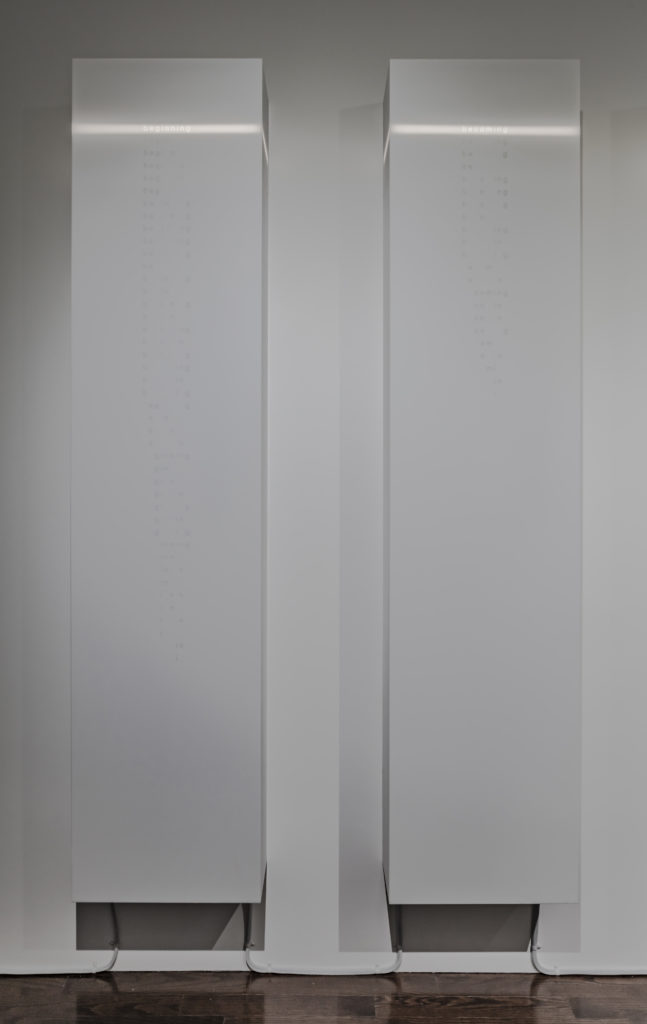