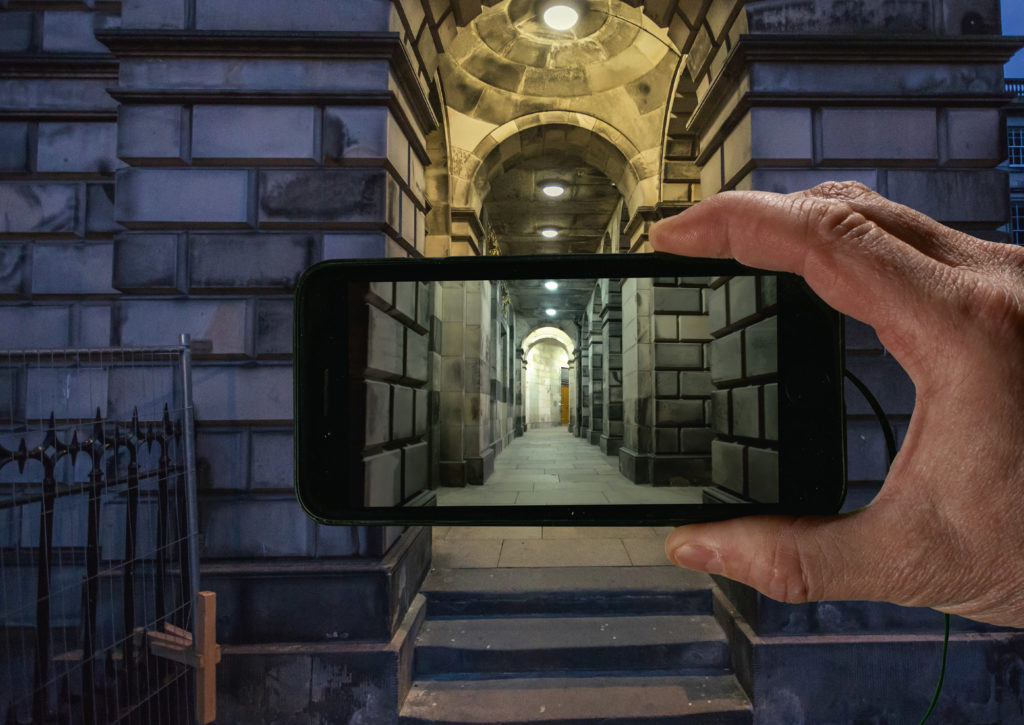 On a warm summer evening recently in Edinburgh, I collected a smartphone and a pair of headphones and was directed toward a chalked “X” to press play on Janet Cardiff and Georges Bures Miller’s newly commissioned Night Walk for Edinburgh. Lasting 54 minutes, the walk encompasses about one kilometre of the city’s downtown core, as guided by the Cardiff-voiced audio in my headphones and Miller-shot video on the smartphone screen.

The walk begins with Cardiff slowly describing the surrounding area, acclimating viewers to how to listen and move through the city “with” her. As with previous walk works by Cardiff and Miller, the use of binaural audio and augmented-reality-style video creates an immersive experience that makes it difficult to separate from the parallel experience of walking. Although Cardiff and Miller’s walk took place during a dark, wet night, and mine during a bright, dry evening, I caught myself being mindful of slippery steps and shady passageways, feeling unsure of what this journey entailed.

Early in the walk, Cardiff draws attention to quotidian things: oddities in windows, architectural details and city sounds. As the walk progresses, the everyday becomes eerie. Pausing at the bottom of a set of stairs in a narrow corridor, the smartphone video observes tourists noisily dragging wheeled bags downward, followed by a baby carriage that overturns and spills a baby (doll) out onto the steps. As the voiceover guides walkers past this scene, Cardiff asserts she “didn’t know what they expected her to do” and that it must be part of the “game”—without explanation of who “they” or the “game” are. Later, Cardiff directs walkers to stop alongside a pub and watch a recorded conversation between two men. One man is empathizing with the intention of the other to murder his brother. 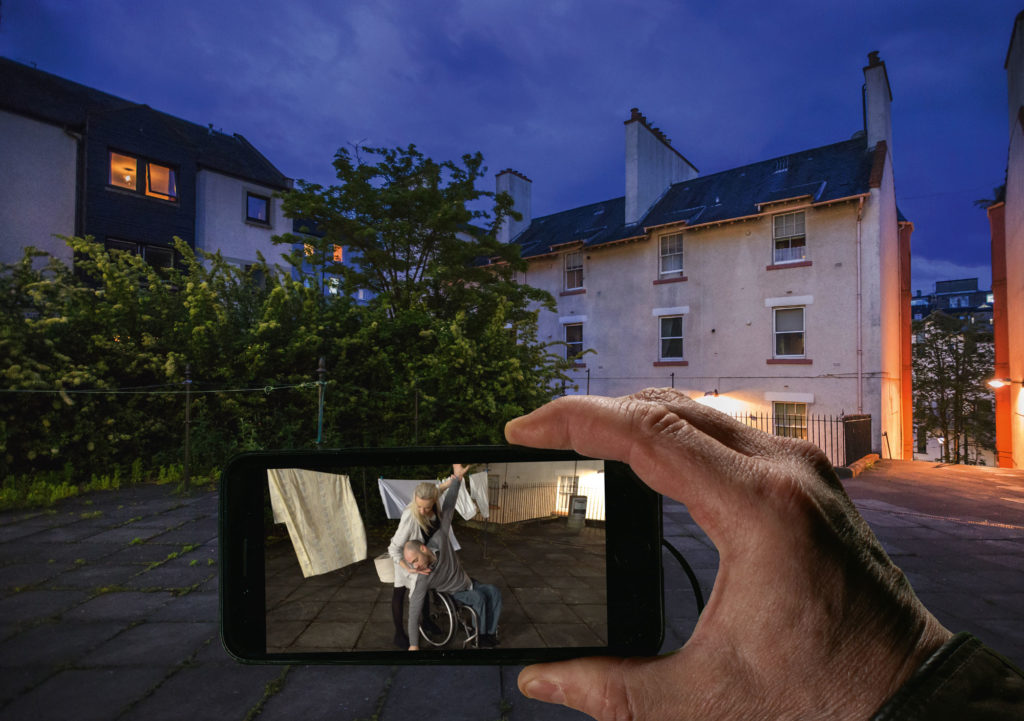 Contrasts between my time and space and the narrator’s exacerbates a sense of strangeness or discombobulation for me. As I exit onto Edinburgh’s Royal Mile, Cardiff’s street is empty, but I struggle to dodge tourists. Yet the tour itself is another paradigm referenced: Cardiff guides us to monuments such as a statue of Alexander and Bucephalus, which conveys the taming of the war horse that feared its own shadow. A judicial monument, where the ears of petty criminals were nailed to a door, is similarly pointed out.

Collapsing the space between fact and fiction, and between narrator and participant, Cardiff voices a fear of walking alone and a sense of comfort that my company provides her. This sense of ease quickly dissolves when she is menacingly approached by a gang of soccer chums-cum-ghouls, and the video switches to CCTV-like police footage of a crime scene under investigation.

Eventually the more conventional video format returns, and Cardiff guides walkers through small courtyards and passageways. Along the way, she calmly states that elements from her dreams have been entering her videoed reality while a woman’s shoe, pantyhose and blood-red sauce appear strewn across uneven pavement. Expanding on this discombobulated out-of-body experience, Cardiff begins to notice and follow a woman who resembles her, and who wears the same red jacket Cardiff lost in Berlin. The other woman becomes an additional spectre, or apparition-like guide, during my walk.

Throughout Night Walk for Edinburgh, any attempts to construct coherent narratives are consistently undermined. Frustration and connection intertwine. Returning the devices and reflecting on the work, I found myself unable to distinguish between my walk and Cardiff’s. I felt I was under a kind of temporary hypnotism, one that underscored the illusion of truth. This much was emphasized by the final piece of paper Cardiff (and I guess I, too) found on the walk, which stated, with confounding clarity, “This is the present.”

Yasmin Nurming-Por is a curator and writer currently based in Toronto.