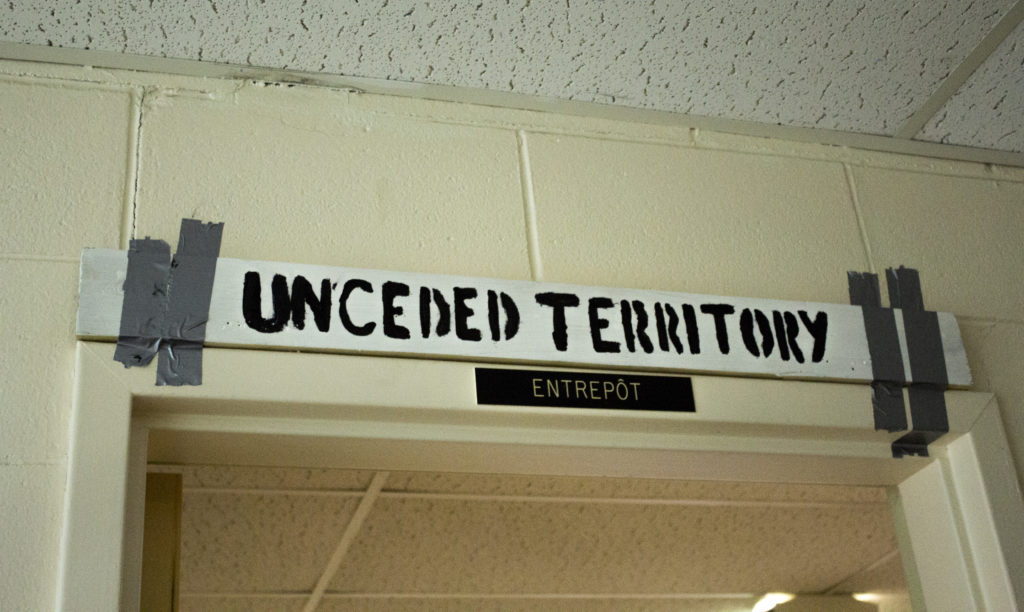 Planted into the ground outside the former St-Louis-de-Gonzague elementary school in Sudbury, site of the sixth edition of FAAS (Fair of Alternative Art), was an unassuming hand-painted wood sign with the words “UNCEDED TERRITORY” in black text on a white background. It was the first of many similar signs posted throughout the three floors of the fair by the Debajehmujig Storytellers, a multidisciplinary theatre collective based in Anishinaabek Manitowaning. These text works reminded visitors and resident artists of the need to reflect on the relationship between artistic performance, territories and identity, and locating and creating on the unceded territory of the Anishinaabek Robinson Huron Treaty. Directing viewers in multiple directions throughout the floors of the space, the signs created a sense of disorientation, or perhaps reorientation. This seemingly simple action had a power that challenged artists, visitors and guests to reconsider how they can unsettle themselves across Turtle Island, a provocation that continued to resonate for me throughout the fair.

It’s important to note that FAAS is not curated by one person, but instead focused on collective knowledge and community building. For this edition of the biennial event, Galerie du Nouvel-Ontario (GNO) partnered with 17 other artist-run centres from across Canada to invite more than 30 national artists, also expanding the fair to feature a selection of international artists. Each artist-run centre selected an artist or collective to reflect on the theme “À qui? (To whom?),” then produce and install new work on-site during the fair. The result was a public space of ongoing conversation, camaraderie and intense creativity. According to the invitational card, “Artists and thinkers will reflect on the intersection between territory— collective, political, desired or intimate—and identity.” The fact that GNO uses the word “fair” rather than “festival” also suggests a place of unpredictability, playfulness and surprise, an element that unfolded in a finale of performances on Saturday evening.

Moncton artists Mathieu Boucher Côté and Marika Drolet-Ferguson traced the emotive relationships between local maps and viewers in their research project Cartographie sensible (2018). Participants mapped the relationship between Sudbury and their feelings of happiness, sadness and fear to create memory maps and alternative geographies of place. St-Louis-de-Zig-Zag (2018), by Sturgeon Falls artist Anyse Ducharme, presented listeners with aural impressions of the elementary school through a series of small contact microphones placed throughout the building. From the basement boiler room and up the three levels of stairs, the work reverberated with the live sounds of visitors moving through the space, invoking both present action and ghosts of the past. In an untitled collective performance, the Debajehmujig Storykeepers invited visitors to sip cedar tea while being treated to a relaxed and saged space of conversation and Odawa teachings. Calgary artist Terrance Houle’s performance Song for Fallen Mountain (2018) (part of his ongoing Ghost Days series) formed a transformational prayer in a small space, between grey rock of a fallen mountain and earth. Bringing in the sounds of coyotes yipping, an owl, the static resonance of the old building and the energy of viewers, the performance placed Houle, a Blackfoot artist, within a prayer formation offered up to honour Indigenous nations and all nations on the earth. The evening closed with an untitled performance by John Deneuve, a Marseille-based artist, in an explosive movement of sound and surge of energy, elevating visitors on unceded territory.