Before I Was a Critic I Was a Human Being 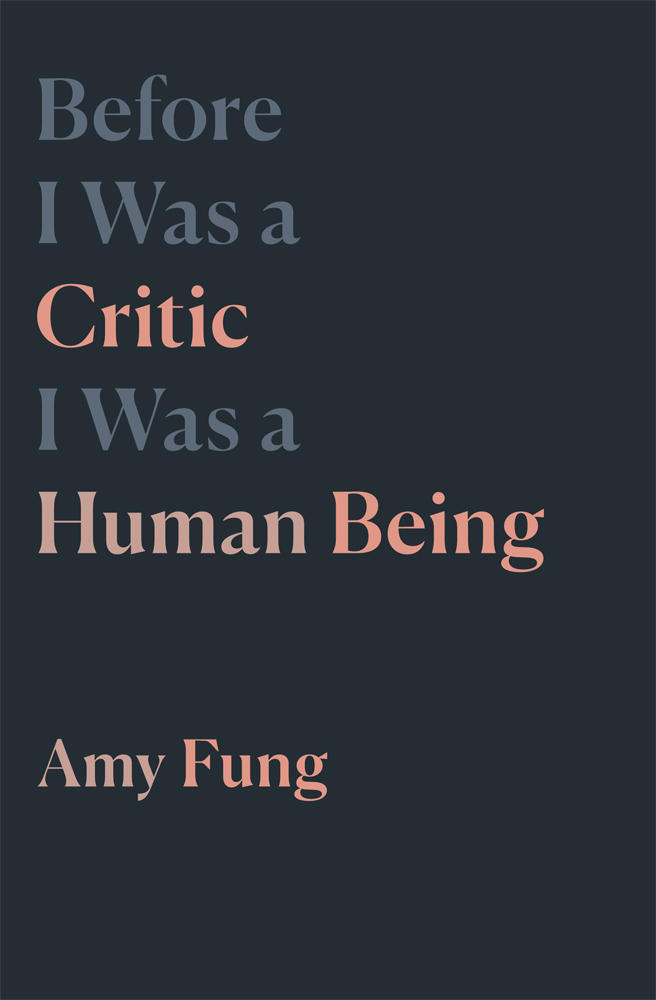 Anxiety about change and desire for preservation are central concerns in current discussions about art criticism and contemporary art. Amy Fung’s debut book presents a snapshot of current affairs in Canada—in politics and the arts—that reminds readers that change is long overdue. Before I Was a Critic I Was a Human Being is not interested in engaging in the panic-driven and often highly theoretical conversations about how to engage with art; Fung’s writing, with the exception of a couple chapters and select passages, is adamantly not about art criticism. Rather, it points to the framework in which criticism continues to exist in this country, to the idea that “the Canadian experience cannot be removed from the Canadian imaginary, which, as a byproduct of culture being produced in this country, continues to serve and protect a white masculine settler-colonial hegemony.”

The book’s title serves as a prompt and literal starting point for a sobering and critical look at the social and political landscape of Canada, interwoven with Fung’s own experiences as an immigrant and POC, as well as a larger discussion about the “betrayal of [the] relationships [that were] built over generations of covenants and wampum belts” and the “failure of each successive Canadian government to uphold its end of treaty law.” While the book’s description calls it a very long land acknowledgement, Before I Was a Critic is also an open and personal apology from Fung for being “completely complicit” and, among other things, not “think[ing] twice about entering a space that could cover its walls with images of contemporary Indigenous perspectives, but exclude their physical bodies from entering and experiencing.” In doing so, Fung returns to the foundations of art criticism. She reminds readers that art criticism is a form of engagement rooted in the personal, which is inseparable from the political.

Before I Was a Critic emphasizes the importance of going further than just admitting one’s wrongdoing and ignorance. In fact, Fung puts forth two interlinked ideas in her book: first, that immigrants are not exempt from the colonial project, and that they have “a lot of listening and unlearning” to do, including asking, “How do we support Indigenous rights in this country without it being controlled and commodified by empire?”; and secondly, that it does not matter which generation of an immigrant you are, as that does not make you any less of a settler. Fung herself confesses that “it would take years for me to realize that the string of white men and women who proudly claimed their Canadian roots and values were also not from this country.”

In his 2002 book Publics and Counterpublics, Michael Warner writes: “Public discourse says not only ‘Let a public exist’ but ‘Let it have this character, speak this way, see the world this way.’” Speaking to all of us who call Canada home, Fung’s book calls for a re-evaluation of the very idea of a “Canadian public,” beginning with the fundamental problem in asking, “Whose public?” From a critical stance on parts of the art world, like in the chapters “Witness” and “Difficult People,” to an intimate look at the hostility toward Indigenous and POC populations, as in “Sprawl” and “Choke,” Fung stays true to her belief that “sound bites and hot takes [in art criticism] cannot hold all that remains invisible and present in the world.” Fung presents readers with a reality that can be hard to face and truths that need to be heard no matter how uncomfortable, because the failures of not only the government but also the Canadian public to respect Indigenous peoples and their cultures, to listen to their calls for help, their assertions of self-determination, and to respond to them with more than simply words of sympathy, “is a shame all Canadians should bear.”

Margaryta Golovchenko is a settler-immigrant, poet, critic and academic based in Tkaronto/Toronto, Treaty 13 and Williams Treaty Territory. She is currently completing her MA in art history at York University.