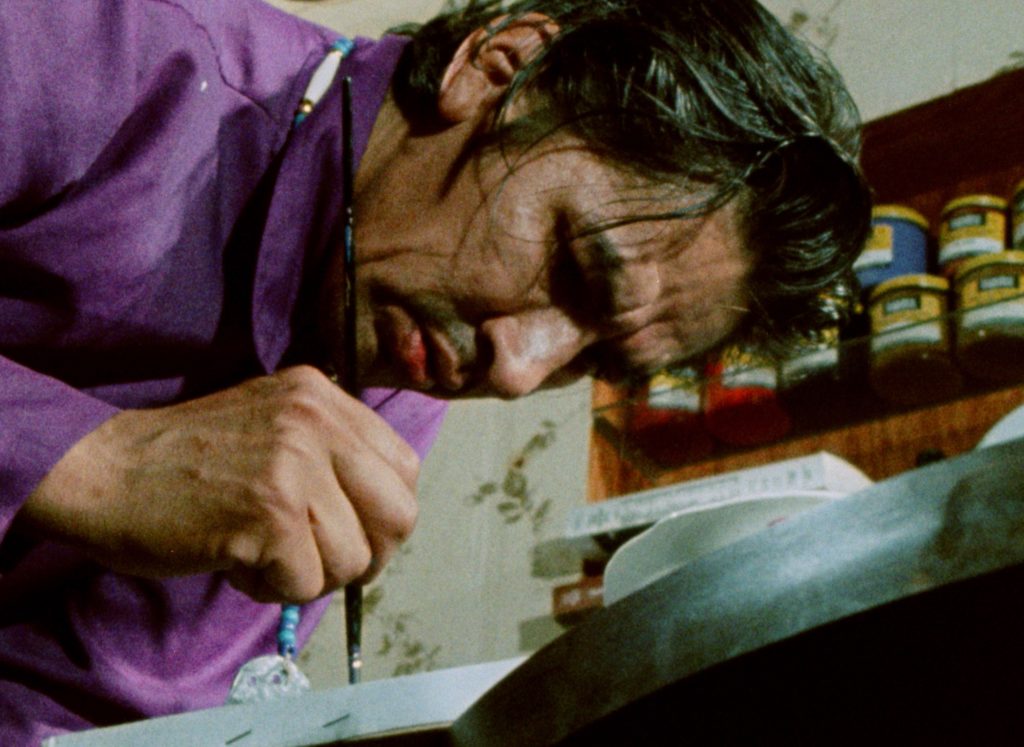 Norval Morrisseau working on a painting in the 1970s. Photo: Courtesy NFB.

Court decisions are not known, generally, for their narrative power or emotional resonance.

So even though an Ontario Superior Court judge admitted last year that there was evidence of a Thunder Bay–area fraud ring concerning the paintings of Norval Morrisseau, one of the best-known artists in Canada, that disturbing finding did not find wider awareness in Canadian art circles, or beyond.

“There is evidence of the existence of a forgery ring in Morrisseau’s hometown of Thunder Bay, headed by a local criminal,” Justice Edward M. Morgan wrote in May 24, 2018. He added: “I do not doubt [its] existence and the circulation of fraudulent paintings produced there.”

The judge’s admission of this forgery circle—and the very troubling evidence he heard—is, unfortunately, not very accessible. It’s buried in the middle of a complex, dryly worded 30-page decision. And that decision, while available online, is itself buried in the archives of the Ontario Superior Courts website.

But wider awareness about this shocking Norval Morrisseau forgery ring—and its tarnishing of a revered artist’s legacy—may soon be set to grow.

On Tuesday, April 29, the documentary film There Are No Fakes will have its world premiere at the Hot Docs festival in Toronto. Theatrical releases in Vancouver, Montreal, Sudbury and possibly other cities will come in June. And in the fall, the film will air on TVO and the Knowledge Network BC.

With dramatic force and evocative on-site witness footage, There Are No Fakes makes a strong case regarding the existence of a deeply exploitive, and often even violent, Morrisseau forgery ring in northern Ontario.

The film also gestures to immense financial takeaways: one of the art dealers in the film estimates that Morrisseau forgeries in Canada could have amounted to 3,000 paintings and $30 million in fraudulent sales in recent decades.

In parallel, and no less troublingly, There Are No Fakes also surfaces yet more evidence of how white people in particular have exploited Indigenous peoples both in and beyond the art world. It starts out with a tale of art fakes, and then shows how one particular forgery, among others, might be connected to real physical and criminally indicted harm to Indigenous peoples.

Then, there are places where these harms intertwine: in the film, a white art collector utters violent intent, a white auctioneer speaks a racist epithet and a white art dealer provides fake provenance for a purportedly Indigenous artwork he sold for $20,000. That’s just some of what unfurls.

“I felt, as Canadians, why should it rest solely on Indigenous people to expose the abuses of white people?” filmmaker Jamie Kastner tells Canadian Art. “That was part of my personal motivation [in making the film].”

McMaster is one of several Indigenous art experts interviewed in There Are No Fakes.

Though he hasn’t yet seen the film, McMaster tells Canadian Art that he hopes the documentary will bring more public awareness around Morrisseau’s genius, as well as those who exploited it.

“I believe [this] film on Norval Morrisseau is worthy for public viewing, as it’s been many years since the last one was made of one of our true legends,” McMaster tells Canadian Art via email. “That this documentary is about an important topic makes it even more urgent for us to understand not only a complex man, but a complex story [of] what happens when a significant person’s work is capitalized upon by the unscrupulous.”

McMaster notes that there are still many truths to untangle around Morrisseau’s life and art.

“I agree that his legacy has been disastrously affected,” says McMaster. “It’s as if we have to have to divide Morrisseau into Morrisseau 1.0 and 2.0. Morrisseau 1.0 is somewhat less controversial, as it covers a period roughly the late 1950s to the mid-1980s. Morrisseau 2.0 is post-1985, when it becomes less clear of the kinds of works he created vs. what others have said he created.”

McMaster was a curator at the Art Gallery of Ontario when it came to light that a painting on display there, from the collection of Barenaked Ladies musician Kevin Hearn, may have been a fake. In 2010, Hearn, as owner of the disputed painting, was asked to remove the canvas from display at the AGO immediately. He later brought Ontario Superior Court action against Maslak McLeod Gallery, which had sold him the painting for $20,000 in 2005.

Filmmaker Calls for Action From Art World and Police

Musician Kevin Hearn’s experience with his disputed Morrisseau canvas is where filmmaker and journalist Jaime Kastner entered the picture. Kastner and Hearn had gone to high school together.

“I was not aware, really, at the outset, of the extent to which this film would become about the exploitation of Indigenous people,” Kastner tells Canadian Art. “This is an investigative film, and that is where the investigation, quite surprisingly, led me.”

As the exploitation around Morrisseau forgeries became clearer, Mark Anthony Jacobson, an artist of Ojibway and Swedish descent, joined the film’s team as an executive producer.

Kastner presented the film in advance to two people in the documentary who have been put at most risk of harm by the forgery ring’s leader. He also did a small private screening for some Indigenous artists and curators.

“My job here was to expose certain truths, I suppose you could say, and hopefully inspire the audiences to act on this information now that it has been put before them,” says Kastner.

He believes there are a wide array of actions that could be taken, including action in the art world around ethics.

“A police investigation is one thing that it would be nice to see,” Kastner says. “I guess the implication of the film is since we are revealing this large-scale kind of cultural abuse, that people in these worlds seek to correct it.”

Musician and art collector Kevin Hearn has launched an appeal regarding last year’s court decision. Even though that decision found that while a forgery ring existed, it could not definitively link his painting to that forgery ring.

Justice Edward M. Morgan, in his 2018 trial decision, cited a previous court decision which discounted art dealer Donald Robinson’s callout of a fake; the document indicates discounting was due to Robinson’s fiduciary interest in becoming the sole reputable dealer of Morrisseau’s work. But interestingly, Morgan, and at least one other judge, did not discount the late art dealer Joseph McLeod’s authentication of an alleged Morrisseau fake in a previous court decision; this is despite McLeod’s own vested fiduciary interests in having the ability to sell Morrisseaus, and being regarded as a Morrisseau expert. Perhaps an appeal could bring some clarity to this and other details.

Filmmaker Jamie Kastner is currently exploring the possibility of screening There Are No Fakes at galleries as well as cinemas, alongside panel discussions.

His research into instances of fake provenance and other shady art-world dealings have affected his view of the art world in general.

“If I were to start collecting art now, it would be very cautiously,” Kastner says. “Though perhaps because I know more about the risk, I could make a more informed decision about it than wandering in cold off the street.”

According to curator Gerald McMaster, no matter how many people see the new film, there is still much to be done to correct views of Morrisseau’s legacy.

“What concerns me is that the true picture of Morrisseau’s genius has been muddied from about the mid-1980s to the present,” McMaster states. “It’ll take a great deal of work on the part of scholars/experts to correct this aspect of his artistic output, so that we can have a better sense of that genius and not just the stories of what’s fake or not.”

Art dealing in Canada may become more transparent, some people hope, in the wake of a groundbreaking court decision issued this week 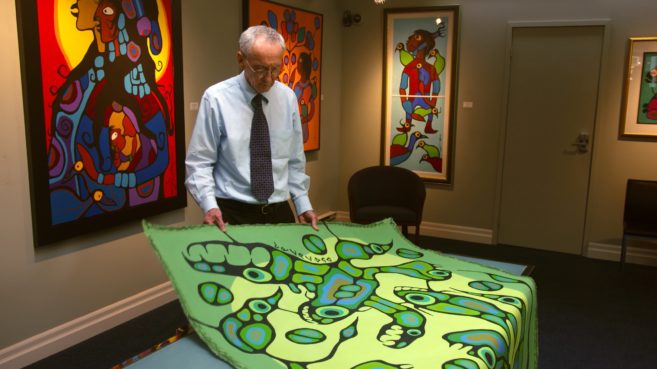