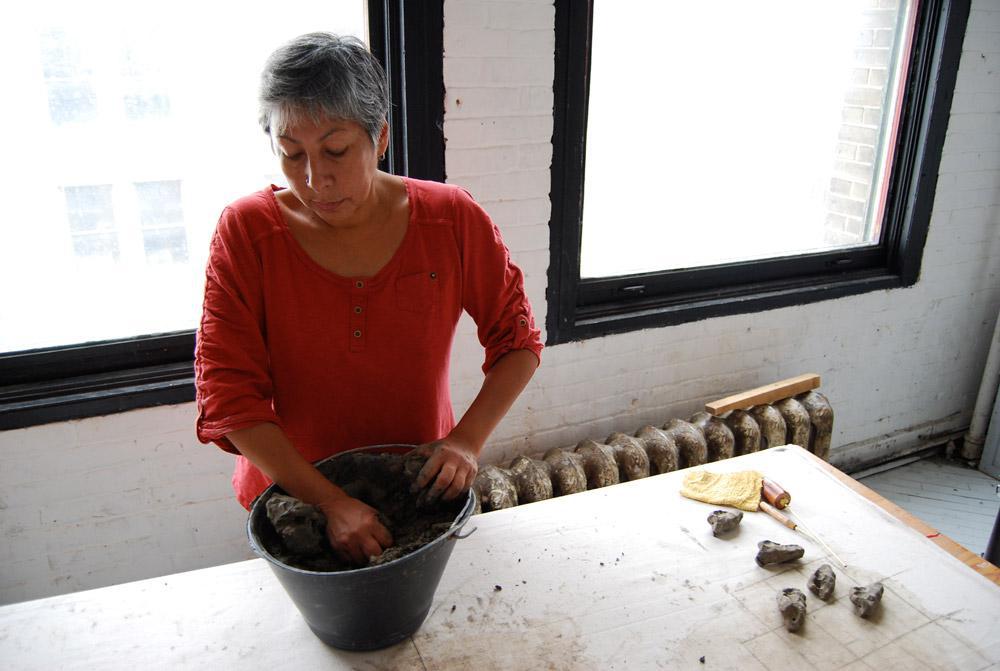 Rebecca Belmore working with clay dug up from the Red River Valley to create “beads” for her massive installation coming to Winnipeg's CMHR.

Anishinabe artist Rebecca Belmore doesn’t shy away from big projects. For her 1991 work Ayum-ee-aawach Oomama-mowan: Speaking to Their Mother, she created a massive wooden megaphone that she then installed in various locations across Canada, inviting members of the public to voice concerns to the land directly. In 2006, for Toronto’s first Nuit Blanche, she and Osvaldo Yero created the sculpture freeze out of a huge block of ice to pay homage to Neil Stonechild and other First Nations people who were injured or killed when left out in the rural cold by police.

Still, a project announced today may be Belmore’s biggest yet. In a commission for the Canadian Museum of Human Rights in Winnipeg, Belmore hopes to create a gigantic “blanket” out of 10,000-plus clay beads that will be shaped in part by members of the public including schoolchildren and elders.

“The piece will probably be 30 feet tall and 20 feet wide,” Belmore tells Canadian Art, noting it will hang off a hooklike structure, and drape in a manner akin to a textile. “I’m a little scared at this point, because it’s a lot of work…. You have an idea, and then you have to follow it through.”

The project is curated by Lee-Ann Martin. Located in the museum’s Indigenous Perspectives gallery, it will be revealed when the museum opens to the public in September 2014.

Interestingly, it is the excavation process for the museum itself which inspired the work. During that process, 400,000 First Nations artifacts were recovered from the building-site lands, as well as evidence of some 200 fire pits. The museum, like much of Winnipeg, is also located on very clayey soils called Red River Valley clay gumbo.

“This idea of clay and fire obviously leads to ceramics,” Belmore says, noting that ceramic pottery shards were also among the artifacts recovered on the CMHR site. This led to the idea of “making beads, and asking the community here to make beads.” The entire project is using natural clay dug up from underneath Winnipeg streets and sidewalks by a construction company that is in the process of laying sewer pipes.

Another aspect of the site that Belmore wanted to respond to was its status as a meeting place for hundreds, if not thousands, of years. (Belmore herself moved to Winnipeg recently following many years of being based in Vancouver.)

“There’s two great rivers here,” Belmore says. “It was an amazing site to gather long before Winnipeg existed.” She hopes that inviting others to shape the beads will assist in somehow “acknowledging the long history of people using this place—long before treaties and long before our contemporary life.” The act of creating the beads will involve “the act of pressing this clay, this land, and at the same time thinking about the future. The people who help create this blanket or sculpture will leave their trace for those [yet to come].”

People who want to participate in the project by shaping some beads can visit Neechi Commons, a community co-op, in February and March. That is where Belmore will have a studio set up and be inviting people to shape beads on a drop-in basis. The artist will also hold more formal bead-shaping workshops throughout the city as well, with details to be announced.

In terms of other, wider community responses to the museum, it is worth noting that the CMHR’s history has not been without controversy. In July, APTN reported that Manitoba’s Southern Chiefs Organization slammed the museum for “refusing to use the term ‘genocide’ in the title of an exhibit on Canada’s policies toward Indigenous people over the past century.”

Belmore’s use of the blanket motif in past works has also integrated a critical awareness of injustices done to First Nations people—from the distribution of smallpox-infected blankets to North America’s Indigenous peoples in the 18th century to the colonial legacy of items like the Hudson’s Bay Company blanket.

With this particular “blanket” at the CMHR, Belmore says, she hopes to capture and speak to a variety of complex phenomena.

“What I’m hoping is that the work I’m making will somehow make sense further down the road. I’m hoping it will stand the test of time and somehow acknowledge the land the museum sits upon and the city itself…. I think it’s really about some kind of acknowledgement of each other, and an acknowledgement that all of us have to live someplace, and that that is complicated in the world we live in today.”