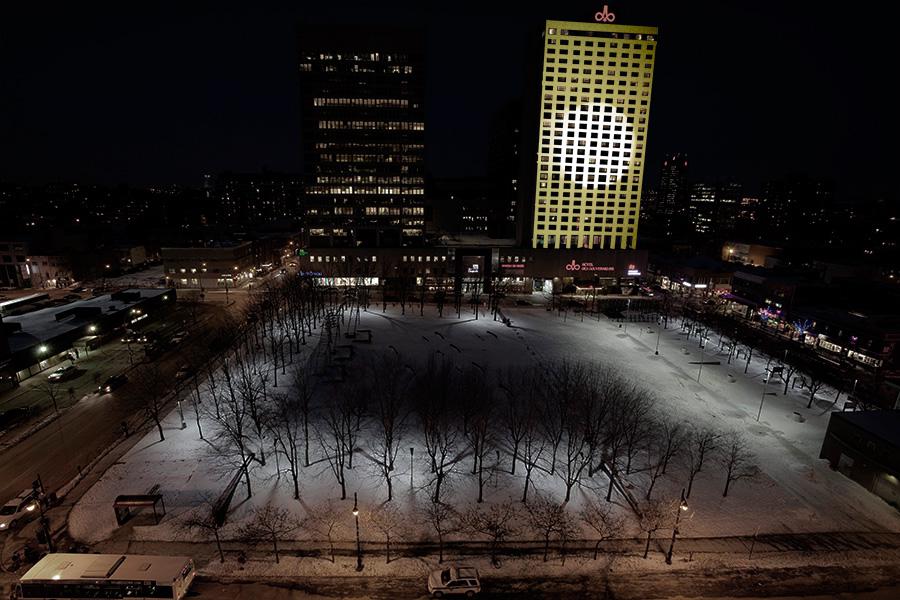 “To me, every night is different.” So begins an elemental journey in Pascal Grandmaison’s Le jour des 8 soleils, a monumental film and audio work currently on view at eight locations in and around the Quartier des Spectacles district in downtown Montreal. Commissioned for the city’s Luminothérapie festival, the work consists of eight looped, five-minute large-scale film projections plus a soundtrack (composed by Antoine Bédard) with stream-of-consciousness narration (written by artist Serge Murphy). The soundtrack and a related iPhone app can be downloaded from Grandmaison’s website. It all adds up to an abstract study of, as Grandmaison puts it, the “origin of light from the sun to the earth.”

As a multi-venue, multi-platform work, Le jour des 8 soleils is designed to evoke different engagements and meanings for each viewer, whether the work is a destination or an encounter by chance. The audio guide offers Murphy’s recounting (read by Pierre Lapointe) of the nocturnal observations and abstract revelations of a character drawn from street to street and site to site in pursuit of a ball of light. As he moves through the city—from Place Émilie-Gamelin to the Pavillon Président-Kennedy—different memories and emotive connections surface in the sounds and sights of a coursing urban infrastructure at night. Bédard carries this narrative along in the ebb and flow of a dreamily abstract soundscape joined here and there by the whispering prompts of our narrator. So deftly orchestrated is this pairing of story and sound that the overall effect is close to subliminal.

Grandmaison’s films, projected on various buildings, visualize this floating world. Each spreads across the nighttime facades of large structures via a synchronized assembly of 30 high-definition projectors. The movement of tightly framed representational images—an eye, a hand, branches of a tree or the forest floor—segue into a biomorphic geometry of shapes and forms that meld, pulse and resolve in an abstract play of light. That elusive ball of light hovers and shifts, moving in and out of the narrative flow. Even as they tower spectacularly above the city streets—it is possible to watch one projection and see another playing in the near distance—these moving images are introspective, an effect that is amplified by, though not dependent upon, Murphy and Bédard’s iPhone accompaniment.

In all, it’s a work that is better experienced than described. (For those of not in Montreal, a video compilation is attached.) As we push toward the winter equinox, it may be thought of as a light-filled respite to soften the hard, grey edges of what can be a bleak time of year—a reminder to chase the light at the end of that long, cold tunnel.