Art Souterrain and Nuit Blanche both light up the night in Montreal this Saturday, leading our must-sees for the week. 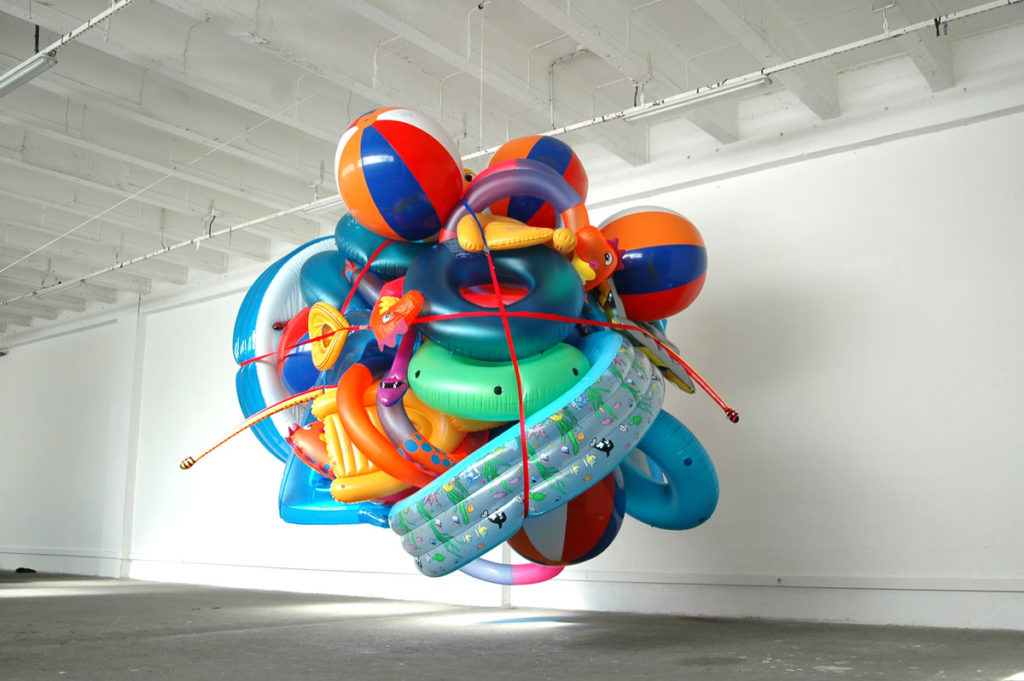 Inflatabowl, an installation by French artist Laurent Perbos, is one of many highlights of Montreal's Art Souterrain public art festival, which opens during the city's Nuit Blanche event on March 4. Photo: Courtesy Art Souterrain.

Lots of great art exhibitions and events are taking place across the country this week. Here are our recommendations for debuting shows and events, and a few reminders about shows that are closing. Visit our Exhibition Finder for even more worthwhile shows that are already open.

As part of Montreal’s Nuit Blanche on Saturday night, March 4, the city sees numerous exhibitions and programs this weekend. Notably, March 4 marks the opening of Art Souterrain, with over 58 projects by 67 national and international artists removed from traditional gallery spaces and placed within more accessible platforms across the city. Among them are works by Laurent Perbos, Bevan Ramsay, Chloé Lefebvre and Olivia Mc Gilchrist.

Diagonale, in collaboration with the Festival du Nouveau Cinéma, present a DJ set by Lynn T to close Lisa Lipton’s ongoing exhibition “THE IMPOSSIBLE BLUE ROSE,” from 3 to 4 p.m. on March 4. The Guild will have a public opening for “Onimiskiskaw Nitehik,” an evening of performances by Atikamekw artist Eruoma Awashish and actress and singer Chloé Sainte-Marie, on March 4 from 8 to 11:30 p.m.

OCADU presents a discussion between Luis Jacob and Mark Kingwell, titled “Where is Your Disruption?: Fragmentation and Entanglement in Contemporaneity” on themes of fragmentation and disorder, on March 7 at 7 p.m.

Blood, Milk & Tears, an artist collective including Asma Ali, Siham Chowdhury, and Manaal Syed, will have an opening reception for a new site-specific installation at the FENTSTER window gallery on March 8 from 7 to 9 p.m. “Mapping Safe Crip Spaces,” the second event in the Studio 2017’s Winter Speaker Series, is an interactive workshop facilitated by disability activist and artist Maayan Ziv, held at Ryerson University’s Transmedia Zone on March 7 from 7 to 9:30 p.m.

On the evening of March 2, AGO First Thursdays, using the theme of “Still Nasty,” hosts d’bi.young anitafrika and her band the 333, along with installations and performances by Hazel Meyer, Mariam Magsi, Zahra Saleki, Golboo Amani and Coco Guzman. Talks by Aylan Couchie, Genevieve Flavelle and Robin McDonald, among others, are also on tap.

Ryerson Image Centre Student Gallery presents Benjamin Freedman’s “Observations of Foreign Objects in a Remote Town” with a reception on March 8 from 6 to 8 p.m. Parts Gallery presents the opening reception for Kim Atlin’s “Where the Lines Are Drawn” on March 4 from 4 to 6 p.m.

Last but far from least, it’s worth remembering that Kent Monkman‘s exhibition “Shame and Prejudice: A Story of Resilience” closes this weekend, with March 5 being the final day to view the show at the Art Museum at the University of Toronto.

Marking the 20th anniversary of the historic transfer of Hong Kong’s sovereignty, the Vancouver Art Gallery will host a media tour of “Pacific Crossings: Hong Kong Artists in Vancouver,” featuring work by David Lam, Paul Chui, Carrie Koo, Josh Hon, as well as “Howie Tsui: Retainers of Anarchy,” a 25-metre-long hand-drawn scroll that combines martial arts with Hong Kong’s political context, on March 2 at 9 a.m. The VAG will also host a curator’s talk by Wanda Nanibush on March 7 at 7 p.m. as part of the ongoing Marking Place Speaker Series.

Beginning at 2 p.m. on March 4, artist Colleen Brown and scholar Richard William Hill will present readings at 221A as part of its public programs collaboration with the VAG for “Vancouver Special: Ambivalent Pleasures.”  William G. Lindsay will deliver a lecture at the SFU Gallery in Burnaby at 12:30 p.m. as part of the ongoing series Unpacking Art: Lunchtime Talks on Works in the SFU Art Collection.

“Blood Love Trouble,” a group exhibition featuring works by Julia Dahee Hong, Katrina Neigbergal and Casey Wei, will have an opening reception on March 2 from 7 to 10 p.m. at the Burrard Arts Foundation.

On March 2, from 6 to 9 p.m., the Art Gallery of Mississauga will launch its two spring exhibitions: Ken Lum’s “A Matter of Life and Death” and Nam Phi Dang’s “Somewhere Else | Xit-RM,” a photo essay from Dang’s trip to Vietnam. Lum will present at an artist’s talk at 7 p.m. on March 2.

Blackwood Gallery will host the free public forum “Don’t Forget the Money!: Working with Dancers in Contemporary Art Spaces,” a half-day event discussing dance and choreography in contemporary art including Jessica Patricia Kichoncho Karuhanga, Francesco Gagliardi, kumari giles, Brandy Leary and Emelie Chhangur, among others, on March 4 from 2 to 5 p.m.

THEMUSEUM will hosts a reception for “Cause for Celebration?: First Things First,” an exhibition addressing healing and justice through works by Mohan, Nyle Johnstone, Anong Beam, and Ann Beam, on March 4 at 6:30 p.m.

Artspace will host the opening of Mississauga-Anishinaabe artist Olivia Whetung’s “tibewh,” a solo exhibition engaging with beadwork from the Trent-Severn Waterway, on March 3 from 7 to 10 p.m.

On March 4, Artspace will host an Art + Feminism Wikipedia Edit-A-Thon, an initiative and workshop committed to increasing documentation of women-identified artists on Wikipedia, from 12 p.m. to 4 p.m.

Laura Taler’s “The soft and the pliable will defeat the hard and the strong.+,” a solo exhibition featuring video installations and collage, opens at Gallery 101 on March 4 with a reception from 2 to 5 p.m.

Urban Shaman will host a community discussion on March 7 from 7 to 9 p.m. for the upcoming project “A Place Between: A 60’s Scoop Arts Project,” which plans to feature 24 contemporary Indigenous artists who have produced artworks, performances, writing, and films in which they each describe a myriad of experiences on being adopted out or placed in care.

Plug In Institute of Contemporary Art will open its Stages Speaker Series with a talk by Norwegian installation-based artist Toril Johannessen on March 6 at 7 p.m. Gallery 1C03 presents “Cafeteria II,” an exhibition of paintings, photographs and mixed-media sculpture by artists Elvira Finnigan and Lisa Wood, with a reception and artist talks on March 2 from 4 to 6 p.m

“Life in the Soil,” a three-day event with interactive workshops, excursions and discussions led by artists, activists and farmers will take place at the INCUBATOR Lab at the University of Windsor’s School of Creative Arts, with an opening on the night of March 7. A keynote titled “Gardening as Insurrection,” featuring Robert Lovelace and Ruth Lapp, will take place from 5:30 to 9 p.m.

David Altmejd’s celebrated crystalline sculpture “The Vessel” will open at the Glenbow Museum on March 4. Scripted Asian Dreams (SAD LTD)—Teresa Tam and Michelangela Samiadji—will launch their exhibition “Perfect Memory: Authentic Gift Shop,” exploring stereotypes and values of Asian-Canadian identities, at the New Gallery on March 3 with a reception at 8 p.m.

“How I learned to stop worrying and dance in front of strangers on the internet for no reason at all,” a dance workshop by Hito Steyerl and takeSomeCrime, will take place at the Walter Phillips Gallery on March 6 at 5:30 p.m.

Galerie 3 opens an exhibition dedicated to the works of Daniel Barrow on March 3 at 5:30 p.m.

The Khyber Centre for the Arts will host the town hall forum “Keeping Ourselves and Our Communities Accountable,” a discussion inviting femmes, women and trans-identified individuals to comment on building systems of healing and community-based ideas of care, on March 7 from 6 to 8 p.m.

Confederation Centre Art Gallery opens “When One Space Meets Another,” an installation by Leah Garnett that navigates the shaping of space through nature, construction, and exhibition, on March 4.

On March 3 from 7 to 10 p.m., the Robert McLaughlin Gallery hosts the opening reception for “Twice Removed,” a series of works by Kristine Mifsud exploring the potential of found objects.

Our weekly must-sees, published each Thursday, are chosen from opening and event announcements sent to preview@canadianart.ca at least two days prior to publication. For listings of art openings, exhibitions and events, visit canadianart.ca/exhibitions.