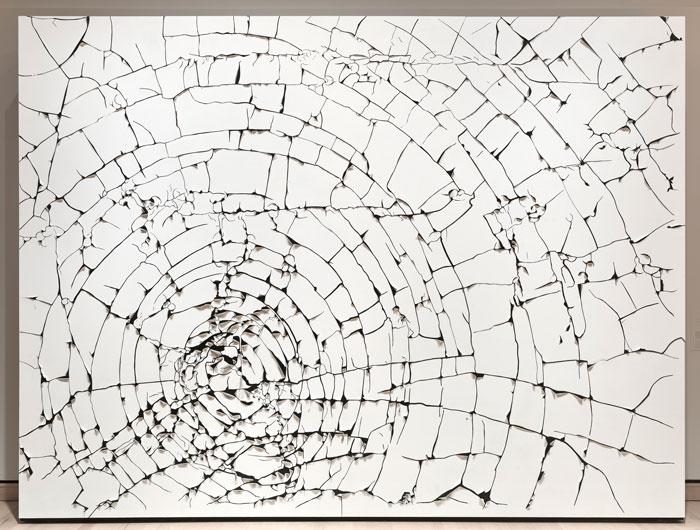 The annual juried prize—which was originated by the Canada Council for the Arts in 1997—is designed to bolster stretched museum and gallery acquisition budgets with a top-up of as much as $30,000 to a single institution for the purchase of a contemporary Canadian artwork to “significantly enhance” its permanent collection. Past York Wilson recipients include the Musée d’art de Joliette, Galerie de l’UQAM, the MacKenzie Art Gallery, the Beaverbrook Art Gallery and the Winnipeg Art Gallery.

BGL is no stranger to the MNBAQ, with a number of the group’s works already in the museum collection. (Their 2006 sculpture Good Night Darthy, a pointed jab at pop-culture and patriarchy featuring a melted Darth Vader, accompanies the Au service de l’impact showing.) But this new piece—a wall-mounted sculptural “painting”—is being billed as major turning point for the trio.

With formal nods to the work of iconic Automatiste painter Paul-Émile Borduas treated to BGL’s trademark material and conceptual wit, Au service de l’impact fits neatly into a broader exploration—both in and out of the museum—of how the legacy of abstract painting and, in turn, the political and culturally charged sentiments of Refus global, have weathered the times in Quebec art and in Quebec society at large. As the didactic text in the gallery puts it, this is a “dialogue on deterioration.”

“For a few years, we have been working on the idea of time passing, the concrete effect of time on ordinary things, and we ended up working with a cracks motif,” the group writes in an email. “This piece is probably a turning point in the sense that we’re searching for how we could make something like a painting in two dimensions that would also be a sculpture in 3-D, a piece big enough to be immersive.”

“It’s a strange way to paint,” they add, “by subtraction, by cutting material out of the surface when, usually, painting is made by addition.”