Works from all award finalists to tour Canada this fall 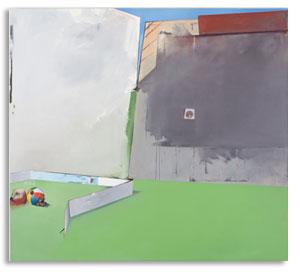 The winning painting by Alexis Lavoie

Jon Reed and Mark Stebbins have won honourable mentions for their works Stato di Impotenza and Data Centers. Both the winner and runners-up were announced September 29 in Toronto.

“The RBC Canadian Painting Competition has established itself as a showcase of the future of Canadian painting and the talent of emerging artists,” says Ann Webb, executive director, Canadian Art Foundation. The first prize of $25,000 and two honorable mention awards of $15,000 each are intended to help up-and-coming artists build their careers.

The goal of the competition is to support and nurture Canadian visual artists in their early career by providing a forum to display their artistic talent to the country and hopefully open doors to future opportunity.

All finalists will be featured in Canadian Art and on canadianart.ca in the coming weeks.