Jeremy Shaw has won the annual prize awarded to a Canadian artist under the age of 40. 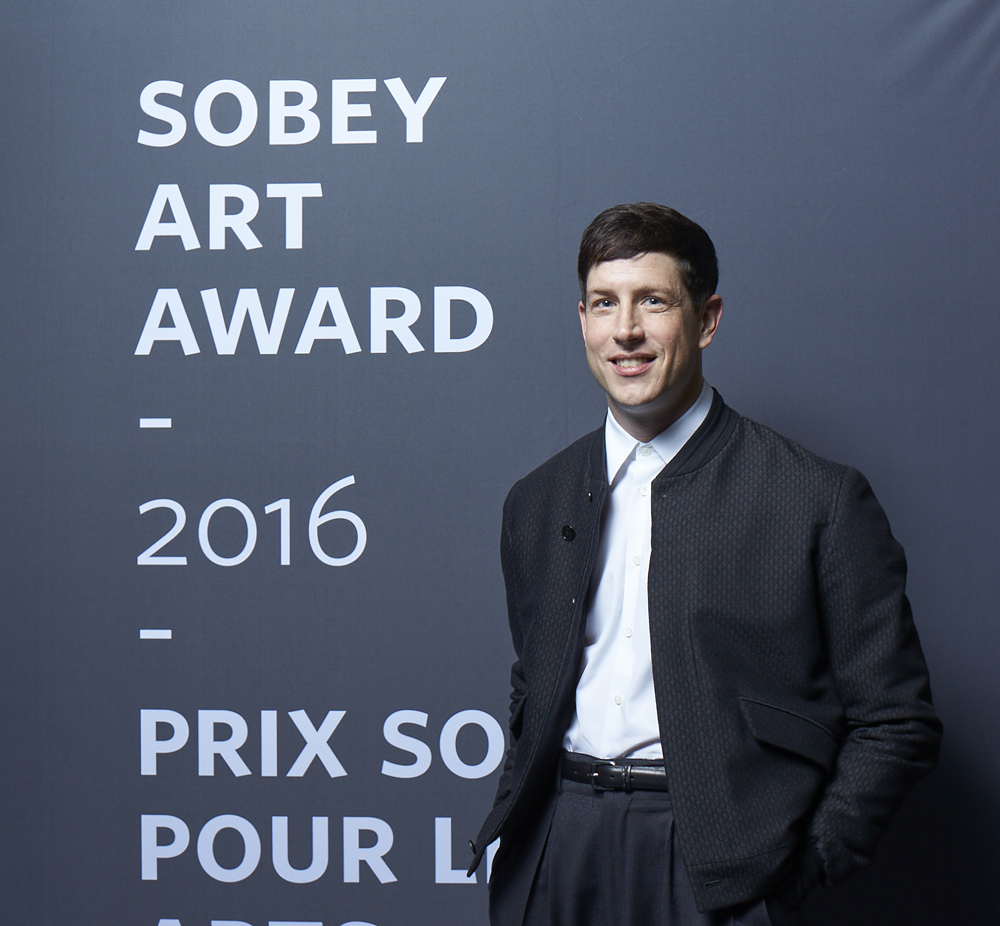 The announcement was made tonight at a gala event at the National Gallery of Canada in Ottawa.

Shaw represented West Coast and Yukon in the prize, alongside finalists Brenda Draney, representing Prairies and Northern Canada; Charles Stankievech, representing Ontario; Hajra Waheed of Québec; and William Robinson of the Atlantic region. The four finalists each receive a $10,000 prize from the Sobey Art Foundation.

Canadian Art spoke with Shaw shortly after the announcement.

Canadian Art: How are you feeling?

Jeremy Shaw: Well, good, but also torn, because I think the exhibition [of finalists is] such a strong show. All of the artists have such strong positions. So I feel good, but it’s also such a strange thing, right? An art winner is such a subjective thing. But I’m feeling good, of course.

CA: Do you have plans for the prize money?

JS: I don’t know, paying off credit cards, probably. I don’t have any immediate plans. I’m an artist and I’m constantly needing money to make things, and continually perpetuate what I’m doing, so I’m sure it will end up going back into the system of my practice.

CA: You are from Vancouver originally, but currently based in Berlin. How do you find working there as opposed to Canada, and do you think this award will spur a renewed engagement with Canada?

JS: My engagement with Canada has never left—I continue to be represented by a gallery in Vancouver, my family is there and I am still quite tied to that scene in a lot of ways. I think, if anything, the award would probably remind people that I’m from Canada. But I don’t think I’ve ever lost that by any means, personally.

Berlin and Vancouver are very, very different cities. Just culturally, it’s extremely different. I went to Berlin because I was making music and art consecutively and it was a place where you could afford to have space and time, which was a tricky thing in Vancouver, and continues to be a very tricky thing as an artist. So Berlin allowed me time, more than anything. Time to work on my art because I wasn’t on this insane anxiety of the financial pressure of the city. So, the working is different. In Berlin you have to be quite self-motivated, because you can easily just go down a hole and not work, because of the lack of pressure to pay your bills. I still love Vancouver deeply and it’s where I’m from, but at the moment Berlin is where I call home.

“Jeremy Shaw’s work speaks to a fundamental longing for transcendence,” said the jury in a press release. “He creates and reflects extraordinary experiences and shows us how art can translate what is challenging to articulate.”

Born in 1977, Shaw graduated from the Emily Carr Institute of Art and Design in Vancouver in 2000, and has shown at MoMA PS1 in New York, Museum of Contemporary Canadian Art in Toronto, Presentation House Gallery in Vancouver and König Galerie in Berlin, among others.

Shaw’s 2015 solo exhibition at the Contemporary Art Gallery in Vancouver, “Medium-Based Time,” featured works including Variation FQ, a video of famed dancer Leiomy Maldonado voguing against a black backdrop; and Quickeners, which repurposed documentary footage of a Pentecostal sect of snake handlers in rural West Virgina into a speculative narrative.

Several of Shaw’s works attempt to represent the effects of mind-altering substances—or highlight the impossibility of fully representing these experiences. In DMT, a large, eight-monitor video installation, Shaw and seven friends describe the effects of the titular hallucinogenic. His 2015 work Degenerative Imaging (In the Dark) transforms scans of brains under the influence of street drugs into glow-in-the-dark vinyl prints.

The Sobey is an annual prize given to an artist of age 40 or under who has exhibited in a public or commercial art gallery within 18 months of being nominated. Previous winners include Abbas Akhavan (2015), Nadia Myre (2014), Duane Linklater (2013), David Altmejd (2009) and Brian Jungen (2002).

The Sobey Art Award was inaugurated in 2002, and this is the first year that the National Gallery of Canada has organized the prize, which was previously administered by the Art Gallery of Nova Scotia.