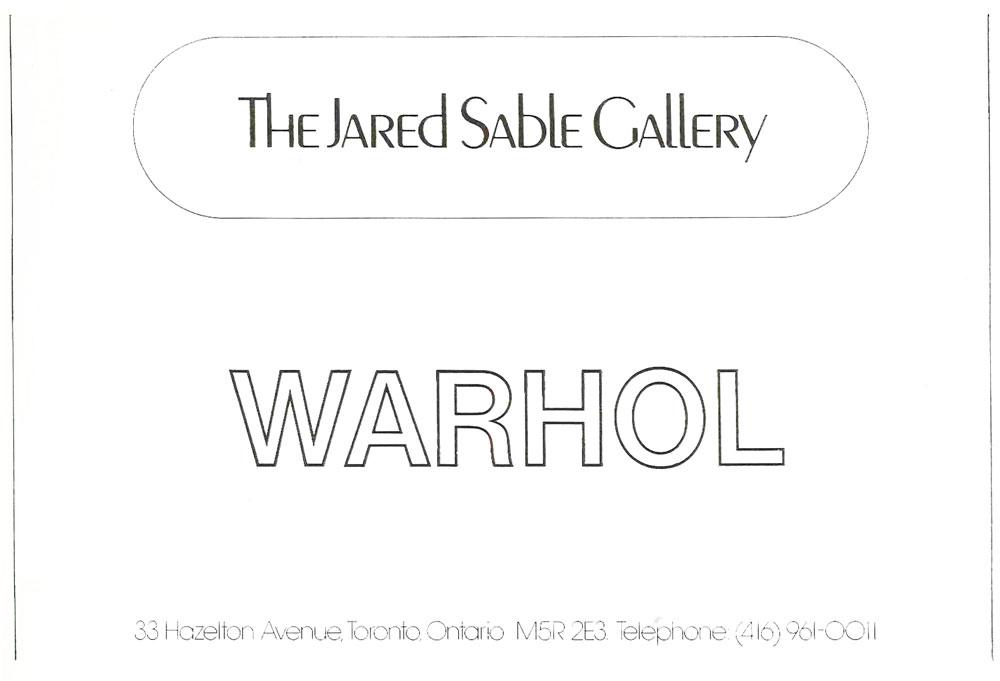 Renowned Canadian art dealer Jared Sable died earlier this week at the age of 77. His funeral was held yesterday in Toronto.

Sable was a steadfast presence on the Toronto art scene for more than three decades. His Yorkville-based gallery, which opened in 1973 as the Jared Sable Gallery and was soon renamed Sable-Castelli Gallery in partnership with famed New York dealer and Sable friend Leo Castelli, was a key venue for bringing cutting-edge work by international artists to the city—Andy Warhol, Richard Artschwager, James Rosenquist, Frank Stella and Eric Fischl among them.

The gallery’s debut exhibitions—one of abstract expressionist painting by Robert Rauschenberg, Jasper Johns and others, followed by conceptual minimalism by Richard Serra, Lawrence Weiner, Dan Flavin and Donald Judd—highlighted not only the deep influence and support Castelli would carry throughout Sable’s career, but also the integral part Sable himself would have in broadening the perspectives of the city’s traditionally conservative museum and collector crowd.

Through the 1980s, Sable played an equally important role in launching and supporting the careers of many of today’s best-known contemporary Canadian artists. The likes of Joanne Tod, Barbara Astman, Betty Goodwin, David Urban, Suzy Lake, Tim Zuck, Howard Lonn, Melvin Charney, Tony Scherman, David Craven, Gina Rorai and Will Gorlitz were all regulars at one time or another in the Sable-Castelli roster.

“In the late 80s, when things in Yorkville were roaring,” recalls Sable’s long-time friend and art-dealer colleague Nicholas Metivier, “you could look down on the intersection of Scollard and Hazelton from the top floor of Mira’s [Mira Godard Gallery] on Saturdays when there were Porsches parked bumper to bumper around the corner and people were packed in there for the Scherman or the Craven show…. It was real action, and he was really important.”

The gallery remained a blue-chip anchor on the Toronto and Canadian art scene until its closure in 2005. In the 2000s, the gallery hosted exhibitions by Jessica Stockholder, Robert Youds, Taras Polataiko and Spring Hurlbut, among other artists.

Widely known in the art world for his gruff demeanour (a Globe and Mail article marking the closure of the gallery pegged him as an “artful codger”), Sable’s real legacy boils down to an uncompromising dedication and vision.

“I think one of his great talents was his loyalty and his stubbornness,” says Metivier. “This whole deal of being supportive and nurturing and sticking by his artists was his style. And you have to have a great eye. I don’t think you can make a great eye. You either have it or you don’t. Jared had it.”