A Conversation with the Artist behind UBC’s Reconciliation Pole

Haida master carver James Hart has been creating totem poles for more than 30 years. But he has never worked on anything quite like the Reconciliation Pole 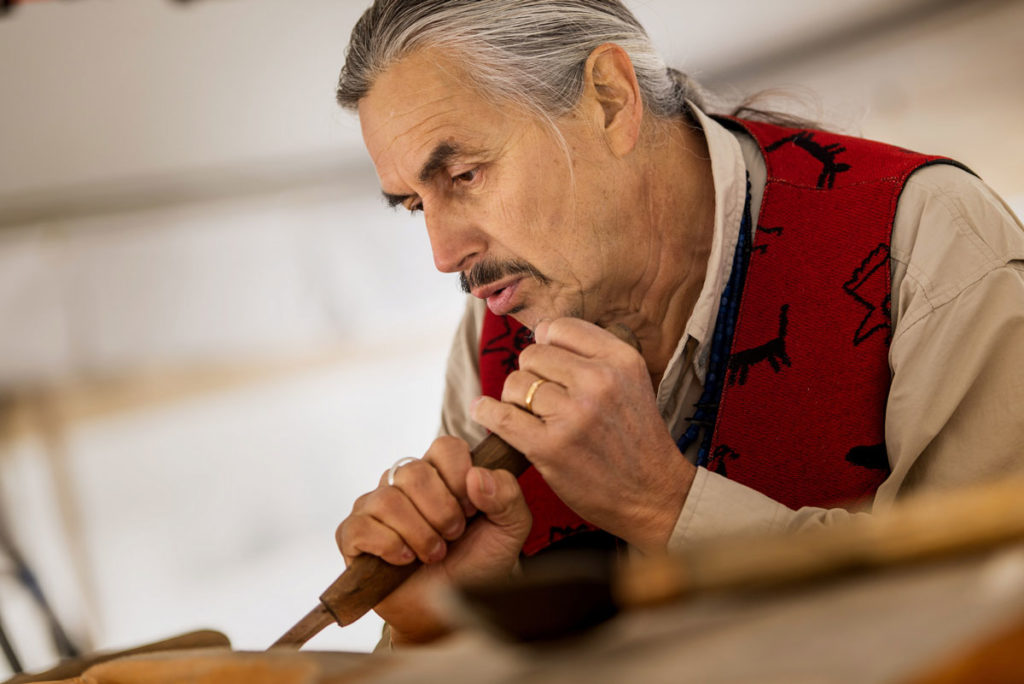 Haida master carver James Hart has been creating totem poles for more than 30 years. But he has never, in his life, worked on a project quite like the Reconciliation Pole.

That 55-foot red cedar pole was raised—before a crowd of hundreds—in traditional Haida fashion on the University of British Columbia’s Vancouver campus this past weekend, garnering accolades from across the country in the press and on social media.

But while the Reconciliation Pole has been met with much praise and celebration, it speaks of a dark and isolating period. Namely, it’s intended to tell the story of the time before, during and after the Indian residential school system—a system that began in the 1800s and ended with the last school closure in 1996.

Among the pole’s features are some 60,000 copper nails, representing the Indigenous children who died as a consequence of Canada’s residential schools. Each nail was hammered into the pole by residential school survivors, affected families, school children and others. Also included is a carving of a residential school that Hart’s own grandfather attended. (To view a diagram of the entire Reconciliation Pole and its stories, click here.)

In this interview, James Hart talks with Leah Sandals about how the Reconciliation Pole came to be, what he has learned from it and where he is going next. 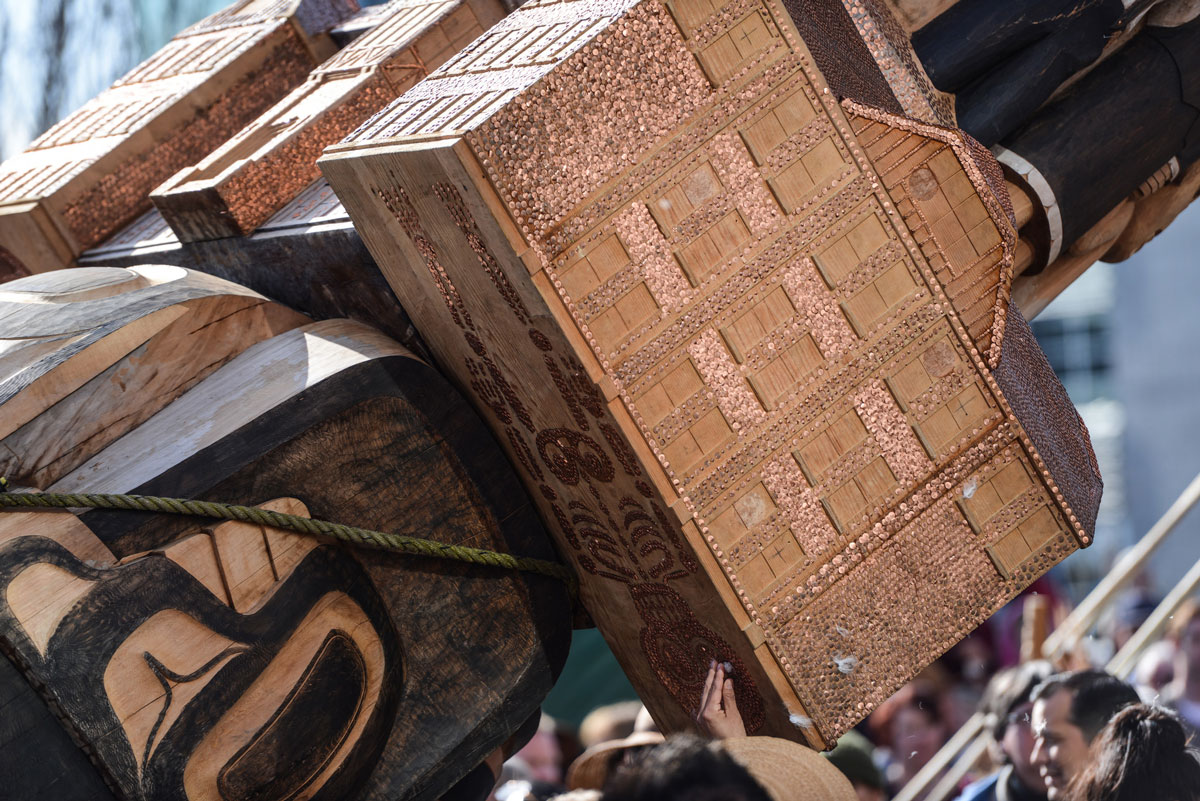 A carving of the residential school that James Hart’s own grandfather attended is part of the Reconciliation Pole, and it is adorned with some of the 60,000 copper nails symbolizing children who died in Canada’s residential school system. Photo: UBC.

Leah Sandals: How are you feeling right now, a few days on from this weekend’s big pole-raising events?

James Hart: I feel pretty darn good that we got it up. Hopefully it does its job in bringing a little more awareness to the past and what has gone on, and also gives us more hope for the future.

The way our children were treated in residential schools was a horrific time for us. We are still getting over that. But we have a good grip on what has taken place and how it affected us, and what we are doing to heal ourselves and move forward. The hope is we move together with Canada and have some say on what is going on in this country.

All the different nations across the country that were in the residential schools lived in their areas for thousands of years, and figured out how to survive with what was around—always working with Mother Nature, in a sense. That’s what we all have in common. And that is something we can offer.

LS: There are so many interesting details in this totem pole’s design. The residential school building is one aspect stands out. How did you come up with the design for the pole?

JH: Well, we discussed it all and decided that reconciliation was going to be the topic. So I went away and thought about it for quite a while; it’s huge when you start thinking about it.

And I said to myself that I’ve got to pay attention to this in a truthful manner; I can’t bring in any false hopes, or that kind of stuff.

So I came to designing it through…. Well, I didn’t go to these [residential] schools, but I lived with a lot of people who went to these schools. I thought about what I knew about it and how it affected us.

I also thought about the children who had passed away [at the schools]. Other children had to dig the graves, and other children had to deal with wrapping the bodies and putting them in their graves and burying them—and then going back to bed. Usually, it was night work. They had big kids doing this kind of work; but they were still kids, they weren’t adults.

Thousands of children died at these schools, and the people who know where the graveyards are, they are all getting on in age. We have to teach our children this part of our history; we have to really pay attention to educating them.

You know, it was a tough project. More and more stuff unfolded as we were working on it.

LS: What kind of stuff?

JH: Just people coming forward from the schools with their experiences, sharing stuff that was going on with them personally. It’s hard—you just start learning more and more and more.

One fellow, just the other day, came and talk to me about the electric chairs they had at some of these schools to punish the children. This system was set up to maim nations; it wasn’t set up to help them at all. I mean, maybe they learned English, maybe they learned how to play soccer. But I know they used them for slave labour working on farms.

And you know all the abuse that happened there, it was designed, really designed. But the thing is, here we are here today. And we want to move forward; we want to be part of Canada; we want to do things in the proper manner. We need to all step forward on that. We want a brighter future, like everybody.

LS: Can you say a bit more about the choice of copper nails in the design?

JH: Well, copper is an important metal for us on the Coast—it was more important than gold to us. In the old days, we made these things called coppers—a particular shape for something like a banking system. Copper was a really important thing. So I figured, copper nails.

Copper is also good for the wood. It won’t let lichen in. And right now, they still look shiny. It’s really nice. And when you get up towards the upper half of the pole, you have the father, mother and children—and there are copper nails in the border of that. That represents us carrying the people that have passed away in the past, and that we want to keep alive.

LS: It all sounds like quite a project. What was the biggest challenge, do you think?

JH: I got old on this project. But I’m happy to be involved with it, because it’s got this meaning, and it’s bringing stuff to the surface, hopefully. We weren’t trying to round the edges on that—it had to be stark naked, everything exposed.

And they are actually building a house on the university campus where people can come and research the stories [of residential school survivors], so that is a really interesting thing, too.

LS: What’s next for you?

JH: Well, I have a project unfinished at home. Right now, we are just winding up things here [at UBC], doing little tidbits on the pole that we sort of missed. It’s amazing how little details slip by, so we are just finalizing all that this morning.

And then, after this, I head north, back home to Haida Gwaii, to finish a project I started quite a while back. The people have been quite patient. It’s always two or three years [on a project]. This Reconciliation Pole was over two years in the making, and that was a long haul—and that’s six of us at home and four of us down here.

This was certainly a big project, lots of work. We were working outside on the project all the time, except down in Vancouver, they brought tents for us—and instantly my crew got spoiled! You put a tent like that up at home, and it’ll blow away and get torn to shreds a matter of minutes.

LS: Are there any other things you want people to know about when they are looking at or thinking about the Reconciliation Pole at UBC?

JH: Well, I think we are working on the plaque that goes next to the pole, on the wording for that. That’s still to come.

And I think if you are interested in the pole, you should start looking into things. Also, I had different artists across the country each come to do a child on the pole—we had Inuit, Mohawk, Maliseet and we even have an Aleut face on there, because were are paying respect to the American side. One of the faces was going to be done by a good friend who just passed away, so we have to look for another person to finalize that.

Residential schools affected everyone across the country, and it’s amazing how we are all going through it, still—and, well, how we are picking ourselves up. 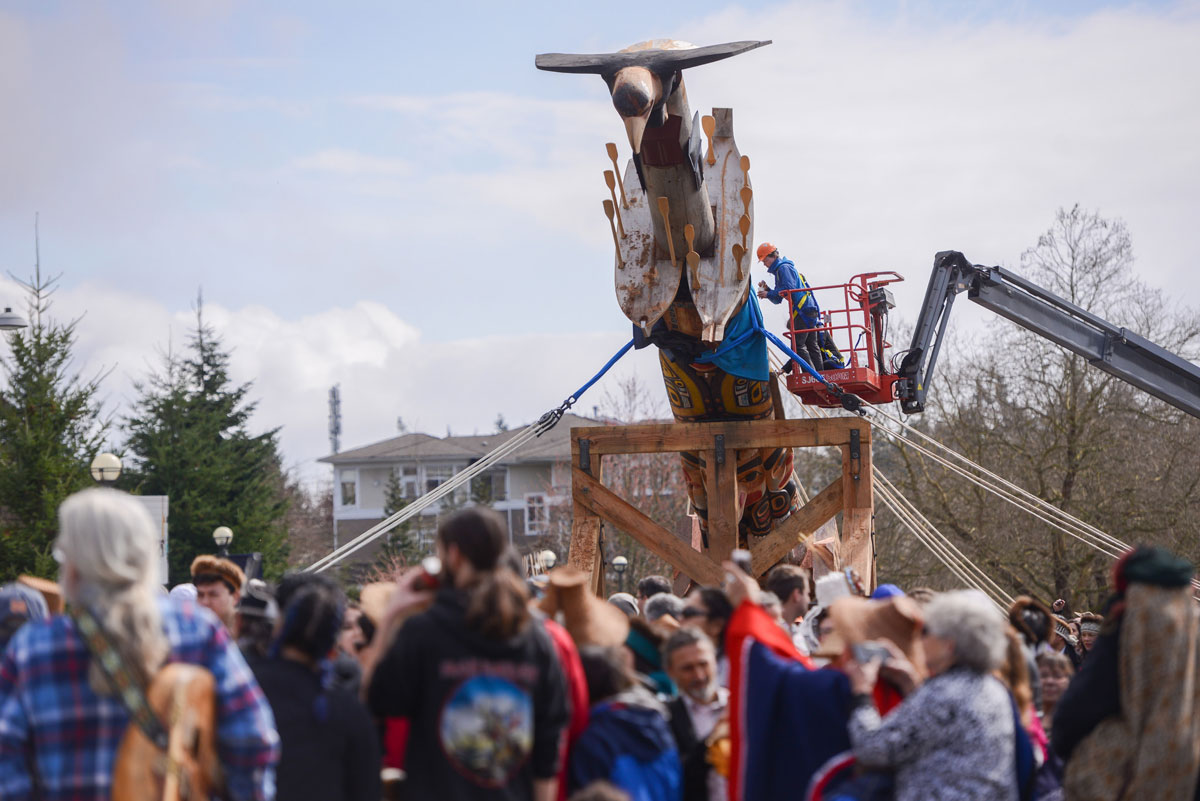 Hundreds were present for the raising of the Reconciliation Pole on UBC’s campus April 1. At the top of the pole is an eagle, coppers and a canoe and longboat travelling peacefully side by side—the canoe represents First Nations people, and the longboat Canadian people. Photo: UBC. 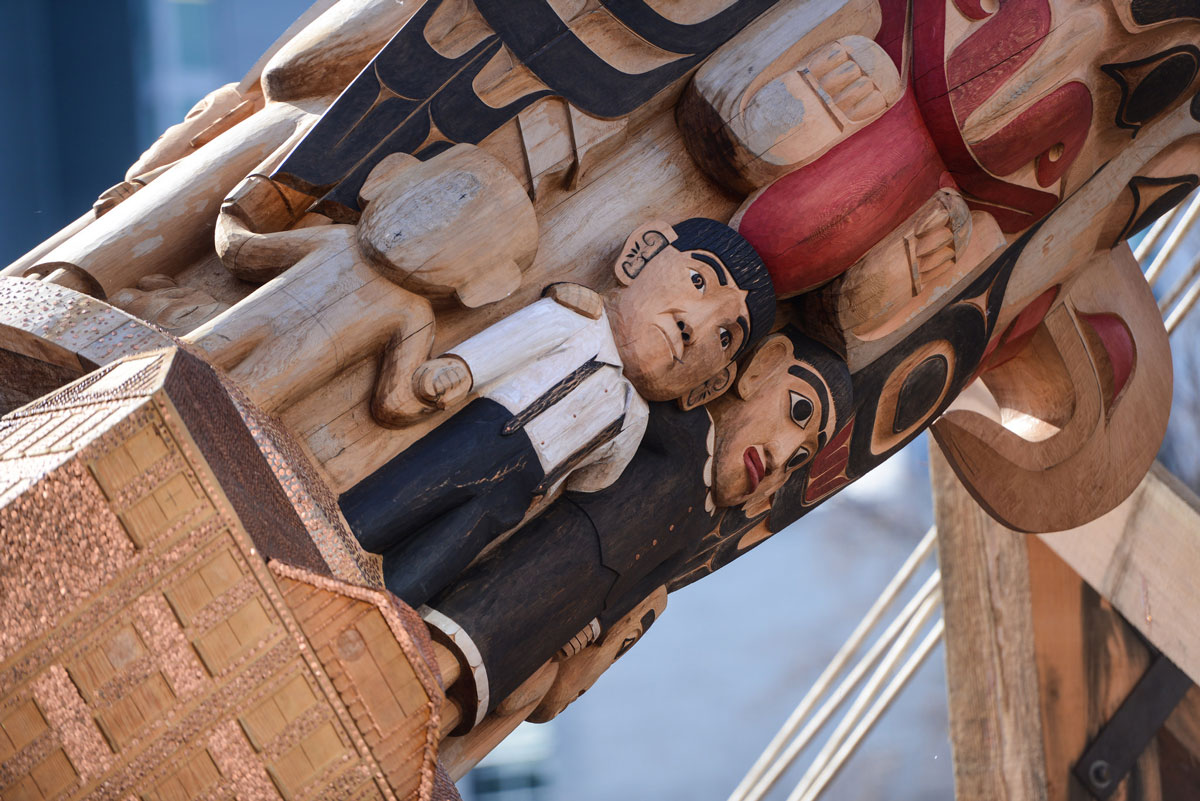 Artists from across Canada, including Mohawk, Maliseet and Coast Salish carvers, worked on images of children pictured on the Reconciliation Pole. Photo: UBC. 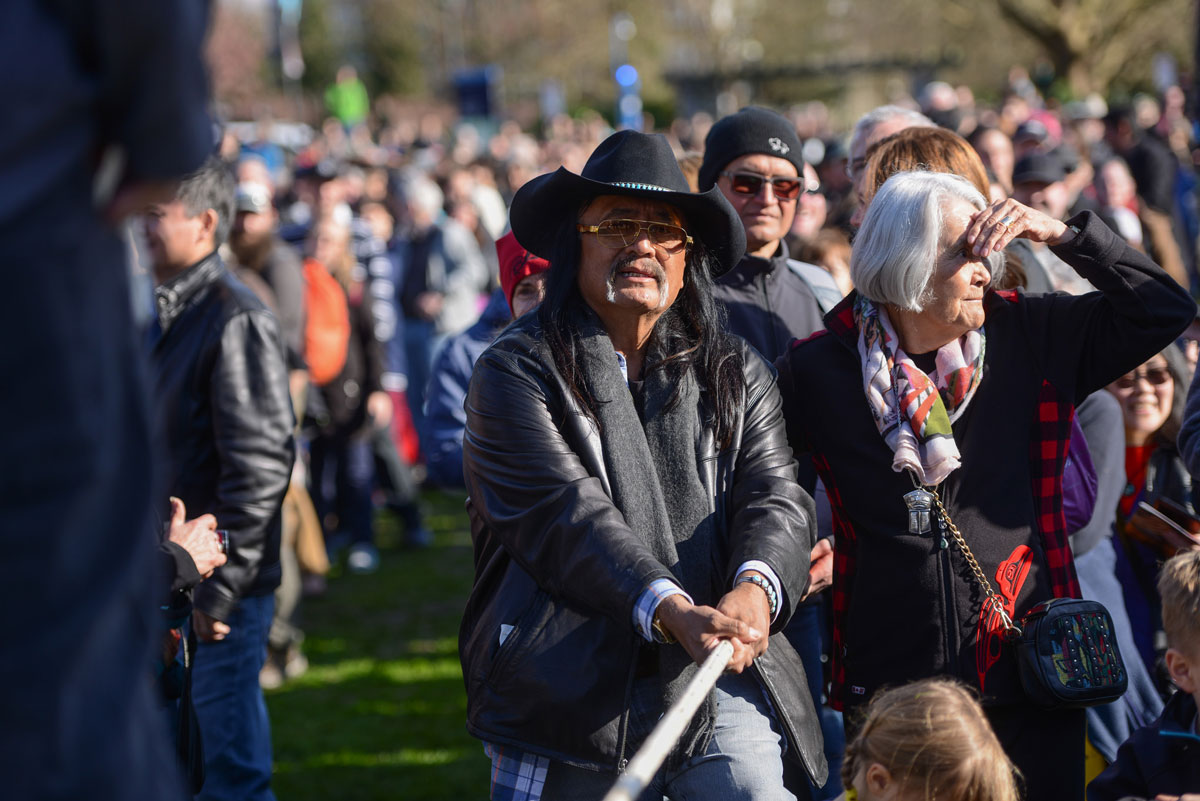 The 55-foot red cedar Reconciliation Pole was raised in the traditional Haida manner, with several teams pulling on ropes in a coordinated fashion. Photo: UBC. 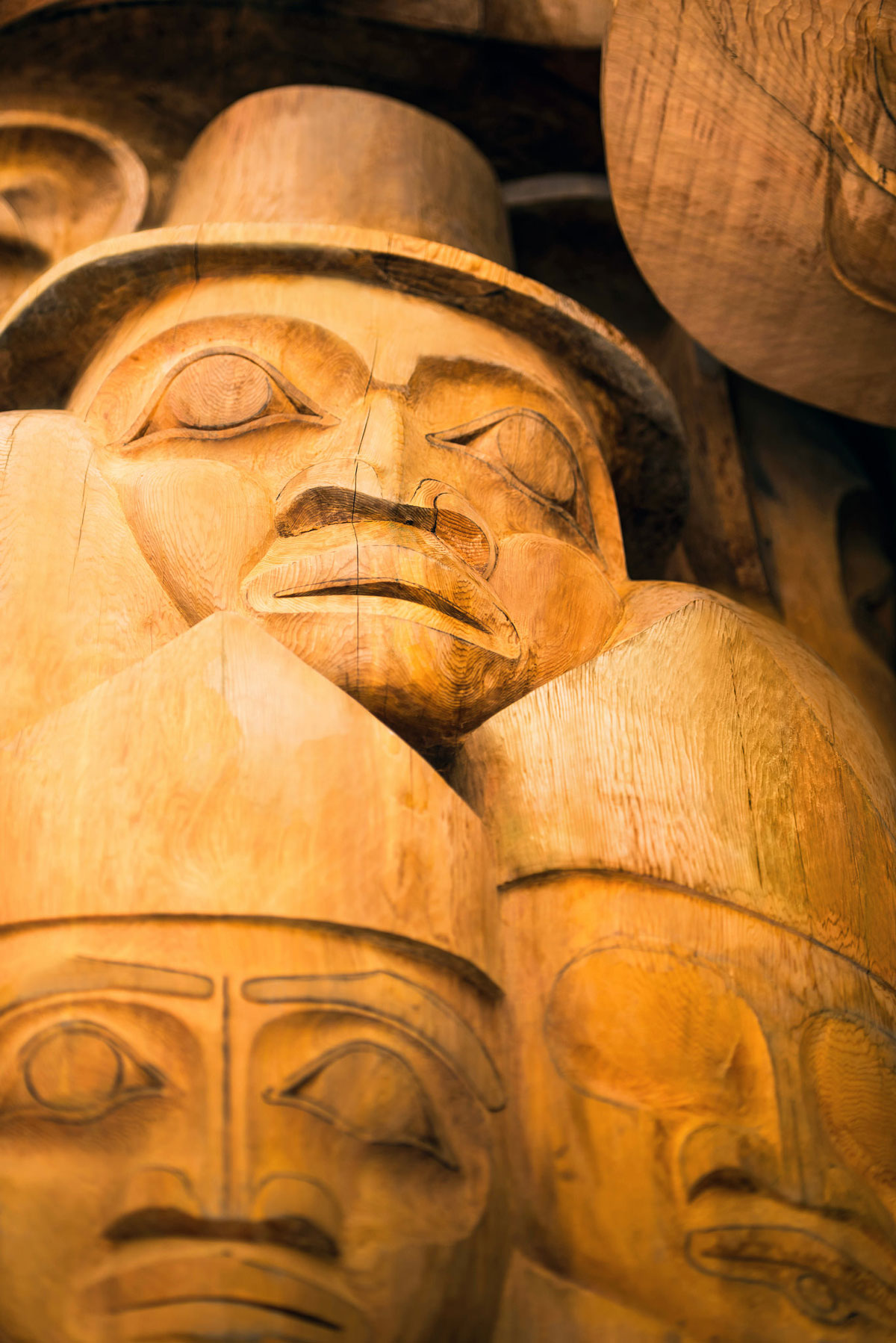 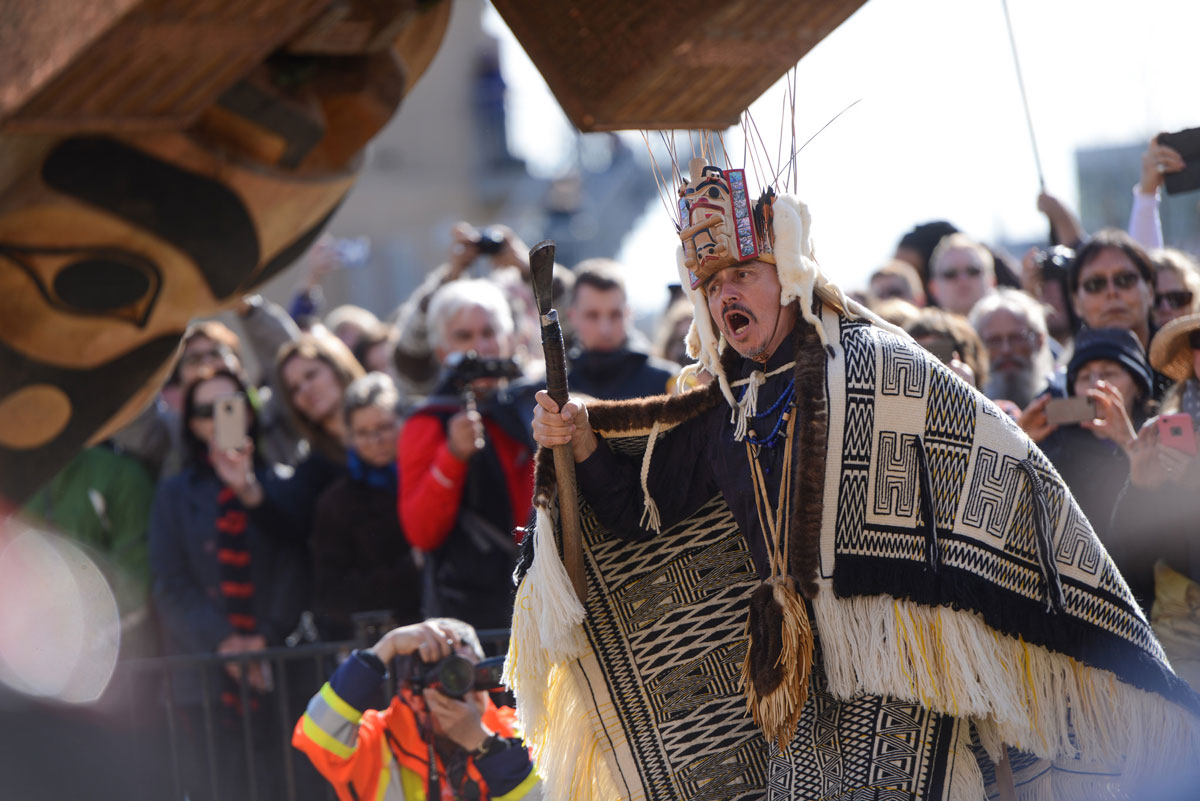 James Hart at the raising of the Reconciliation Pole. Photo: UBC. 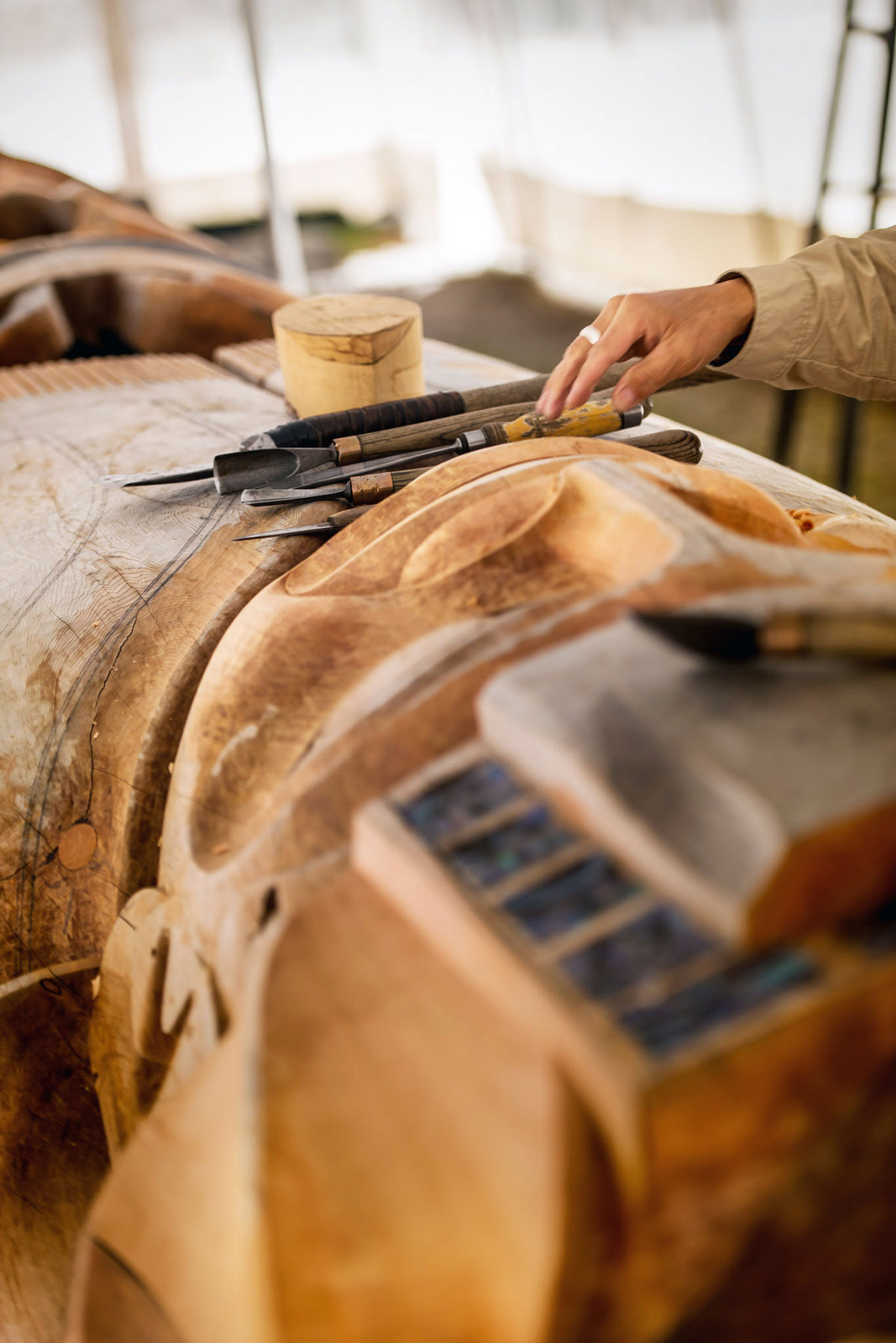 While being finished on the UBC campus, James Hart and his team worked in tents, with various tools. Photo: UBC/Paul Joseph. 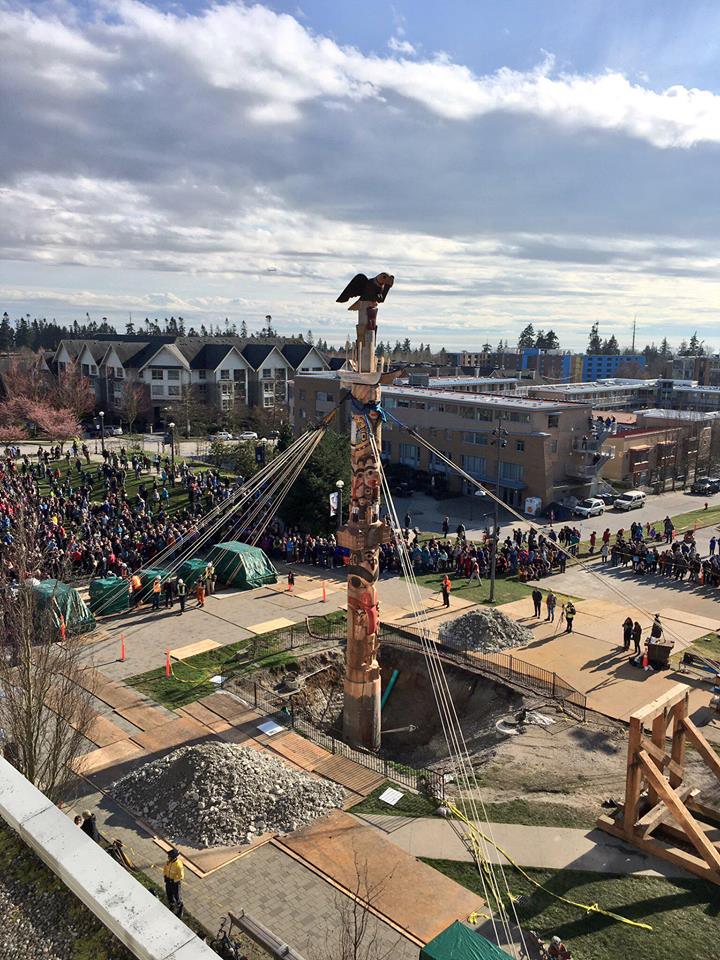 The Reconciliation Pole faces the site of UBC’s Indian Residential School History and Dialogue Centre, due to open in the 2017/2018 school year. Photo: UBC Facebook page.