Inuit artist Billy Gauthier and writer Delilah Saunders, among others, ended hunger strike this morning as the government agreed to reconsider hydro risks. 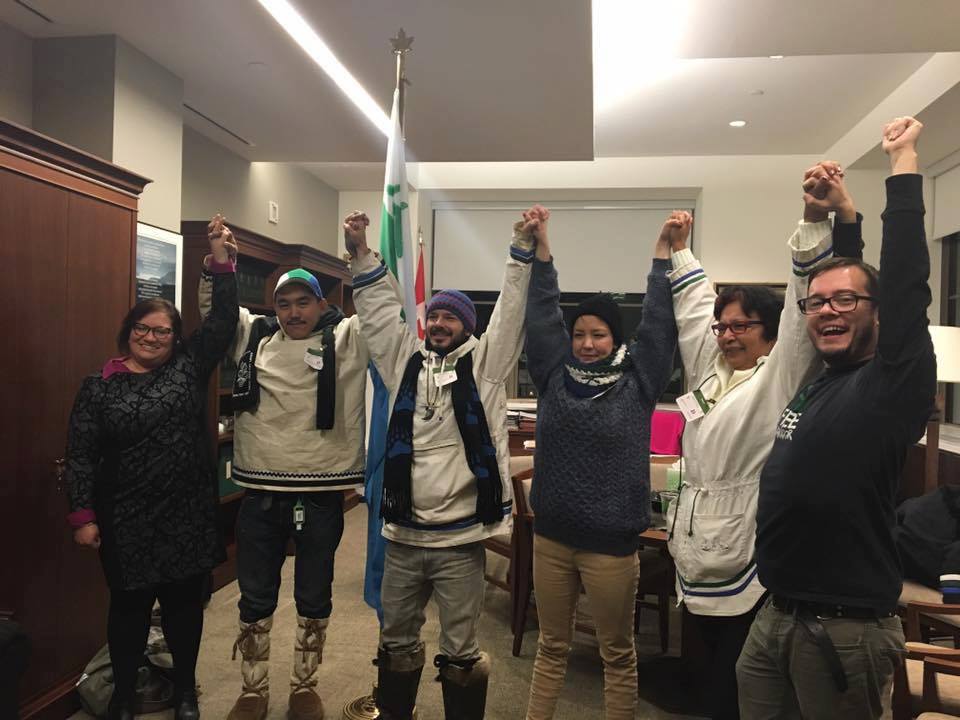 After 12 days of going without food to protest environmental problems associated with a hydro development in his home of Labrador, Inuit artist Billy Gauthier and his fellow hunger strikers finally broke their fasts early this morning.

“The first thing they ate was smoked Arctic char caught up in north coastal Labrador,” says Ossie Michelin, a Labrador writer, activist and spokesperson for the strikers.

After Gauthier began his hunger strike on the evening of October 13, saying he would continue it until the government took action on mitigating methylmercury risks in the Muskrat Falls hydro development, he was joined by other hunger strikers. Among them are Inuit writer Delilah Miriam Saunders, who has been involved with the Oopik arts collective in Halifax and is writing a book about her relationship with, and traumatic loss of, her late sister Loretta Saunders.

On day nine of his hunger strike, Gauthier, Saunders and fellow hunger striker Jerry Kohlmeister travelled to Ottawa for a protest action there, bringing further media and legislative attention to the struggle.

The breaking of the hunger strike came in Labrador MP Yvonne Jones’s Ottawa office around 1 a.m. this morning after 12 hours of negotiations between the Newfoundland government and Indigenous leaders.

The hunger strikers and their supporters heard the news over the phone in what Inuk researcher Brandon Pardy, at their side, described on Twitter as a moment of “high emotions.”

High emotions on phone to hear the content of #indigenous leaders and province agreement tonight on #MuskratFalls pic.twitter.com/vv3wMfNcu8

“I’m going to sleep with a full tummy for the first time in 10 days and a very, very full heart,” Deliah Saunders wrote on Facebook today. “Will write more tomorrow but I want to say nakummek to everyone who continue to protect our beautiful land and way of life.”

In a press conference of government and Indigenous leaders early this morning, the impact of the hunger strikers and other protestors was recognized.

“We are thinking of our young people who put their lives on the line to protest against the Muskrat Falls project,” said Nunatsiavut President Johannes Lampe. “And the land protectors, who are within the project site and also those who are outside.”

When asked for next steps, activist spokesperson Ossie Michelin was succinct.

“The next steps is that they rest, they eat, and they get back home to Labrador tomorrow…after that we will have a big community feast,” Michelin explains.

Michelin says Billy Gauthier is looking forward to getting back home, back on the land and having some alone time, too.

Over the course of his hunger strike, Gauthier and the #MakeMuskratRight cause garnered wide support, with national artists’ organization CARFAC being one group among many to voice support: “The Canadian Artists Representation/ le Front des artistes canadiens (CARFAC National) announced today their full support of Inuk visual artist Billy Gauthier as well as Delilah Miriam Saunders and Jerry Kohlmeister,” a release stated on October 23, “CARFAC recognizes the unconditional and inherent relationship between the health and wellness of Indigenous people’s lands and their artistic and cultural works.”

The nature of the new negotiated agreement, according to a government press release, is that Indigenous leaders will be provided with engineering reports and opportunities to facilitate additional mercury mitigation measures in the coming months.

An Independent Expert Advisory Committee including Inuit representatives will also be formed “to seek an independent, evidence-based approach that will determine and recommend options for mitigating human health concerns related to methylmercury throughout the reservoir as well as in the Lake Melville ecosystem.”

For more information and updates, follow the #MakeMuskratRight on social media.