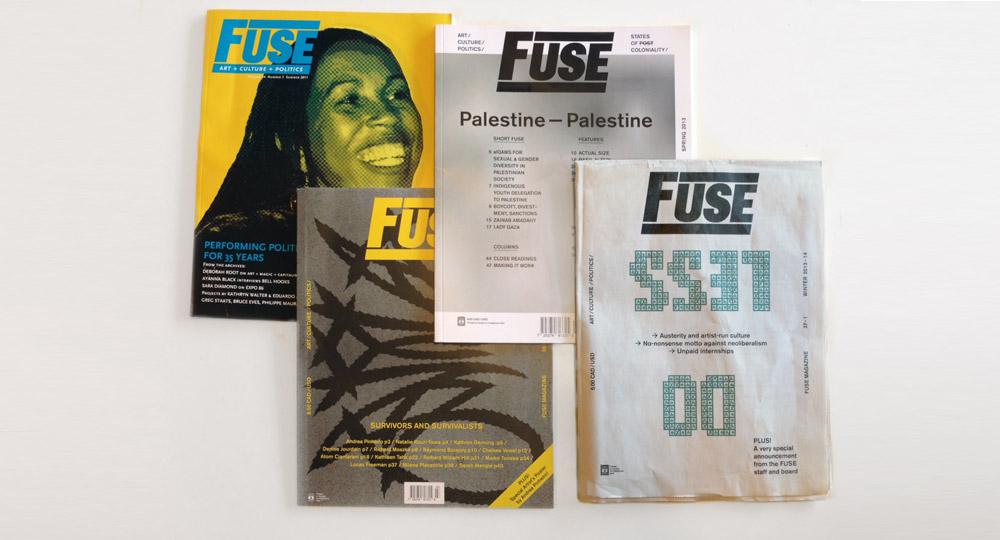 Many in the Canadian art scene were surprised to learn recently that Fuse—a quarterly magazine known for its politically engaged approach to the contemporary art world—would be coming to a close following 38 years of publication.

“This decision has been made with many heavy hearts,” Fuse editorial director Gina Badger tells Canadian Art.

Badger, who was hired in spring 2011 following a 100 per cent cut in the magazine’s Canadian Heritage funding, announced the decision to readers in an editorial in Fuse’s Winter 2013–14 issue.

“After much careful planning and consultation with our elders,” Badger’s editorial reads, “we have come to the conclusion that this is no longer a viable project under current conditions.”

Instead, Badger plans to spend the rest of 2014 on two projects that she hopes will “honour the legacy of the magazine.” One project is a final commemorative print issue—a special edition that will compile material from what would have been the regular Spring 2014, Summer 2014 and Fall 2014 issues alongside material from Fuse’s archive. This commemorative issue will launch in September 2014. The other project is an online archive of all Fuse issues dating back to 1976, also due to launch this autumn.

In the coming months, Fuse also intends to post some new reviews online. All current subscribers will receive a copy of the commemorative triple issue.

“We work at the intersection of publicly funded art and publishing, and it’s 2014 now—both of those sectors are really suffering, so it’s a pretty lethal combination,” Badger elaborates.

Badger says that, in keeping with the magazine’s commitment to fair labour practices in the arts, all writers, artists and other contributors will continue to be paid in full for their work in 2014—even though a commitment to full payment has also put Fuse at a competitive disadvantage.

Clive Robertson, one of the founding editors of the magazine and now an associate professor at Queen’s University, notes that this is just the latest Canadian art periodical to have foundered.

“The funding agencies don’t seem to be anxious about print publications going down,” Robertson said. “You know, it happened with Parachute.” (Parachute, based in Montreal, suspended publication in 2007 following 33 years of publication.)

Accordingly, Badger notes, there is a sustainability issue at hand that also contributed to her board’s decision to wind down publication rather than try to hand it off to someone else as a “hot potato.”

The current and final quarterly issue of Fuse reflects upon austerity economics and the slow chipping away at operational funding in the arts. It is printed on newsprint rather than more expensive stock, and the centrefold created by the Ladies’ Invitational Deadbeat Society reads “Do Less With Less / Do More With More.”

“I think [as with] most people who work in the arts, we recognize the implicit demand to constantly produce more programming and more content despite the fact that, if we are publicly funded, our budgets have been frozen for a few years now,” Badger says regarding the “Do Less With Less” centrefold.

She adds, “We thought [making that centrefold statement] would be an important thing to do and say publicly because we don’t have anything to lose at this point. Everybody would like to do less with less, but often when you are filling out grant applications…there are certain expectations that you continue to produce the same amount” —if not more.

While founding editor Robertson says he feels “Fuse is lucky to have lasted 38 years,” he isn’t sure what might replace it.

“[Fuse] had many functions, but one of the functions it had was keeping an eye on the whole infrastructure of the visual and media arts and on policy,” Robertson says. “It isn’t likely someone will do that; if they do, it will likely be in the academic sphere. It’s not the same.”

Robertson hopes that through its 2014 wrap-up projects, Fuse’s legacy can be extended across the country and into the future.

“It’s really important that the history of practices and projects are accessible to new generations of artists, critics, gallery owners, institutional curators, students and other audiences,” Robertson says. “I’m hoping Fuse can do that [with an online archive].”