Artists expressed support for professional staff of the museum, who have been without a contract since 2015 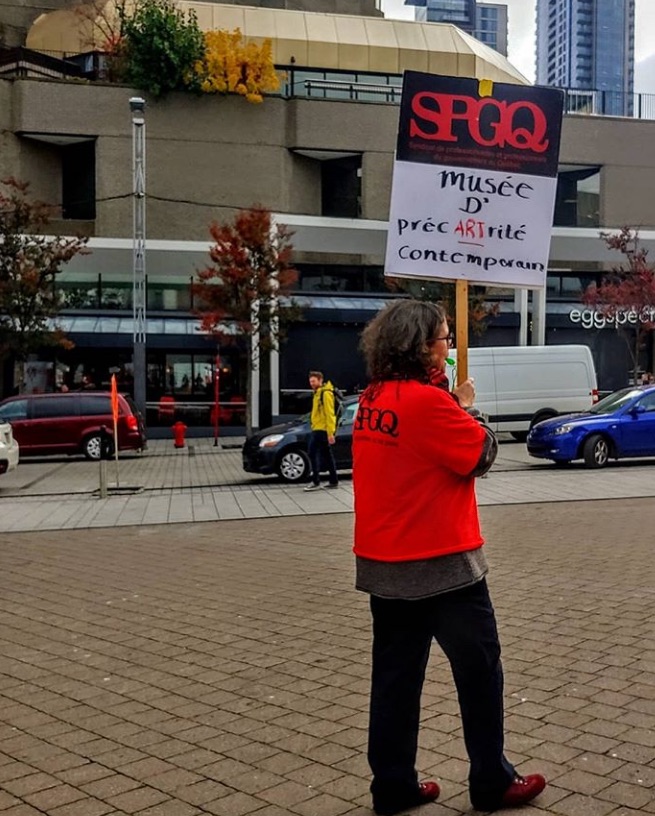 Curators, registrars, educators and information workers—roughly 30 professional staff in all— demonstrated outside the Musée d’art contemporain de Montréal on October 30.

According to a flyer handed out during the strike action, these workers have been without a collective agreement since 2015, and 54 per cent of the museum’s professional staff are on temporary contracts without benefits, insurance coverage or vacation time. Picketers brandished signs with slogans like “Refus-global des salaires austère” and “Musée d’précARTrité contemporain.” They blew whistles and horns and posed for photos with artists, members of the public and passersby who dropped in to show support. Many of the photos were posted to the strikers’ Instagram account.

“October 30, 2019, was the first time our museum members had gone on strike,” said union rep Adi Jakupović of the Syndicat de professionelles et professionels du gouvernement du Québec via email after the strike. “It was a historic day. It is not with happiness and excitement, I can assure you, but out of necessity. These are people who are incredibly dedicated to their work and who take culture and the arts to heart.”

Jakupović noted that Quebec’s provincial treasury board, which controls the museum’s budgets, is a factor in the slowness of reaching an agreement, and “our intent is to return to the negotiating table quickly and get a deal done as soon as possible.” He added, “Obviously, if we were dealing only with the museum, an agreement would, in my opinion, arrive quickly and it would be favourable to all parties involved.”

“The MAC has the utmost respect for all its employees and aims to provide a healthy and productive work environment. As a société d’État of the Government of Quebec, the MAC has put forward what we believe is a reasonable offer, within the parameters set by the Conseil du trésor [Treasury Board] for the current negotiations, that addresses the priority issues raised by the union,” Théoret stated. “We remain committed to reaching a collective agreement that is satisfactory to all parties. The MAC is looking forward to the next round of negotiations in the near future.” 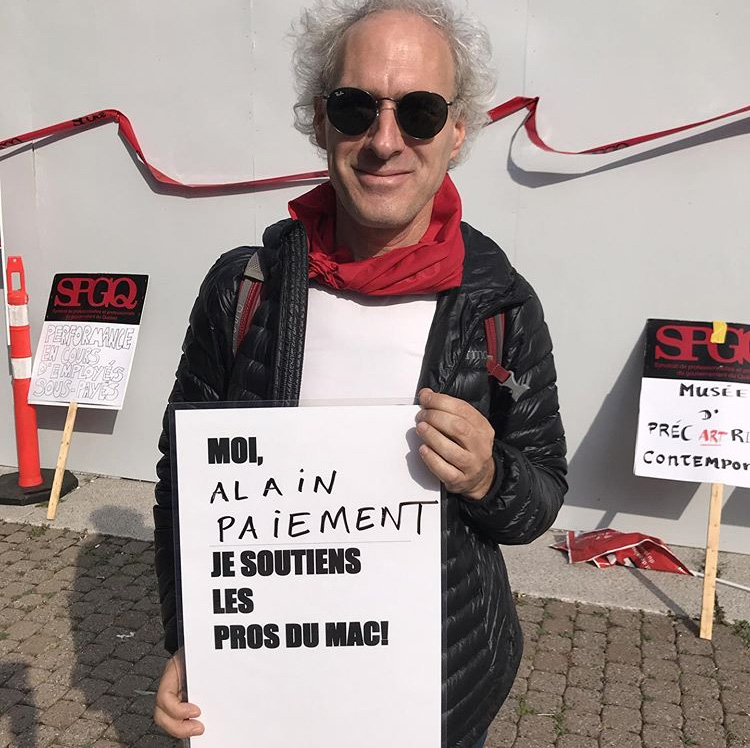 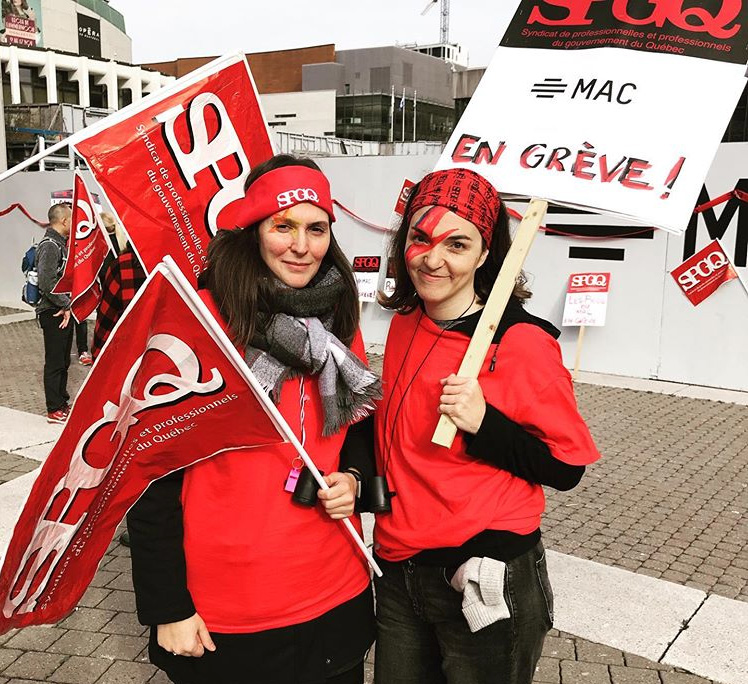 Supporters for the striking workers included local artist Alain Paiement, whose solo exhibition “Bleu de Bleu” opened at the museum that same evening. Museum staff were keen to stress that their action was not a blockade: visitors were still encouraged to enter the premises and view the shows. The picket officially ended at 7 p.m., one hour after the evening’s openings began.

All the same, some supporters, including Paiement, declined to enter before the protest ended.

“Cross picket lines? I don’t do that,” Paiement stated while standing outside the museum with a red union flag tucked into his pocket. “We’re colleagues,” he said, noting that he has been through strikes at l’Université du Québec à Montréal, where he is a professor in the École des arts visuels et médiatiques.

Referring to the museum’s on-hold renovation plans, which relate to the current provincial budget issues for the museum, Paiement said, “This transformation, it’s very difficult for an institution, and I think they should have re-strengthened the team so they could go through that. And they did the opposite, thinking, ‘Okay, you can have ejectable people with these temporary contracts.’ There’s a sense that…it ruins the attachment to the institution. This is where I’m very supportive.”

Luis Jacob, a Toronto artist included in another MAC exhibition that opened that evening, did not attend but offered a comment via email: “I absolutely support workers’ right to strike in order to resolve their grievances. Almost always, striking is only a measure of last resort.”

The striking staff were also joined throughout the day by members of the museum’s technical and support staff, whose separate union does have a current collective agreement.

Union reps for curators, registrars and other professional staff noted that these workers still have nine remaining strike days to deploy as they choose.