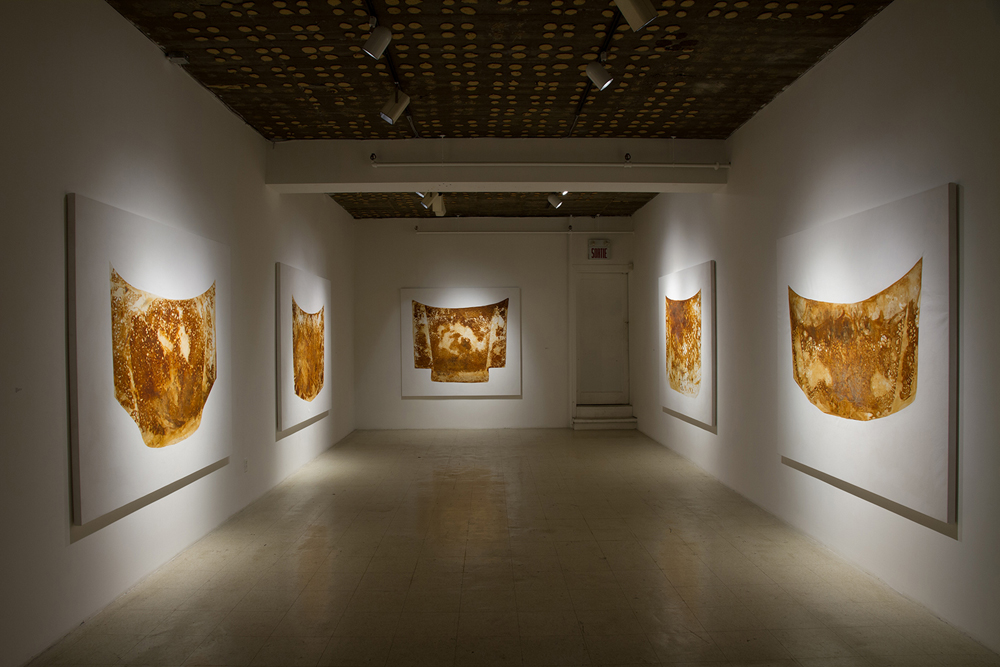 When Cal Lane’s “Veiled Hoods and Stains” exhibition opened at Montreal’s Art Mûr in September 2014, three of the works intended for display were quietly left out of the final selection. According to the gallery’s co-director Rhéal Olivier Lanthier, the gallery was forced to make this decision when one of three packages failed to arrive in a UPS shipment from the Canadian artist’s New York studio. A subsequent investigation determined that the package had been lost after clearing the border. A year later, one of the three canvases contained in the missing package resurfaced on the secondary market and, with it, a trail of suspicious transactions and renewed investigations.

Until recently, Lane’s printed canvases, titled Veiled Hood Stain #7, 8 and 9 (all made in 2014 out of rust and acrylic on canvas, measuring 165 by 208.5 cm) were presumed lost. The artist had filed a lost-package investigation and police report, and, after declining UPS’s offer to settle the claim, held out hope for the package’s eventual discovery and return. Then, last Wednesday afternoon, Lane was contacted by John Macdonald, a stock trader at RBC Capital Markets who came across Veiled Hood Stain #8 at MaxSold, a third-party online brokerage that manages sales conducted privately by registered sellers. Macdonald told Canadian Art that he regularly searches third-party auctions sites during his spare time in the hopes of finding undervalued items that he can later resell at a profit. Researching the lot, Macdonald found a discrepancy in the title, which was listed as Large Unframed piece. 71X91. By Cal Lane. “Veiled Hoods.” Noticing the title was missing the numbering system associated with other works in the series, he reached out to Lane for clarification. In doing so, he alerted the artist to the active sale of work she believed had long since disappeared.

Following up on Macdonald’s inadvertent tip, Lane and Lanthier immediately recognized Veiled Hood Stain #8 and were dismayed to find an active bidding record dating back a week. According to Adam Gordon, MaxSold’s chief operating officer, it was quickly determined that the lot may indeed be stolen, and an outsize bid was placed internally to prevent the sale. From there, Gordon connected the lot to an estate sale in Etobicoke, Ontario, listed by a regular client of the site.

In an interview with Canadian Art, Gordon maintained that this situation is new to his company, which rarely sees listings of contemporary art works. In the ensuing discussions, the seller (who remains anonymous) explained that that the piece had been acquired in March of this year at an earlier auction by another company, the Toronto-based AuctionMaxx, which specializes in liquidating “unclaimed, misguided and damaged freight, retail surplus, insurance claims and consignments from corporations and individuals.” (This sales model will be familiar to fans of Storage Wars and its many spin-offs).

For now, questions remain as to how the work wound up in such a sale, particularly when the package was reported missing and the shipper’s settlement offer rejected. According to Lanthier, the seller is unwilling to part with the remaining work unless Lane can prove rightful ownership, which may be a lengthy process. According to LA-based lawyer Mark Mermelstein, who specializes in white-collar and corporate investigations, situations like Lane’s hinge on the matter of settlement. “If a carrier pays out replacement value, it would typically get the benefit of the salvaged value of the recovered work.” Lanthier is adamant: “Cal didn’t accept compensation. Actually, I think people don’t realize that once they accept compensation, even if it’s a ridiculously low amount, they are giving up ownership of the goods. By not accepting, that means UPS did not have the right to liquidate the goods.”

It’s too early to know how the package wound up in a freight sale, or where the other two canvases ended up, and Lanthier is frustrated that the authorities haven’t done more. “I just wish the police would help us because we can prove ownership: all of the works were photographed prior to leaving, and we can prove they went missing on that date. But it’s quite a challenge and I’m really surprised that the transport companies usually don’t do proper investigations, and, when they find the package, they don’t try to find the owner, they just liquidate.” There is no record of the first auction at AuctionMaxx’s website, and they have not replied to Lanthier or Canadian Art’s request for comment (their stated policy is that they do not share information about buyers or sellers). As for MaxSold, the process may be out of their hands for now, but Gordon wanted to make one thing known: “We would welcome the opportunity to make the sale in the future, as long as everyone is on board.”