There's new money in the federal budget for the Canada Council—find out how much, and how it might trickle down to artists, in this report. 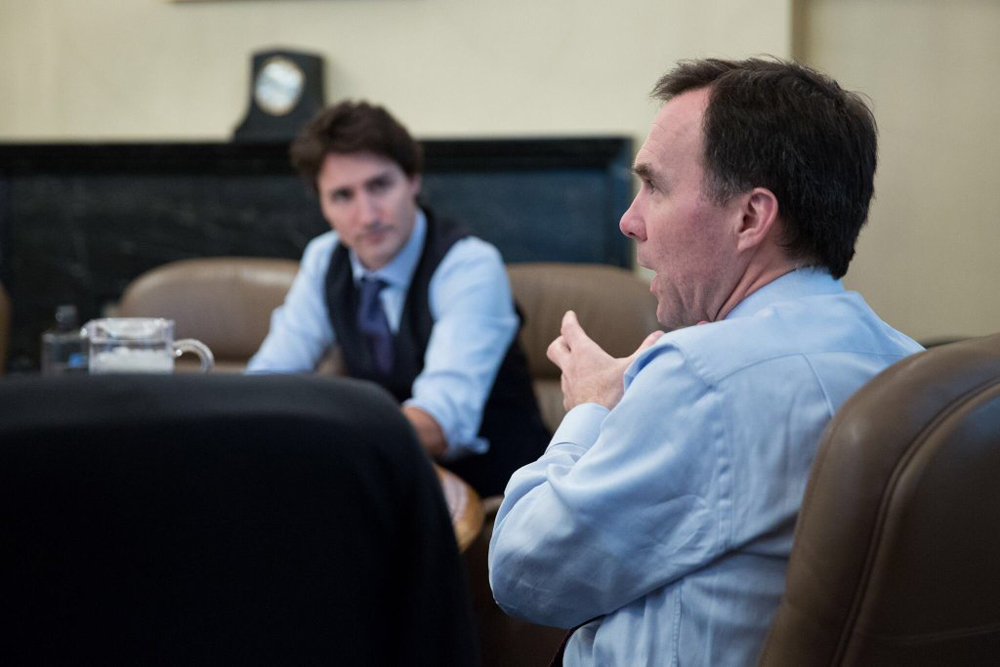 Trudeau also promised to restore and increase investment to programs similar to Trade Routes and PromArt, which, as the CBC reported, “the Tories cut in 2008 and which promote and subsidize Canadian artists and performers touring abroad.”

Since Trudeau’s October election win, however, the Canadian economy has taken a drubbing, prompting many to wonder whether those spending promises would be met.

The answer came in today’s federal budget, which contains millions in new funding for Canada’s arts sector—but much of it will be distributed at a slower pace than originally anticipated.

The federal budget released today offers $40 million in new funding to the Canada Council (on top of its previous $180 million allotment) in the upcoming year.

“Culture is synonymous with creation. It also creates a collective wealth that goes beyond economic benefits and statistics,” Finance Minister Bill Morneau said in his budget speech.

This brings total annual Canada Council funding for the coming year to $220 million—a 20% surge, but $140 million short of the original fall promise of $360 million.

However, the budget plan promises that funding for the Canada Council will increase each year over the next five years—with $75 million in additional funding to come next year, and $115 million more the year after that. The doubling of the Council budget to $360 million under this plan is scheduled to happen in 2020–2021.

Representatives from the Canadian Arts Coalition, the Canadian Museums Association, the Artist Run Centres and Collectives Conference, and CARFAC all expressed optimism at the new Council funding.

“Visual artists in Canada contribute greatly to the economy and our cultural identity, yet more than half subsist on less than $18,000/year,” read a statement from CARFAC. “Providing for more federal grants through the Canada Council for the Arts will have a significant and positive effect on artists’ incomes and the sustainability of their lives.”

Though many in the arts scene had hoped for a larger initial boost to the Canada Council in the first Liberal budget, Council CEO Simon Brault says he not disappointed with the outcome of $40 million add-on this year with a slow ramping up to Trudeau’s $360 million promise in 2020.

“Since the election, we all know that the economy has not exactly been robust, and art is always the first item that is cut in any project of spending public money,” said Simon Brault, director and CEO of the Canada Council, in a phone interview.

“The fact that the government is honouring its commitment, and that we have a very clear idea of how and when the money will be received, is not only reassuring, but it also gives the Canada Council and the community the capacity to react and to figure out what to do exactly,” Brault noted.

“What is happening now has never happened since the creation of the Canada Council, and is absolutely unique worldwide. There is no country in the world right now where the government has major public reinvestments in the arts. We are the only ones,” said Brault. “So I realize how privileged we are, and I realize the pressure that is on us to deliver something that is not a little bit more of the same.”

The results of these new monies are due to become swiftly visible, Brault says.

“We have a very clear idea of how the funds will be allocated, because we are finishing the revision of our strategic plan to be released the week of April 12th, and in that strategic plan we are making commitments for the next five years, so we will invest the new money accordingly,” said Brault.

Some top priorities for the organization, according to Brault: “Raising the level and the quality of artistic creation; making sure that Indigenous arts will be better funded, and funded in a way that respects more self-determination; focusing on digital, which is a huge agenda for the arts sector in Canada because we are lagging behind; and making sure that we scale up the presence of Canadian art in the international stage.”

Budget 2016 also proposes to make investments of up to $280.9 million over five years to support the infrastructure needs of three important Canadian cultural institutions:

• $9.6 million over two years to undertake needed repairs to the National Gallery of Canada, including its iconic windows.

• $114.9 million over two years to support the renewal of the National Arts Centre, which recently broke ground on a new addition designed by architect Donald Schmitt.

• $156.4 million over three years to support the expansion of the Canada Science and Technology Museum through the construction of a new collection and conservation centre.

These investments are in addition to the $168.2 million over two years for the Canada Cultural Spaces Fund, being proposed as part of the Government’s commitment to social infrastructure.

More cash—up to $105.9 million over five years, with $6.1 million per year ongoing—is also promised to help Canada’s national museums address immediate operational and capital pressures. (The allocation of this funding by institution will be announced at a future date.)

While Canada Council funds had been widely anticipated by arts advocates, these infrastructure wins were more of a pleasant surprise.

“There are numerous theatres, galleries across the country that need infrastructure money and were probably many of them created during the centennial funding,” Cornell said.

“So, over the next two years to see that cultural spaces fund receive that kind of investment is important for those cultural spaces to be enriched and for them to grow,” she added.

And museums will benefit from more than just infrastructure updates, said John McAvity, executive director and CEO of the Canadian Museums Association.

“We’re very pleased to see an increase in youth employment,” McAvity told Canadian Art. “The CMA runs a youth-employment program that has been terribly oversubscribed and we have had to turn down some 90% of all applications. So we’re seeing a $5 million dollar increase to that program.

“The Liberals have delivered big time for culture,” McAvity surmised.

Promises on Art Abroad, But Needs on Artist-Run Home Front Too

The budget states that “over the next year, the Minister of Canadian Heritage will be consulting on how best to continue to support Canadian cultural exporters as they contribute to inclusive growth.”

While this move is widely welcomed, some still have questions about how artists and artist organizations at home can best be supported.

The Artist Run Centres and Collectives Conference (ARCA), for instance, released a post-budget statement to the effect that it wants to see the new money at the Canada Council distributed to address gaps in current funding for artist-run centres.

“ARCA is optimistic that this [Canada Council] investment will make up for years of stagnation in the funding of artistic organizations, including artist-run centres (ARCs),” the statement read.

“ARCA sincerely hopes Council will work in close collaboration with arts service organizations for the implementation of the new funding model and consider increases to multi-year core funding to organizations a priority. It’s worth recalling that only 10% of the $146 million in public funding received by visual arts organizations goes to artist-run centres,” the statement continued.

Roundly, the budget announcements signalled positive change that has been largely lacking for the last decade.

“It’s good news and a complete change from the budgets we have been reading for the last couple of years,” noted McAvity.

“I think that the new investment sends a very positive signal about the importance of the art-and-culture sector,” said Brault. “With good will and working together, I think we can make a big difference in terms of the role and the impact of arts and culture in Canadian society. I am very optimistic today.”

Multiple sources noted that it’s not only Trudeau who is to thank for the budget’s arts wins—the boost has been long campaigned for by arts organizations.

“This unprecedented funding increase announcement reflects years of advocacy by volunteers of the Canadian Arts Coalition whose recommendations were delivered collectively by members of the arts community during the annual Arts Day on the Hill events, as well as the relentless hard work by staff at the Canada Council for the Arts,” noted the statement from the Artist-Run Centres and Collectives Conference.

“Since 1968, CARFAC has been fighting for the rights of visual artists. As a member of the Canadian Arts Coalition, we have been asking the federal government to double the funding for the Canada Council for the Arts for more than a decade,” said Susan Tooke, artist and CARFAC National Spokesperson from Halifax in a release. “These financial commitments will contribute to the success of our careers, the growth of our artistic practices and the strength of our sector.”