Artists and Arts Workers Urged to Vote in Federal Election 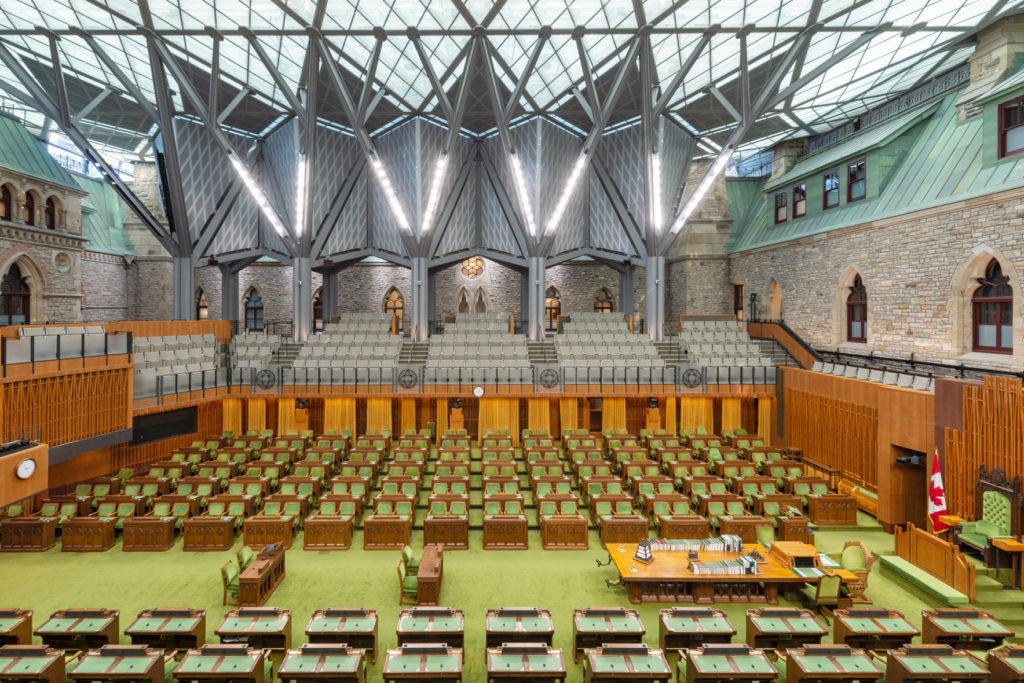 A view of the recently renovated House of Commons in Ottawa, where an 1866 gothic structure has been provided with a new, modern glass roof. Modernized architecture by Arcop and Fournier Gersovitz Moss Drolet et Associés. Photo: Facebook / Parliament of Canada.

“Each of the parties has finally released their platform, and each one of them addresses the arts in one way or another,” says Cornell, co-chair of the Canadian Arts Coalition, said Tuesday. “I encourage Canadian artists and arts workers to look at the platforms and compare and contrast what they have to offer.”

As a national non-partisan non-profit that regularly coordinates advocacy events like Arts Day on Parliament Hill, Canadian Arts Coalition also recently created an election platform document of its own.

That arts coalition election platform is “a wish list of things we would like to see the 43rd parliament address,” Cornell explains. It includes following through on the planned increase of $35 million to the Canada Council, supporting Indigenous arts and culture, establishing an Artist’s Resale Right and growing the Strategic Initiatives component of the Canada Cultural Investment Fund by $2 million per year.

All the federal parties have addressed arts and culture in their platforms this year, which “in the past hasn’t always happened,” says Cornell. The artist organization CARFAC has suggested its members look at a new sector snapshot from Global Public Affairs to help with comparing party offerings on culture—and a few details are summarized below as well.

The Green Party platform promises to “increase funding to all of Canada’s arts and culture organizations, including the Canada Council for the Arts, the National Film Board and Telefilm Canada.” It also promises to “implement a federal income tax credit for restoration expenditures to encourage private involvement in preserving Canada’s built heritage” and “establishing charitable tax credits for the private donation of easements on heritage properties to charitable organizations or local governments.”

The NDP platform states that “artists should be able to earn a decent living from their art” and “government has an important role to play in making sure that a diversity of Canadian voices tell our stories.” It also says it “will provide financial support for Indigenous theatre at the National Arts Centre as part of our larger efforts to honour and support Indigenous arts and culture” and that by “recognizing the special challenges faced by people who make a living in the arts and culture industry,” they will “make life more affordable by putting in place income tax averaging for artists and cultural workers.”

The Conservative platform promises a “Children’s Arts and Learning Tax Credit” that will “allow parents to claim up to $500 per child, each year, for expenses related to arts and learning activities.” It also says it will “make Canada’s national museums free” and “designate the grave sites of former Prime Ministers and Governors General national historic sites.” The platform also proposes that “better support local festivals, community anniversaries, and important community events…will extend the Building Communities Through Arts and Heritage Program for an additional three years.”

The Liberal platform promises to “introduce the Culture Pass, a $200 credit that every Canadian child will receive when they turn 12, to be used to access theatres, museums, galleries, workshops and other cultural venues and local Canadian content.” It also promises to “continue to support Canadian film by increasing annual funding for Telefilm Canada by nearly 50 per cent a year” and to “review our national museums policy to make sure that people can access Canadian history across the country, with better access to digital collections.” It also talks about introducing “a new Cultural Diplomacy strategy.”

Of course, artists and arts workers don’t cast their votes solely on the basis of arts promises and platforms—a fact Cornell knows well, since she herself is very concerned, she says, about climate change, especially given incidences of flooding and shoreline erosion in the community where she lives, Scarborough Southwest.

“Overall, it’s a question of, What kind of Canada do you want to see in the next four years?” Cornell concludes. “I would encourage artists to continue to be leaders in their communities and remain connected to the issues that matter in their community.” And, of course, to vote.