Artist and secondary-market dealer says that 5% of an artwork’s price shouldn’t be too much to ask, or to give, to support a national art scene 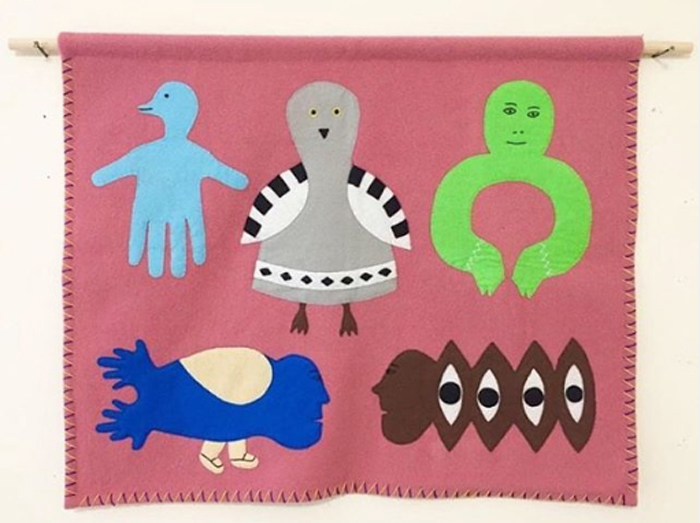 This felt hanging by Martha Haqpi went for $400 at the September 2019 Peter Estey auction. The artist's estate or the Baker Lake Co-op will receive $20 due to voluntary payment of a resale right.

This felt hanging by Martha Haqpi went for $400 at the September 2019 Peter Estey auction. The artist's estate or the Baker Lake Co-op will receive $20 due to voluntary payment of a resale right.

These amounts may not seem like much to a lot of art dealers and auction houses.

But they could mean a lot to artists when offered as a consistent resale right.

That’s exactly what artist Jay Isaac, who runs Peter Estey Fine Art—a small secondary-market dealer and auction house—is trying to show by paying out an artist resale right of 5% on his latest sale.

“My parents were antique dealers and auctioneers, so I’ve been involved with that part of the business since I was six,” says Isaac, who operates the Estey enterprise with fellow artist Caitlin Lapeña. “And I know as an artist I’ve sold some of my own pieces very cheaply in times when I’ve needed money—then seen them go for 50 times that amount in the secondary market.”

He adds: “Our mandate comes out of knowing what it is like to be an artist in Canada, and knowing that 5% is really a pittance for the most part,” relative to the amounts that major-market collectors and auction houses spend or generate overall, Isaac says.

That $15, for instance, is what Peter Estey Fine Art will pay to the Carl Beam estate as an artist resale right for a mixed-media work on paper that sold for $300 at the September 2019 Estey online auction. The $7.50 will go to artist Peter Powning for a $150 sale of a secondary-market raku vase. The $20 will go to the estate of Martha Haqpi or to the Baker Lake artist co-op following the sale of Haqpi’s felt wall hanging, which went for $400 last month. And the $5 will go to artist John MacGregor after one of his serigraphs sold for $100 at the auction.

“People have been talking about an artist resale right in Canada for 10 years or more,” says Isaac. “And as a small, artist-run business I have to say the idea of a policy is great, and the idea of a resale right becoming law is great—but sometimes I think that [lack of law] is used as an excuse not to move forward. People with money and power should really be doing this anyway.”

In May 2019, Parliament’s Standing Committee on Canadian Heritage recommended directly that the Government of Canada establish an artist resale right.

“Unlike writers and composers who collect royalties whenever their works are performed or published, visual artists only derive revenue from the initial sale of their work,” the Heritage Committee said in its report Shifting Paradigms.

In June 2019, though, Parliament’s Standing Committee on Industry, Science and Technology recommended only that the matter of an artist resale right be studied further before any action is taken.

Some artists’ organizations are hoping for more action in the short term, despite calls for further study.

The Canadian Arts Coalition, in its new election platform for 2019, highlighted the artist resale right as a key election issue, calling it “essential to the ability of literary and visual artists to be recognized and compensated for their contributions to Canadian culture.”

CARFAC and RAAV, two artist organizations which have long led advocacy for an artist resale right in Canada, took a more measured approach in their recent statements, looking to the next government for change: “We hope that, in light of the gaps in creators’ incomes identified by multiple stakeholders through these studies, that the Government of Canada will choose to open up the Copyright Act for legislative change in the next government mandate.”

What Art Dealers Have Said

The Art Dealers Association of Canada (ADAC) and the Contemporary Art Galleries Association (AGAC) have both made firm statements to parliamentary committees in recent years opposing an artist resale right.

“The truth is that introducing a resale right will weaken an already precarious market and penalize the vast majority of artists, because collectors will take fewer risks and pass young artists over, choosing instead to invest in a very small group of risk-free, already known artists,” AGAC told the Canadian Heritage committee in 2018.

ADAC echoed that in its statements to the Industry, Science and Technology committee in 2017, adding that “While this noble concept is indeed law in many countries, it exists more to level the playing field between trading partners than to benefit artists.… In most cases, the sole beneficiaries of significant ARR monies are the estates of a handful of wealthy artists.”

But it’s worth noting that not all art dealers are unsupportive of an artist resale right.

Gina Fafard, owner of Slate Fine Art Gallery in Regina, told the Standing Committee on Canadian Heritage that her late father, artist Joe Fafard, could have benefitted significantly from a resale right.

“Over the last 30 years, at least 20 artworks by Joe Fafard sold at auction, which would have been eligible for royalties,” Gina Fafard told Parliament in 2018. “The total price value of those works was $1.5 million. If he had the resale rights, he would have been paid almost $80,000 in royalties.”

It’s also worth noting that one of the academic studies submitted as evidence to both of the recent federal-government committees was led by an American academic who did not base his findings on markets in which Indigenous art and artists make up a large part.

Guy Rub of the University of Ohio, who has written repeatedly on the artist resale right internationally, teamed up with University of Toronto professor Ariel Katz, who specializes in competition law, intellectual property law and electronic commerce, to submit a brief stating that in the UK “the top 100 artists shared 80% of all royalties collected” under the ARR.

Contacted for further comment on the relevance of UK artist resale rights research to the Canadian situation, Rub told Canadian Art that “there are things that vary from country to country, but there are things that are shared among countries and among ecosystems—the short answer is, there are differences, but that’s also why there is the field of comparative legal studies.”

Meanwhile, an International Confederation of Societies of Authors and Composers (ICSAC) brief submitted to the Industry Committee indicated that “in Australia, between 2010 and 2015, 65% of the artists who benefited from the ARR were Indigenous.”

Back at Peter Estey Fine Art, Jay Isaac says he will keep the artist resale right going at his organization, no matter what Parliament decides.

“Artists are always the last people to get money out of these sorts of processes,” he says. He also hints: “It would be really nice to see one of the larger auction houses get this going, too.”

This article was updated on October 10, 2019, to include recognition of Peter Estey Fine Art co-director Caitlin Lapeña, who is also an artist.