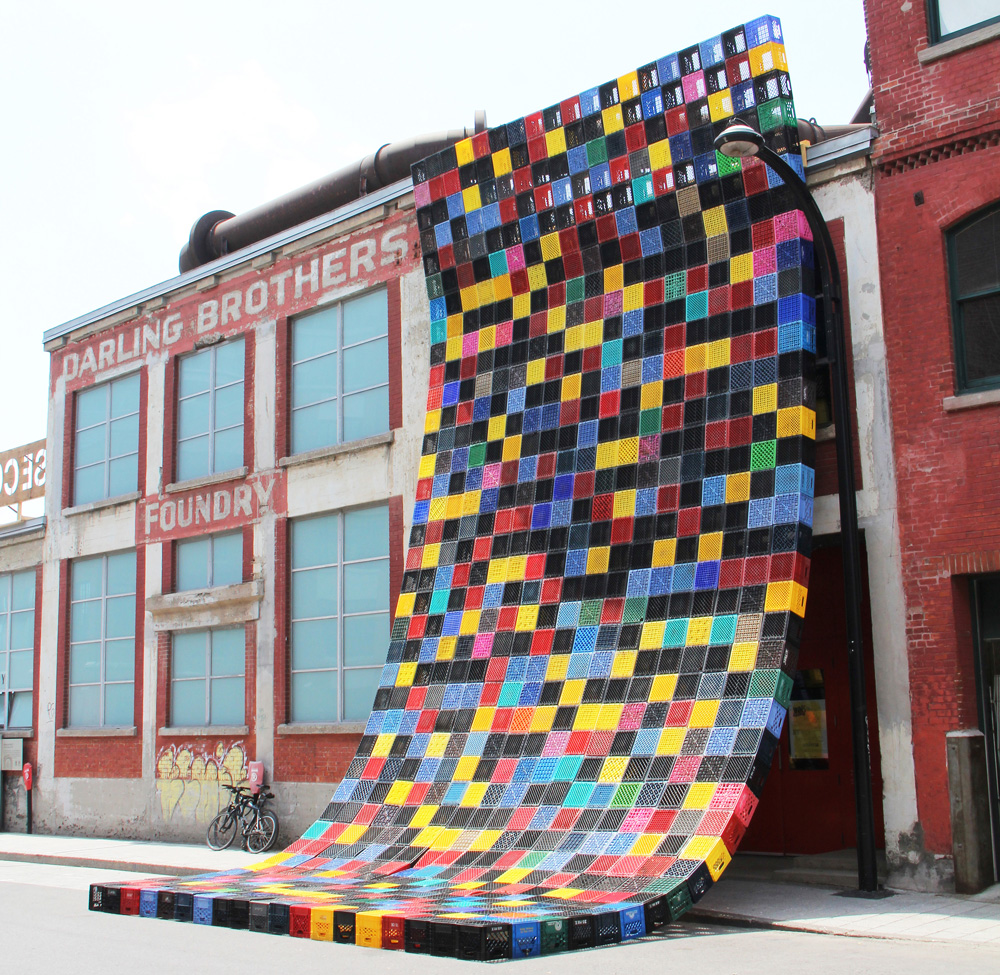 A closer view of Allard and Duchesneau's Courtepointe.

A film still from a work by Julie Favreau, winner of the Prix Pierre-Ayot for emerging Montreal artists.

A kinetic sculpture installation by Diane Landry, winner of the Bourse Jean-Paul Riopelle for artists with more than 20 years of professional practice.

A view of Courtepointe (Quilt), a large milk-crate installation by Philippe Allard and Justin Duchesneau. The duo won the Prix Art Public at Montreal's Gala des arts visuels.
A closer view of Allard and Duchesneau's Courtepointe.
A film still from a work by Julie Favreau, winner of the Prix Pierre-Ayot for emerging Montreal artists.
A kinetic sculpture installation by Diane Landry, winner of the Bourse Jean-Paul Riopelle for artists with more than 20 years of professional practice.
Stills from Diane Landry's Silence Radio (2008).

For decades, Montreal students have used milk crates to furnish their apartments and studios.

But, in the past few years, local artists Philippe Allard and Justin Duchesneau have brought that aesthetic into the big time with building-sized public installations of the colourful plastic cubes.

Tonight, Allard and Duchesneau’s creative use of this unexpected medium was recognized with the Prix Art Public at Montreal’s Gala des arts visuels, held at the historic Rialto Theatre.

Specifically, Allard and Duchesneau were honoured for their installation Courtepointe (Quilt), which was installed at Montreal’s Darling Foundry in 2012. Since that time, the duo has created similar public installations in Baie-Saint-Paul and Charlottetown—as well as large-scale structures crafted out of shipping pallets, among other projects.

Allard and Duchesneau were just two of the creators honoured at the Gala des arts visuels. In all, 17 prizes were awarded.

Among the other highlights were Julie Favreau‘s win of the Prix Pierre-Ayot, an emerging-artist award; Patrick Bernatchez‘s win of the Prix Louis-Comtois, which honours an artist who has distinguished themselves in the Montreal scene over the past 15 years; and Diane Landry‘s win of the Bourse Jean-Paul Riopelle, a provincial prize designed to provide support to an artist with more than 20 years of practice behind them.

On the curatorial front, Curator of the Year went to Vincent Bonin for the exhibition “D’un discours qui ne serait pas du semblant / Actors, Networks, Theories,” which took place at the Leonard & Bina Ellen Art Gallery in collaboration with Dazibao. This group exhibition looked at the way in which a body of theoretical texts by French philosophers were assimilated into Anglophone art milieus from the late 1970s to the present.

A special award also went to the iconic Françoise Sullivan for her pioneering work in sculpture, painting, dance, choreography and teaching.