A Conversation on Indigenous Youth and the Power of Art 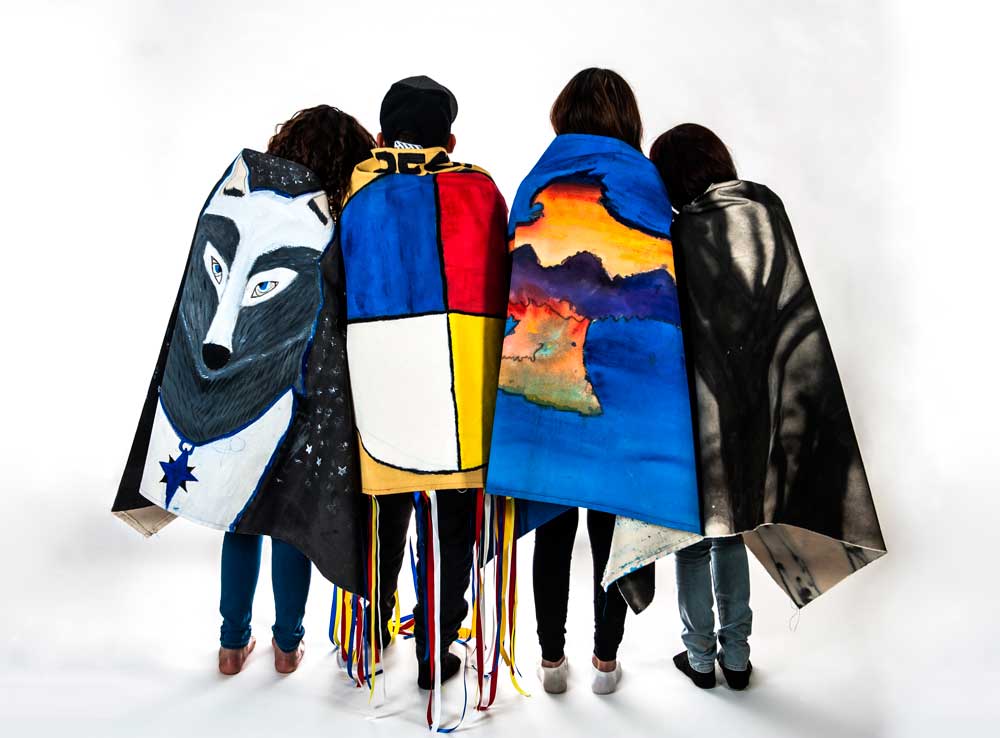 An image of works in The Shawls Project, 2016. Photo: Eric Kozakiewicz.

Last year, we had the privilege, as core members of Ociciwan Contemporary Art Collective, to work with artist Faye HeavyShield and the youth from the Edmonton-based Moving the Mountain educational program, which is geared towards so-called “high risk” youth and offers them a self-directed curriculum, rather than the conventional educational system (which these youth do not fit into).

Together, we worked on The Shawls Project, a community art project involving fancy dance shawls and audio soundscapes of Edmonton’s urban environment. The Shawls Project extended beyond the works that hung in a public installation this winter at Edmonton City Hall; this project was about process, decision-making, creating voice and giving space to the youth to discuss and reflect on missing and murdered Indigenous women and girls—an issue that deeply affected each of them.

As the youth worked diligently on their projects, we noticed deep explorations and diverse opinions these young women had about the extreme trauma, hardships and acts of survival they witness in their everyday lives—things that we, as a collective society, do not often encounter in our day-to-day lives.

Throughout this process, HeavyShield—the renowned Kanai/Blood sculptor, born in 1953, whose large-scale installations are in the National Gallery of Canada collection, among others—shared methods of working with youth through art programming. She gave insight on approaching sensitive projects, and shifting the focus from the end product to learning opportunities enabled through the process.

Here, HeavyShield discusses some of these insights, and how she approaches youth-based art practices. 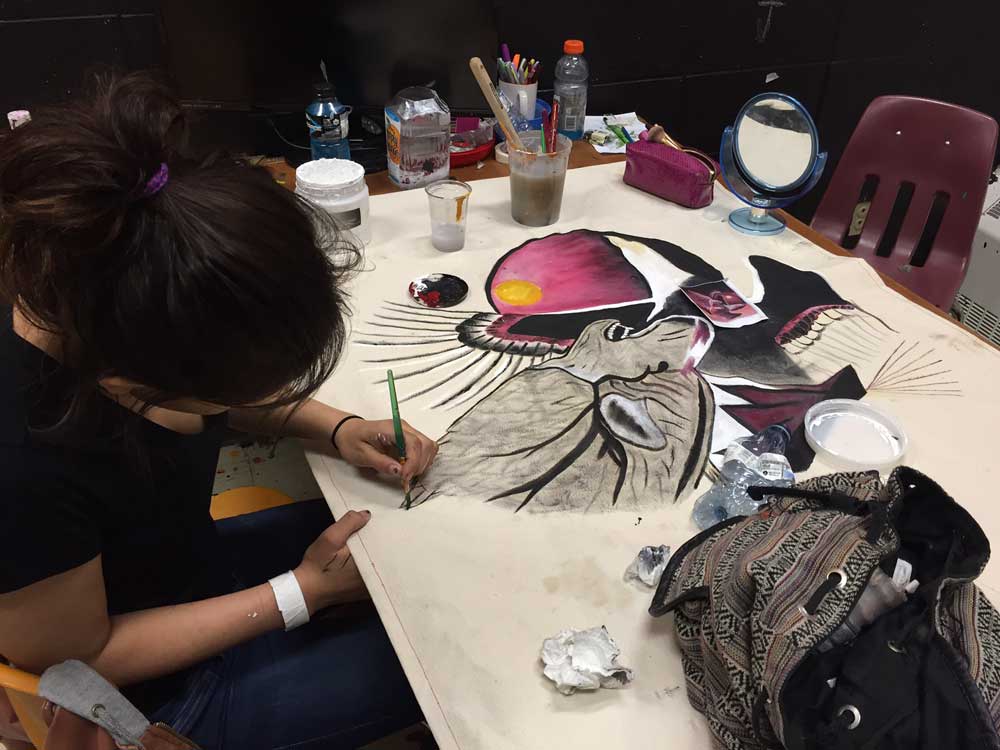 A view of a Moving the Mountain workshop during the process of The Shawls Project, 2016.

Becca Taylor: Can you talk a bit about the process and the steps you take when working with the youth?

Faye HeavyShield: It is not an organized process and I don’t think it can be, because each person you are working with is, first of all, unfamiliar with you, and second, is an individual. Aside from deciding on the basic format, you have to step back and work with as few limits or boundaries regarding the process as possible There is no reason to step in and limit the youth’s creativity and process, as their work is deeply personal.

BT: You did several things throughout the project to help the youth stay connected to the idea behind the shawls and make it more personal. For example, you had them put the shawls over their shoulders before they began to work with them. What were other techniques you used to help create an organic process that they could take on as their own?

FH: I didn’t really need to do anything to help them stay connected…asking them to wear the shawls was both about symbolic nature of the act and the physicality of the weight of the shawl.

Their stories are what kept them connected, and the fact that the program, Moving the Mountain, is where they go and where they meet—it’s their place. I’m there to listen to their stories, I’m their guest. They did not need to be led in any way because it was their experiences that drove them, not just their memory of their experience with tragedies. It was not about me or them doing the shawls, but about their losses. Nothing needed to be done to shape the work, it shaped itself.

BT: How did you approach communicating with the young women, especially working with them on their chosen focal point, murdered and missing Indigenous women and girls, which is a difficult topic?

FH: I don’t bring it up. When their art is in front of them, they are going to start talking…either about the materials or about where the idea comes from. “I’m using this or that…or this is who this is about.” Even then, I can’t say what I’m thinking, because it’s almost like you’ll scare that moment away. It is a matter of being there to listen and if they ask you something then you respond.

You always have to be gentle. If I approach them that means I’m putting myself forward. So I just stay in their periphery. It’s only after having seen me a few times before they become familiar with me. They have heard me talk and they have talked to me, but in a casual, conversational way. Each time they get a little more comfortable.

In many cultures, the sharing of food makes for comfort. That happened with the group. If there’s a bowl of fruit to eat, or we make fried bread together, then it’s not about “what happened to my mother…” When you smell the food you’ve helped prepare and when you’re sharing that food you feel relaxed and comfortable. 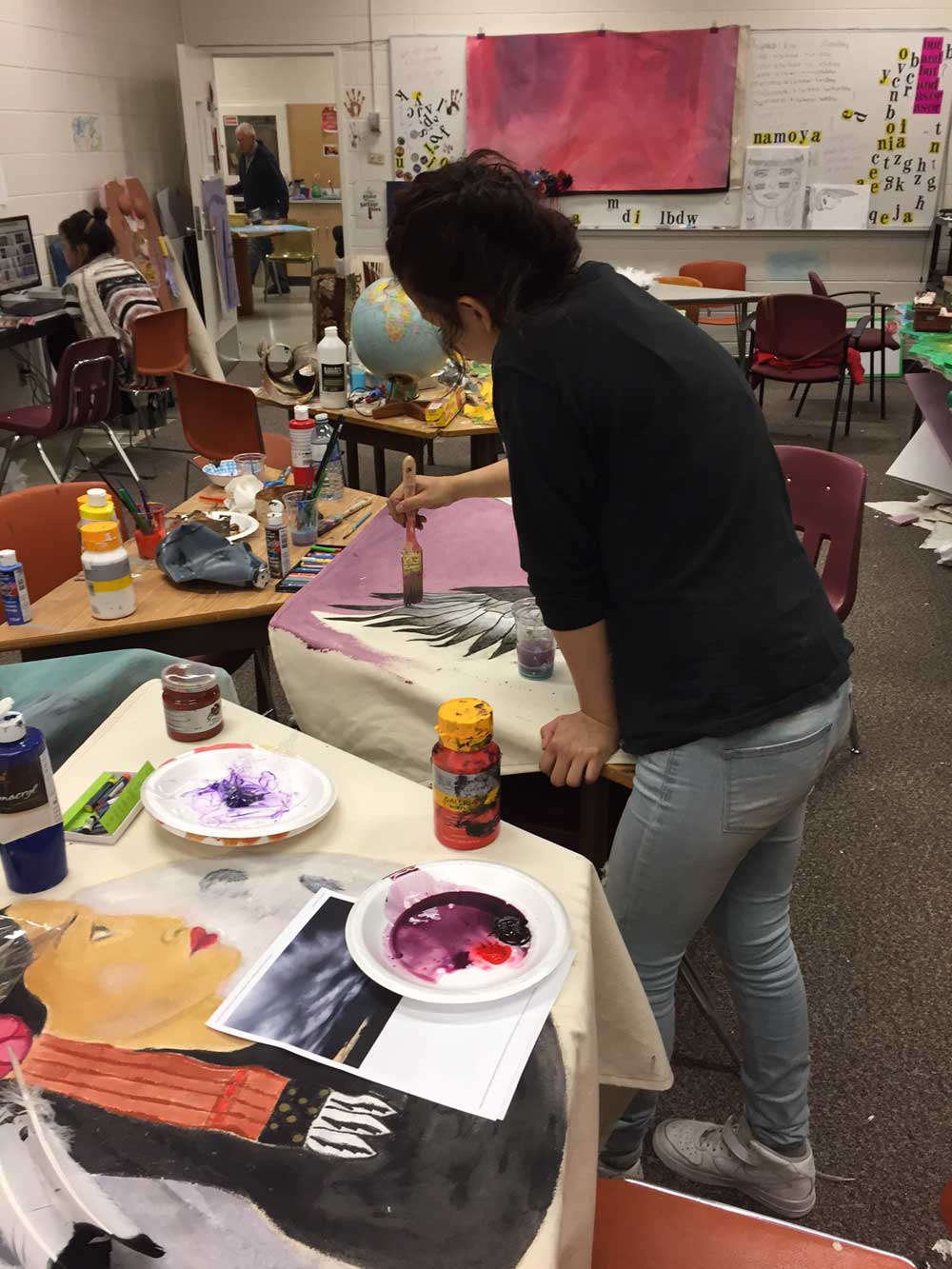 A view of a Moving the Mountain workshop during the process of The Shawls Project, 2016.

BT: The workshops were spaced out over three months to allow the youth time to work on the shawls independently. How did you feel about this? Do you feel you needed a stricter timeline?

FH: If you’re working in a high school, then it would have been a different, but these girls show up when they can. It is not for me to say, “You did not do enough,” or, “We have to get this done for this workshop.” That would not have worked in their current situations.

BT: You came in one weekend a month over those three months, so a lot of the work happened when you were away from the program. What did you think about when you came in at different points of the project?

FH: I was always impressed at the decisions they made and I think, overall, they were quick to make choices for their art. That’s what I learned in my training: you have to practice making decisions, that’s how you gain your confidence. I believed that it was important at the beginning of the project to let them know that any choice you make is yours. If you decide you do not want to follow through with it, paint over it, rip it off, cover it up and do what you need to do.

BT: So it becomes about process and nothing is set in stone. They have this ability to change and adapt within their comfort zone.

FH: That feeds your way of making art, when you’re not making a mark or stitch so precious. Just because you spent time on it does not mean you can’t delete it or cover it up. It’s like walking down the street. If you decide this is not where you want to be, you’re not going to stay there, you are going to change direction.

Tiffany Shaw Collinge: Along with the shawls you started collecting audio clips and sound clips. What was the process of collecting the clips and what did it mean to the project?

FH: That was a facet I wanted to have in the work [when it was installed at Edmonton City Hall]. When I would walk into the room, hear them talking, it was a room full of women. It made me happy because they sounded like little birds. They transmitted their voices onto the shawl through materials and I wanted that voice to be present aurally as well as visually.

The sounds, like sewing machines, people talking in the background, dishes clinking, music being played, the trip we took to the creek where you can hear the water flowing, are a more complete representation of what was taking place when they were all together.

TSC: You want this warm hum of process embedded into the exhibition. The story is much broader than the canvas you’re looking at.

FH: The shawls are two-dimensional, even with three-dimensional work done on them. I think adding sound adds dimension. Right from the start I let them know that these workshops were going to be based on shawls and that they could do whatever they wanted. It was not even the end of the day before some of the girls started talking about what they wanted to do. When you’re quiet and allow for their process to take shape, they start talking. 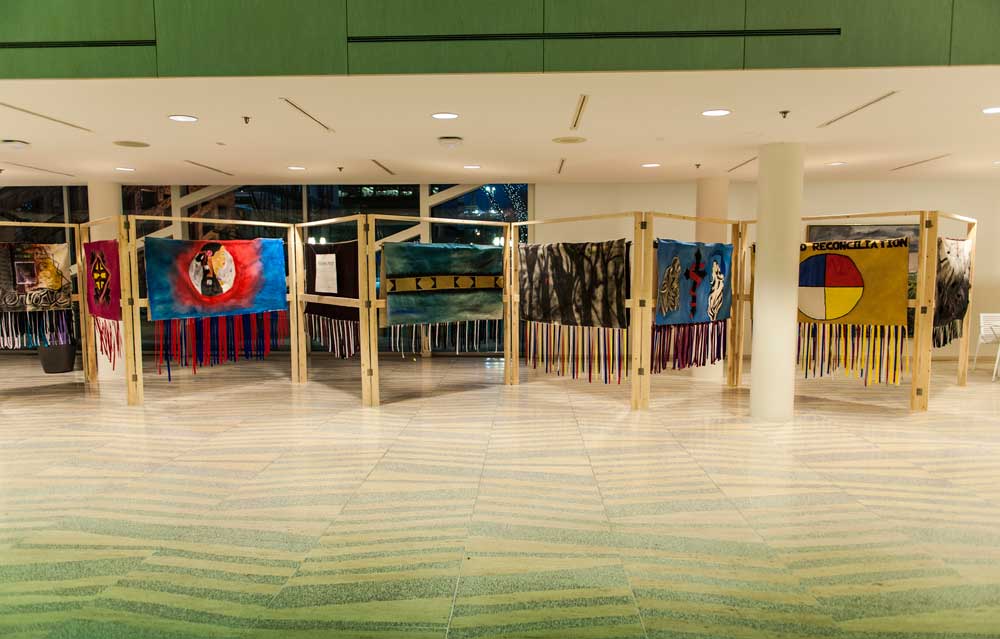 BT: They did not just work on the shawls. You have been in conversation with them about the installation and how they want things to be visually represented for them. Why did you feel that was an important part of the process?

FH: I thought it was important for them to experience every part of the art-making process. From the beginning to visiting the exhibition site [Edmonton City Hall] of the shawls, I spoke to them about how the work could be displayed, and how the space needed to be considered. I wanted them to know every part of that process I go through as an artist. Those decisions were theirs to make.

BT: I feel like a lot of programs try to talk for the youth, and I don’t think they credit the youths’ voice enough. How did you allow them to express their voices?

FH: Very basically, asking them what they would like. Same with this project; we decided to make fry bread one day, and another day we went to the river valley. It’s about choice. It’s also seeing that making art is not limited to paint or canvas or to the studio; it’s made present by all our senses.

TSC: I love the idea of you saying that the youth reminded you of birds or deer. There is this innocence about them, but at the same time they have a lot of knowledge and have been through so much.

FH: People used to come and hunt in the area by my mother’s place before I moved there a few years ago. After a time, we did not allow it anymore. Now, most times when we come back from town and it’s near dusk we see the deer and say, “…the teenagers are out,” and they’re there. Quietly grazing or running and jumping fences.

There is a vulnerability and a skittishness—and you respect that. You stay still and appreciate that you are privileged to witness it.

Becca Taylor is a multi-disciplinary artist, youth coordinator and curator with Cree, Scottish and Irish descent. She was recently the Aboriginal curator-in-residence at Urban Shaman, and is currently the Indigenous Curatorial Research Practicum at the Banff Centre.

Faye HeavyShield is an artist of the Blood Tribe and is a member of the Kainai Nation. She was born and raised on the Blood Reserve in Southern Alberta.

Tiffany Shaw-Collinge is an interdisciplinary artist, independent curator and intern architect based in Edmonton. She holds a BFA from NSCAD University, a Masters in Architecture from the Southern California Institute of Architecture (SCI-Arc) and is currently working at Manasc Isaac Architects.