Eduardo Ralickas: The Many Equivalences of Raymonde April 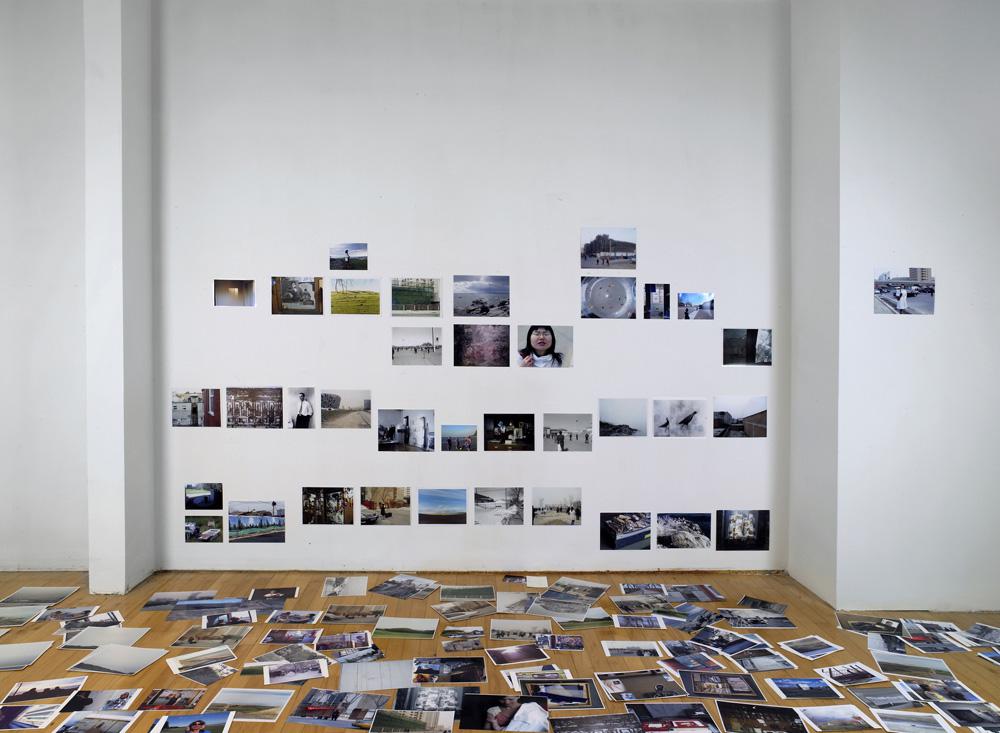 Since the late 1970s, Montreal artist Raymonde April has made a definitive study of the representational issues embedded in photographic image-making. From series of snapshot self-portraits to obsessive views of lived space, her work draws out the poetic structures hidden in everyday life, creating visual networks where the momentary transcends into the monumental. Now, that working process is at the centre of a group of Montreal exhibitions—hosted by Occurrence, Galerie Donald Browne and Les Territoires—collectively titled “Équivalences 1–4.” Here, curator Eduardo Ralickas chats with Canadian Art’s Bryne McLaughlin about April’s enduring practice, its relationship to language and the spatial strategies that shed new light on her working method.

Bryne McLaughlin: What initially drew you to April’s work and to thinking about this project?

Eduardo Ralickas: I’ve always admired Raymonde’s work. While a lot of curated shows have framed it in very original ways, there has always seemed to me to be something about language that is very specific and singular in her practice. I don’t think that has ever really been addressed.

So when I approached her with the idea, we started by speaking about how images create meaning. In her work she is creating meaning in the same way that language creates meaning—with structured systems where elements are purposefully opposed to one another…the whole Saussurian semiotics thing that was very popular in the 1970s. The difference is that she is doing this by establishing spatial relationships. In her photo installations, she is actually dealing with elements that make sense not only because they are opposed but because they are composed.

BM: What was her response? Was this linguistic relationship something she had considered?

ER: Raymonde is incredibly open to other people’s ideas. She’s very much influenced by literature, which comes back to the linguistic reading. I believe she originally considered photography not as a photographer but as someone who is very interested in language and in the plastic arts. When she started doing photographs in the 1970s she wasn’t really thinking about it as a photographer, she doesn’t come from the documentary tradition at all.

BM: Which again plays into what you’ve identified as her spatial interests…

ER: I think so. What’s interesting, too, is the way her work has been addressed with a lot of emphasis placed on her personal experience and on her life. It’s almost as if her images are a visual diary. Because the protagonists are staged in French there is this idea of the figurantes, or the extras in a cinema set, as she calls them. They are always in her series.

Approaching her work by means of language sidesteps that personal narrative issue a bit, because language is something that is shared by people. If she is doing work that can be compared to language, it means that she is doing something that has an identifiable structure. At the same time, this is paradoxical because it is a language that only she speaks. So a very interesting tension develops between the personal and something that’s more shared.

BM: Is there still a narrative to be spoken of? Or do you see the work in these exhibitions as purely structural devices?

ER: I think it’s a very fine balance of both. When we started putting the series together, we were ideally imagining three shows that would give you exactly the same experience, but with different images. Then the requisites of her practice would bring on a new challenge. Every time we would meet in her studio, she would re-sequence the series, add new images that would have to “balance”…she couldn’t betray her practice.

Going to each gallery, comparing and seeing where the images would or wouldn’t work vis-à-vis the other shows, allowed me, the viewer, to analyze how Raymonde’s signature style emerges. What are the choices she makes to make things balance on the wall? It ended up being a project about itself. That’s what I’ve called “method.” It was a project addressing its own method of creating a new project.

BM: Where do the images that she’s combining and recombining in these installations come from? Are these new photos or past works that haven’t been shown before? How does she begin to choose these combinations?

ER: It’s pretty impressive. When you walk into her studio she has a table with a massive archive of thousands of images in little boxes. Some of them are 8 x 10 and some of them are 5 x 7, but they’re just all there. She’s now working more and more with digital cameras, so she’ll also just have images on the computer. This project grew out of that archive, and I think most of it has been created in the past 10 years.

One image on view at Les Territoires was actually found in China in a flea market. It was a small photograph that she blew up. It looks like one of her previous black and white images from the 1980s. You see this image and you say, “That’s like an old Raymonde April.” It’s very uncanny.

BM: In these language structures, these sentences or phrasings that she is creating visually, is there a recurring pattern?

ER: There is a pattern, but it’s unpredictable. One of the things that drew me to think more about her work is the fact that there is a pattern. You can actually make a typology of all of her images. I don’t know how many categories you’d have, but they wouldn’t be very numerous.

For instance, you would have some with landscapes as a central element. She will make jokes and say, “Well, this is that kind of image that I do.” So she does work within certain more or less fixed parameters. But how does that work when you put them together on the wall? That’s very tricky because we had sequenced all of the images in her studio and then when we came to hang them in each of the different spaces everything had to change—we had to rethink the process from the beginning because of the space.

In the last show that we put up, which was at Occurrence, one wall was a bit smaller than we had predicted, so we had to take one image and either remove it from the series or place it differently. She was sitting at her computer and changing the sequence virtually to see if it would work or not. The solution turned out to be very simple but it really took a lot of time to get to. It’s not as predictable as you might expect.

BM: The exhibition is sited at three galleries, each with a specific installation. There is also one video piece included. You’ve noted that you set out to make three different shows linked by a common visual language. I’m wondering if, in the end, these works can be considered individually or if they depend on one another for an overall meaning?

ER: That’s a tricky question, and I don’t think there’s a really clear answer. All of the images are autonomous. She could definitely take an image from this show and use it again it in a future project. But at the same time, all of these images were carefully balanced within a singular series that is considered an autonomous whole. So in that way the work takes on a new dimension or status. Then each series was also balanced in accordance with the other two series and with the video. You do end up with a mutually defining process.

BM: And this comes back to your idea of the exhibitions as a study of April’s “method” as opposed to a standard gallery display of her works?

ER: Exactly. The video is very interesting, too. For many of the photographs in the show, she actually had a corresponding video clip, because she was using a digital camera with a video component. Sometimes she would photograph a scene and sometimes she would use video to capture it with a certain amount of time.

You could hypothetically create an entirely new series with video that would have equivalence with the other shows of still photography. But then video has its own language, the language of montage. It has its own structure and limits, so you have to work in a different way. It’s very interesting to see this video in light of seeing the other shows. You start to recognize an experience of déjà vu, but there is also something new happening because of sound and duration.

BM: What you’ve described is very much a collaborative exercise with April, who has a highly regarded practice and obviously a complex understanding of the work’s direction. How did you frame your role as curator?

ER: I have a background as an art historian, I’ve worked as an editor and I write a lot. But my main interest is research. I’ve never been interested in being a curator. When I came to Raymonde with this idea it was very spontaneous, but at the same time it was very honest. I said to her, “Look, I don’t know what curating is, but I think we’ll figure it out along the way.” That’s part of the reason I arrived at this conclusion about method. I realized that maybe curating is a way of stimulating the artist to reflect on the method. In that way, I think my role is like a foreign presence. There’s a certain amount of trust between the artist and that foreign presence which stimulates that artist to work otherwise.

Some curators have a concept or a historical notion that they want to demonstrate. Then they go and find the work for it. This case is different. We were approaching a practice and trying to find a way to speak about it that would not betray it but would show it in a new light. It’s a distinction that goes back to the 18th century. In his Critique of Judgment, Kant identifies two types of judgment: one is reflective and one is determining. The determining judgment says that you have a universal and you just have to find the things that fit within this category. Whereas reflective judgment means that you have a thing in the world and then you have to find a universal that goes with it, which is a whole other challenge.

All things considered, it was productive and it was unpredictable and that’s what was rewarding about this project. If it was as simple as, “We’re going to do this, here are the images and it’s finished,” it would have been pretty unidimensional. We haven’t asked all of the right questions about her work yet. But this is one way of asking some new questions, and I think with this project people are seeing Raymonde’s work in a different light.

An artist and curator talk with Raymonde April and Eduardo Ralickas takes place Friday, February 5, at 5pm at Les Territoires.