Dora García speaks with Bryne McLaughlin about “I SEE WORDS, I HEAR VOICES,” on view at the Power Plant in Toronto. 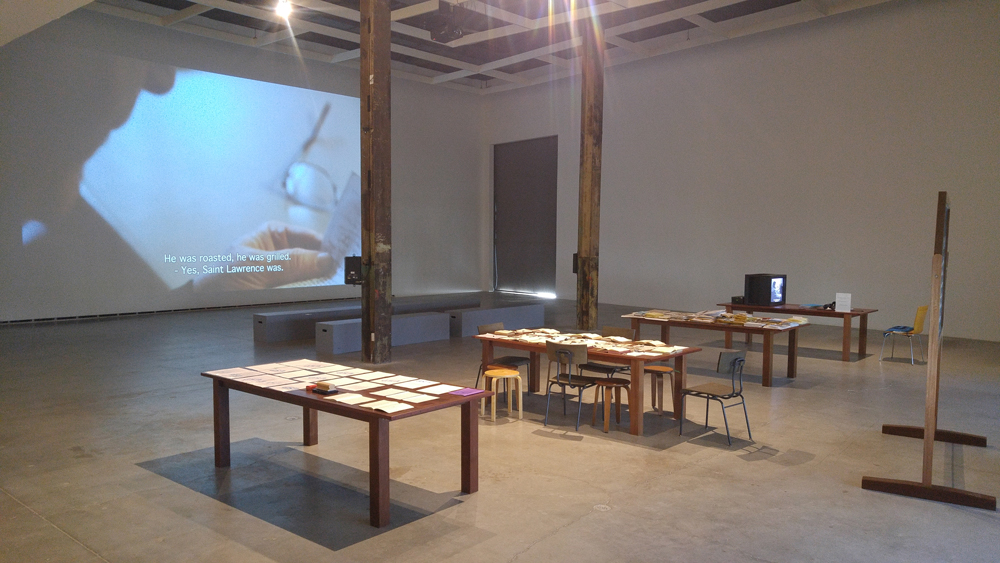 James Joyce’s Finnegans Wake has the dubious distinction of being one of the most unreadable standards of the Western literary canon. With its rambling dreamlike use of language and determined counter-narrative structure, the book—Joyce’s last and, in most expert views, definitive work—turned the conventions of writing, and the way we think about writing, completely on end. Indeed, Finnegans Wake is a book that was arguably never meant to be read, but to be experienced.

That’s a key point in Spanish artist Dora García’s “I SEE WORDS, I HEAR VOICES,” currently on view at the Power Plant in Toronto. Curated by Chantal Pontbriand, the exhibition is the culmination of a two-year cycle of exhibitions that focus on the inherent potential of language—no matter how marginal or abstract—to create community and resolve a deeper level of meaning. Earlier this week, Bryne McLaughlin caught up by email with García at home in Barcelona to discuss the exhibition, her fascination with Joyce and the delicate balance that language can strike between truth and the imagination.

Bryne McLaughlin: The centrepiece of your Power Plant exhibition is your 2013 film The Joycean Society, which depicts the members of the Zurich James Joyce Foundation as they analyze or unfold, word for word, a single page from Finnegans Wake—a process that they’ve been continuously working on, page by page, for more than three decades. You’ve said elsewhere that the film is only tangentially about Finnegans Wake, and that its central subject is its readers. Can you explain what initially drew you to Finnegans Wake and why this community of readers is so important?

Dora García: The first thing that drew me to Finnegans Wake is my enormous curiosity about the relation of Joyce with his readers. For whom is this book written? Why a writer spends 17 years—after the publication of the acclaimed novel Ulysses—in a book he must necessarily know is not going to be popular, and got warnings enough about that from his brother and his longtime supporter Ezra Pound? How could he be so convinced he had to do this, working 10 hours per day, unfailingly, while his family collapsed? Where is that faith coming from? A book as the most important thing of the world, something that sustains reality, something that needs to be done above everything else. The utmost importance of this book seems to be shared by its readers, spending 30 years to read a book again and again. And on top of that they seem to have a lot of fun reading it. For me this was a paradigm of the artwork and its relation to its audience.

BM: In watching the film, there is a definite sense that through their collective interpretation the readers are in a way “performing” the text. That relationship between language and performance is also key in the exhibition, whether in the group reading of Finnegans Wake that you recently organized at the Power Plant, or in the ongoing works ESP, which brings an expert in extrasensory perception into the gallery once a week, and Imposed Words/Palabras Impuestas, in which a performer sits in the gallery taking personal notes via headphones from a video of interviews with well-known South American authors. Even the “static” works in the show, like the Finnegans Wake reading table, Exhausted Books II, and the wall drawing Mad Marginal Charts #5, carry a palpable performative residue or charge. All of this happens in the public space of the gallery, yet for each work, there is something very personal, very intuitive, to the interaction. For you, what role does performance play as both a collective experience of the work and as a kind of interpretive doorway to a deeper personal meaning?

DG: I like to think of art spaces not as places where things are shown, identical to themselves from beginning to end, but rather as spaces where things happen. Because in an art space things are happening all the time, and life does not stop at the door of the museum or art gallery. I’d like to think of art places as continuums with non-art spaces, linked by the biography of people passing by both. Art is for me a state of things, a mode of awareness, not a special category of objects. Therefore I want to construct my exhibitions as places of life and happening, where there is a permanent feedback between visitor and work and among the works themselves.

BM: Another element of the exhibition is a growing archive of letters, postcards and packages you’ve received from artists and writers on the idea of exile, which viewers can sift through and read. It signifies a sense of “otherness” that runs through the exhibition, whether in the cryptic use of language and symbols, or the marginal communities of Joycean specialists or ESP experts, or viewers who are purposely balanced between observer and participant. How did this project begin and what has it (and the other work in the show) revealed to you about being on the outside?

DG: An important correction: I am not the receiver of the letters, they did not write them to me, they wrote them to the institutions where the work has been shown, more precisely to the responsible person running each of those institutions. By law, only that person, the addressee, is authorized to open the letters, and it is his/her decision to make them available to the audience or leave them unopened. Indeed the idea of exile is to create a distance and at the same time a bonding between the institution and the writers. The project began as my only possible answer to an exhibition in the museum of Tel Aviv where I was invited by my much-admired friend Steven Henry Madoff. I wanted to thematize the distance I felt to Israeli politics; I wanted to underline the desolate feeling about the situation there, how exiled I felt from it. A group of people started with the writing of letters to this museum, and the same structure, with new and added authors, has continued until today. I believe an artist is always an outsider; one needs to be out to be able to look in. There is always a feeling of longing towards the community but also a strong awareness that I am not part of it. But the outsiders form a community as well, of course.

BM: This cycle of works started in 2014 at the Darling Foundry in Montreal, and has travelled to Amsterdam, Hamburg, Madrid, Moss and Buenos Aires. “I SEE WORDS, I HEAR VOICES” is the final instalment. In all, it seems like an extended research project into how language, experience and meaning intersect in unexpected, almost superconscious, ways. How has the work and the exhibition changed or evolved over the course of the past two years? Have common themes emerged across geographies and cultures that you might not have otherwise predicted?

DG: “The Unconscious is the body pierced by language”—this sentence coming from Jacques Lacan’s Seminar xxiii, “Joyce Le Sinthome”—is present in all those exhibitions or projects, explicitly or latently. All through the different stops of this “train of thought,” I was just surprised at how people could congregate around that idea, how gladly people embraced otherness, other ways of thinking things, touching the visionary.

BM: What are you reading now?

DG: I am reading Clans of the Alphane Moon by Philip K. Dick.