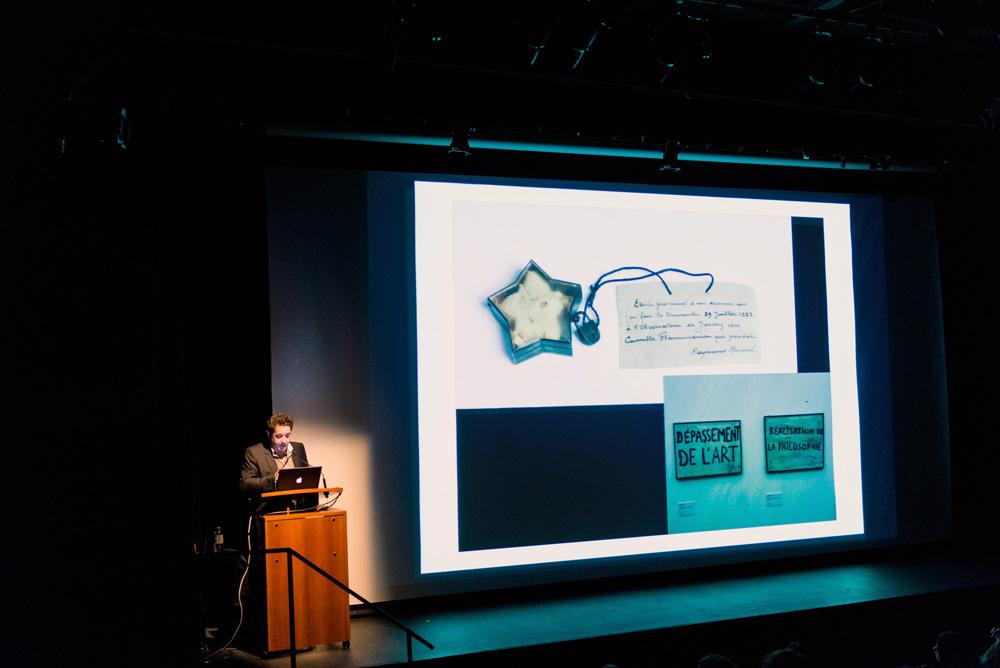 Jean de Loisy lecturing at Harbourfront Centre on November 8, 2012, and showing a research slide related to an exhibition at the Palais de Tokyo / photo Emma McIntyre

Last week, one of France’s leading proponents of contemporary art, Palais de Tokyo president Jean de Loisy, lectured at Harbourfront Centre in Toronto and at the National Gallery of Canada in Ottawa.

At the Toronto talk, presented by the Canadian Art Foundation International Speaker Series in collaboration with the Consulat général de France à Toronto and the Power Plant, Loisy spoke about some of the exhibitions he is working on for the future.

Among these projects is a show on “simple shapes” at Centre Pompidou-Metz that includes everything from boomerangs to Brancusi sculptures; a series of summer 2013 projects at the Palais de Tokyo and elsewhere that are based on an open call to curators under the age of 40; and a time-travelling survey at the Louvre that includes contemporary works like Geoffrey Farmer’s The Last Two Million Years alongside ancient artifacts and Inuit masks.

In between his Toronto and Ottawa talks, Loisy sat down with Canadian Art’s Leah Sandals to expand on some of these ideas. Here, he posits the most important job of the contemporary art institution, explains how art is the purest adventure left in our era, and discusses the teenage discovery that led him to where he is today.

Leah Sandals: You have worked in art institutions of various kinds since 1983. What is the most important job of an art museum or art institution, do you think?

Jean de Loisy: The most important job is to escape from the normal paths and to try to understand that the history of art is just one of the ways possible to look at art; outside of that, there are a lot of other things to discover. It’s to always try to be unconventional, to refuse the borders, to try to overpass all the limits of what art “should” be.

Most of the time, we have the idea that the evolution of art is going in one linear direction. In fact, what we have to take care of is all the art that goes in another direction—art that is far more interesting.

So that is the first big job for art institutions.

The second big job is that we have to preserve the direct relation between the public and the art. By this I mean that to try to transmit knowledge of an artwork to the public before they actually encounter it is a limit—it’s not an aperture.

We have to organize the information about an artwork or artist so that when the public visits your museum they can still be surprised and astonished, and so there can still be that kind of “wow” effect. Whether that effect comes from understanding the complexities of the world anew or whether it comes from a physical sensation of the work, that effect is still needed.

I note this because there is a kind of increasing mediation in art museums—this is very good, but only if it doesn’t prevent people from having their own words or experiences about the art.

I think it’s very important to have the possibility of accompaniment and information that goes with the art, but it should never come before the visitor’s actual relation to the art—it should always come after.

This balance between mediation of artworks and experience of artworks is probably one of the most complex things to develop and to organize in exhibitions.

LS: So how has the economic downturn in Europe affected your ability, or the Palais de Tokyo’s ability, to do the jobs you’ve just described?

JdL: Well, the economy at the moment is extremely difficult in Europe, as you know. At the Palais de Tokyo, we have to find more than 50 per cent of our $12 million budget by ourselves. It’s a lot to raise nowadays. Having to do this [kind of fundraising] is interesting, and, I think, modern in a way. But it is not so easy in France because there is no tradition of donation as you have in the Anglo-Saxon world.

There is another issue which I want to raise, though, that is very interesting. We know that in the past 10 years, attendance at French art institutions has increased by more than 50 per cent. But we also know that it’s only 10 per cent of the population that is visiting museums: even though there’s been an increase in visits, there hasn’t been a greater percentage of the population coming to visit the museum.

So there is a big question of development of this public who visit exhibitions and museums. It’s not only a question of quantity of public, it is a question of getting a person to visit an exhibition or a museum for the first time. We have to develop this.

On another aspect of the budget front, more and more corporations understand that to have a link with contemporary art is very important for them. Ten years ago, it was useful for French corporations to show that they were interested in patrimoine, 18th-century art, things like that. The heads of these corporations would have beautiful collections of art of this type. Now, they all have collections of 20th- or 21st-century art.

At the same time, it’s intriguing to see that the contemporary art market is going quite well, while markets for 17th- and 18th- century work, or for medieval art, receive little to no attention. Why is this? It’s very, very curious. Suddenly there is a feeling that only the present is important. I hope it means that people understand that artists are searchers—that they are investigating fields of knowledge and understandings of the world that are that are useful for the global situation.

LS: You mention the market for contemporary art; some people in the art world really dislike the art market. What is your feeling about the art market and its importance?

JdL: The term “the art market” covers a lot of activities that are very different.

In the art market, you have a lot of dealers who are exploring, who are pushing new situations, and that’s extremely interesting. I think that a lot of our museums are full now thanks to the art dealers who discovered—before curators did—a lot of artists we are showing now with pleasure.

So the art market is often doing a very brave work of discovery. This is interesting.

Granted, there are a few artists—20 or 30 in the world—for which there is a kind of panic around the work’s financial value. This is, in a way, very bad because it overshadows something which is naturally very free: to be a poet or an artist, which is a free activity of the mind.

LS: In your Toronto lecture, you talked about the role of the artist today, and how it has changed since the 1980s. Can you elaborate on this?

The questions that artists are working with now—speaking generally—are more questions of humanity, of anthropology, of social behaviours. And these questions concern all people, whether they are interested in art or not. It’s a dialogue not with the history of art, but with our lives, and art is more with our lives now than it has ever been before.

Also, we are in a moment right now in which there are very few adventures possible for a human being, whether it’s in science or geographic exploration or much else. And I think that one of the adventures that allows you to transform your mind most thoroughly is your relation to art; art always brings you to other universes or other ideas that transform your mind completely.

So I think, sincerely, that the purest adventure we can have is the one we can share with the artists. The artists give it to us, in fact.

LS: You said in your talk that you started working with art at the age of 18. What artist or artwork was most important to you at that time in terms of opening up a new world of exploration, or of propelling you to where you are today?

JdL: Well… what could I say that would be truthful here? I have invented so many responses for that type of question; I must be honest for once. Ha!

It has to be the moment in which I met Anish Kapoor. It was in 1979, I think. A few years before that, I had been travelling around France in an old car trying to meet as many artists as I could; I’d had the feeling that it was very crazy to live at the same moment as people who were, possibly, the Picassos of the day and not meet them. So I’d drive from town to town, talk to the director of the local art school for tips, and visit artists—many of them were bad artists, but I didn’t understand at that time who was bad and who was good, and I created my point of view through that.

The last thing that surprised me—and something I still live with—is that this artist was telling me about prehistoric art, about medieval art, about the art of Hinduism, and discussing them exactly as if they were of the present day. Why were mathematically invented shapes of the 19th century important for him? Why was it important for him to think that he is not in competition with the artists of his age, but with artists from prehistoric times? All this changed my mind, certainly.

LS: Your upcoming exhibitions on “simple shapes” at Centre Pompidou-Metz and on ancient and contemporary art at the Louvre certainly seem connected to this idea, don’t they?