Ahead of the AGO's exhibition "Jean-Michel Basquiat: Now's the Time," Buchhart discusses evaluating the late artist's work, and resisting his celebrity. 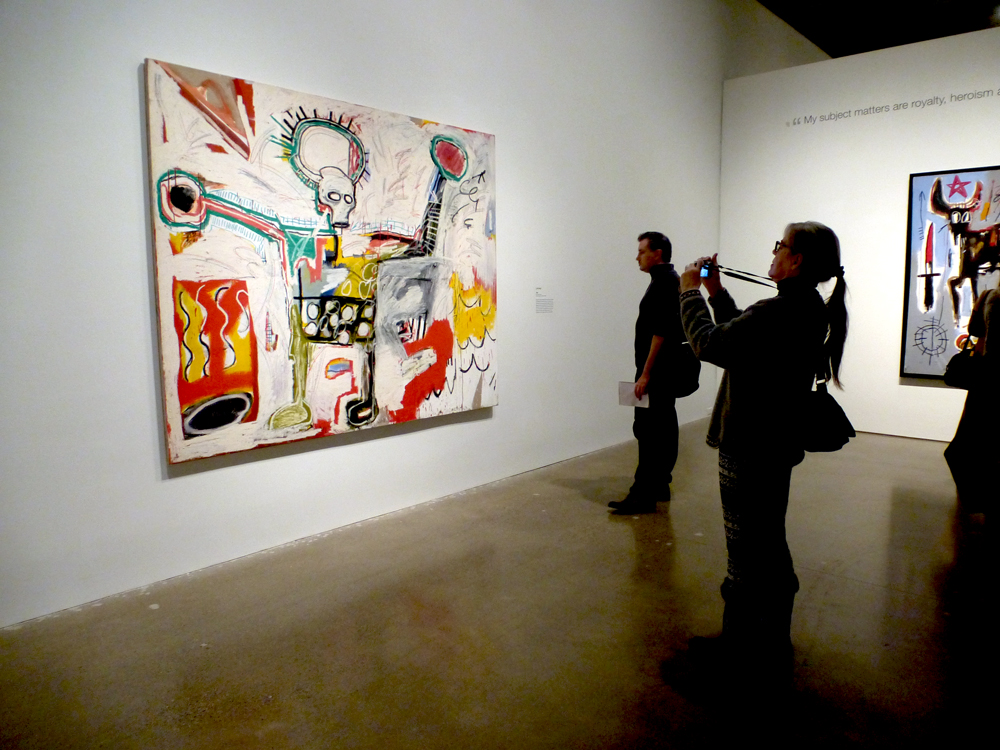 Jean-Michel Basquiat, Portrait of A One A.K.A Kings, 1982. Photo: Barbara Solowan.

At the press preview for the Art Gallery of Ontario’s new blockbuster exhibition, “Jean-Michel Basquiat: Now’s the Time,” breakdancers breakdanced in one of the galleries. Critics and reporters ambled around, drinking coffee and respectfully applauding when the dancers traded shifts.

In their remarks, director Matthew Teitelbaum and Austrian guest curator Dieter Buchhart underscored the thematic focus of the exhibition and its contemporary relevance, especially at a moment when police brutality towards unarmed black men is drawing public attention. In 1983, graffiti artist Michael Stewart, Basquiat’s friend and peer, was beaten unconscious by police after being seen spray painting in the subway. He died shortly thereafter; the 11 officers involved with his death were all white, and all acquitted. Buchhart explained that Stewart’s killing especially disturbed Basquiat because he recognized his own vulnerability—that he could have been Michael Stewart, that he was Michael Stewart. “We are all Michael Stewart,” Buchhart said.

The exhibition coincides with one of the AGO’s First Thursdays events tonight. Tickets are sold out, due largely to the headliner, legendary hip-hop artist Grandmaster Flash. “I didn’t know who he was,” laughed Teitelbaum. “But my kids finally think I’m cool.”

Caoimhe Morgan-Feir spoke with Buchhart during the press preview about evaluating Basquiat’s work—by theme and quality, given, inevitably, his perceived exploitation.

Caoimhe Morgan-Feir: This exhibition has been touted as the first thematic showing of Basquiat’s work, with nine themes delineating the works. I would like to get your perspective on this approach: what does it add to the work, and how does it differentiate this show from past retrospectives, such as those at the Gagosian Gallery or the Brooklyn Museum?

Dieter Buchhart: I’ve done the biggest retrospective myself, at the Fondation Beyeler in Basel and at the Musée d’Art Moderne de la Ville de Paris, which was a chronological retrospective. I felt that it is the time to do something other than a show like the Gagosian. The Gagosian exhibition was a pop show; there was no theme, no chronology, nothing. The curator was working like an artist; just putting works together because she thought it looked nice. The Brooklyn Museum show was like my other shows [in Basel and Paris]: chronological, mainly.

So, it is about time to really look into the contents of the work of Basquiat, and really see what he was trying to say, and what he was thinking about. I figured out certain groups of themes, and we are bringing them together to make a statement.

CMF: Do you think this thematic focus places less emphasis on his biography?

CMF: Basquiat worked in fairly prolific manner. He had a large output, and his works were often created quickly (with some exceptions). Looking at this extensive body of work, what makes a good Basquiat painting? How do you look and decide what is strong and representative of his work, as opposed to something that was more rushed?

There are many really good works by Basquiat, more than you would think. To characterize the essence of the painting, I would say the line is always consistently there—the unique line. The works are much more drawings than paintings.

So, the line either finishes the work up, or the line is the work itself. Words, pictograms, icons, all make his art.

And then, at a certain time, he also layers over layers, and erasing content was part of his strategy—crossing out words, painting over motifs. Painting over was more or less most of what he did on a painting. Some of his friends described coming to his studio, seeing the most fantastic work, and then next day they came again and it was just overpainted.

So I would say the intensity of the work and the working process visualizes itself in the work itself. I’m looking for something particular in the work. There is a drawing with one sentence, that’s all. That was as important for Basquiat as a piece like Untitled (1981), which he worked for half a year on.

So, I’m searching for the essence. What he would see as the essence of his works, contextualized in art history.

CMF: There is a perception of Basquiat as an artist who was exploited and mistreated by the art world. Because of this he is a difficult artist to handle in a retrospective: how do you discuss and share his work, while being mindful of that history and legacy? Was this a concern for you?

DB: No, it was not a concern because the work is so unbelievably strong by itself. People who don’t see that don’t look at the work. It’s pretty simple. It has something to say, like a Warhol, like a de Kooning, like a Bacon—it has something to say that is not speculation.

CMF: So you see the strengths of the work overriding concerns about legacy?