Quebec trio BGL catch up with Bryne McLaughlin on their installation at Art Toronto, their plans for Venice and their budding relationship with Bonhomme. 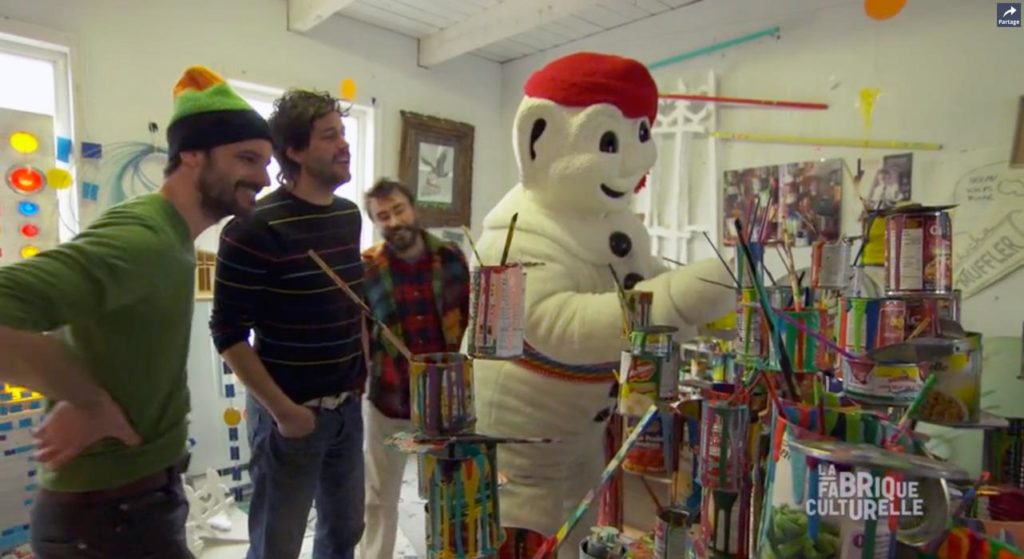 Bonhomme Carnaval in Venice? Anything is possible with the arrival of Quebec City trio Jasmin Bilodeau, Sébastien Giguère and Nicolas Laverdière—better known as the artist collective BGL—at the Canada Pavilion for the 2015 Venice Biennale. To get a taste for their wry, merrymaking brand of art in the meantime, Art Toronto crowds can take a ride on their mobile sculpture Canada de fantaisie/Canada Fancy, which is featured as a special installation at this year’s fair. And while it might still be early days to speculate on what or who might make an appearance in the Giardini next summer, BGL has a few unexpected secrets to share in this phone interview with Bryne McLaughlin—including the title of their Venice project, and its structure.

Bryne McLaughlin: Hello. Are you all there?

BGL: No, we are two. We are a duo and the genius is making the show.

BM: So you two handle the media?

BGL: Yeah, for sure! I can say that you are lucky because we are just looking for time to be in the studio as much as we can but it’s been difficult.

BM: Okay. Tell me what the plan is for your installation at Art Toronto.

BGL: The plan is that the art fair offered the National Gallery of Canada [the organizer for the Canada Pavilion in Venice] a big space to show a sculpture from BGL. Then we thought it could be a nice place for our carousel sculpture, Canada de fantaisie/Canada Fancy. We don’t have many pieces to show in a small room. This sculpture is big and it also has a great energy.

BM: This is a version of the work you first showed in the “Oh, Canada” exhibition at MASS MoCA in 2012—it’s something like a large merry-go-round made from steel fences with seats that viewers can sit down on and take a ride?

BGL: Yes. It’s made from old lampposts that were originally on the Champlain Bridge in Montreal. Usually when we present this project we want to fake that these fences were attached to the lampposts by crazy protestors—or maybe it’s better to say “creative” protestors. So the real way it functions is that we cut the lampposts and there is a part that can turn on itself. But if you don’t take the time to analyze it, you have the illusion that it really turns around the lamppost. It’s not motorized; it’s just mechanical. Usually we push it ourselves; you just push one person and everything moves at the same time. It’s very smooth.

We have two different carousels. There is another one we did that can accept six people at the same time. It’s stronger, and bigger. We did it for Nuit Blanche in Calgary and it toured to different cities in Canada. The one we’re showing at Art Toronto is more fragile; I would say maybe a bit more “artistic” because we did some work on the exterior. From the middle of our body to the top of the lamppost, everything is rust. Not fake rust, but rust that we controlled. All the parts from the middle of our body to the ground is all silver. This effect is very nice.

BM: How many people can ride on it at once?

BGL: Four slim people [laughs]. This one is a bit fragile, but there’s nothing dangerous to it, we promise!

BM: The opening of the Venice Biennale isn’t until May 9, 2015, but it must be hard not to constantly think of the work ahead. How are you preparing now for the Venice project?

BGL: Venice still has lots of organization ahead for us. But it’s growing slowly. For example, Quebec City just gave us a studio for free, in an old fire hall. So that’s super exciting. We’ve started to build a full-scale reproduction of the Canada Pavilion in there.

BM: Now that we’re talking about Venice, let’s feed the rumour mill a bit. What kind of secrets can you reveal about your plans for the Canada Pavilion?

For now there is only one door [laughs]. But you never know… It’s a totally natural division. It’s like…I don’t know…you have the introduction, then you have the meal, then you have the conclusion. And here’s your news scoop: the title of the show will be “Canadassimo.”

BM: Okay. I’m thinking there might be a hint, too, in the visit from Bonhomme Carnaval to your studio for [the Télé-Québec television show] La fabrique culturelle. I’m not sure how many people have seen the video online or even know about it. Is this the real Bonhomme? How did you manage to get him to your studio?

BGL: Yeah. He’s one of four real Bonhommes. To answer your question quickly, we have a friend who works for Télé-Québec and he received money to produce a series of videos on the Internet where you discover the “fabric” of Quebec culture. That friend called us and said, “Guys, I have a contract and I would love to do something on you, but I don’t want to do an interview.” Coincidentally, just a week before, Jasmin had a beer with friends and one of them reminded him that he has a very good contact with Bonhomme. So we used the contact.

It worked, and he came to our small studio, and that’s what you see. I would say, for us, the sad part from it is that we had so much fun with him, but you don’t see that in the video. He had a series of jokes that were hilarious, but they decided not to put them in the video.

BGL: Well, you know, he’s always the optimist. He always sees something good; cold is good! And then he talked about his sexuality. He was joking about it. He was saying to us that he wasn’t monogamous or polygamous but he was “bonogamous”…he likes other Bonhommes…wow!

BM: It’s possible that this is more of a scoop than the exhibition title in Venice.

BGL: You’re right! Then when he went outside the studio, there were people all over the street. You don’t see them in the video but everyone knows Bonhomme in Quebec City. I think Bonhomme is kind of popular in Toronto, too? Whenever we meet people in Toronto and we say we come from Quebec City, one out of two times, they ask us about Bonhomme.

BM: So did you make a contract with him for Venice?

BGL: No. It’s too bad. Maybe we could do a fake one for Venice? A cardboard one…. People will say, “Hey! It’s Bonhomme!” Why not?!