What Berlin Can Teach Us

If Canadians want to build urban artistic hotspots they should look to Berlin’s flexible city planning and use of existing spaces, argues Alex Bowron. 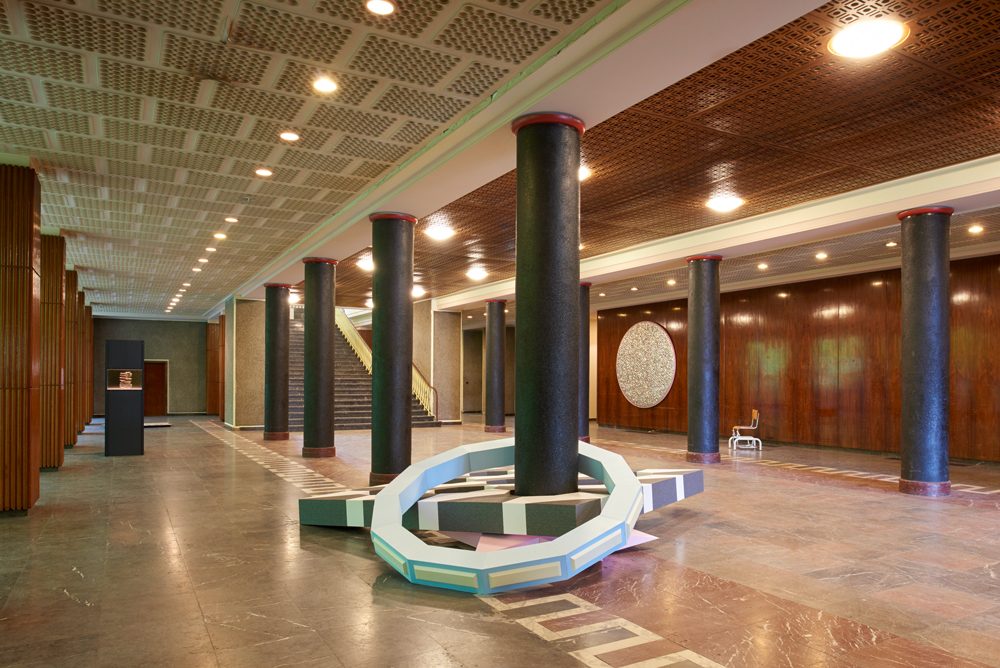 Arno Brandlhuber, Florian Hertweck and Thomas Mayfried, Dialogic City 3, 2014. At Berlinische Galerie as a part of STADT/BILD (Image of a City).

In May 2014, as part of the European parliamentary election, the city-state of Berlin held a referendum on proposed developments for 750 acres of open parkland at the site of the former Tempelhof Airport. At roughly the size of New York’s Central Park and just as primly located, Tempelhof Feld is a wide-open field occupied by running, picnicking and kite-flying Berliners. Despite the plan’s claim to include a public library and at least some measure of affordable housing, almost 65% of voters opted to keep the park exactly as is. The vote did not express a rejection of change, but a refusal to allow it to go unchecked. With a population of 3.5 million that grows by approximately 50,000 new citizens a year, close to one third of the city’s area is made up of public greenspace—the most of any European city.

But Berlin is a city of contrasts, and permeating every park is a healthy dose of urban grit and grime. The German capital balances its hereditary tendencies towards cleanliness and order with an encouragement of all things wild and free. For every shiny, new piece of innovative contemporary architecture, there is a mixed-use, retrofit housing co-op covered in a layer of colourful graffiti. For every beer and drug-fuelled all-night street party, there is a tram that arrives precisely on schedule. Berlin is refreshingly confident and endlessly nuanced. Pre- and post-war, capitalism and socialism, flexibility and control are all stitched together into the urban environment.

Although Berlin is certainly not immune to the homogenizing and exclusionary effects of gentrification, it remains an impressively affordable city with a relative abundance of available space. Along with the diversity of its social and cultural surroundings, available and accessible real estate sustains the city’s reputation as a bastion for creative living. Currently, more than 400 galleries, 150 non-commercial art spaces and 20,000 working artists call Berlin their home. The number and nature of art and artists in Berlin is directly related to city’s physical makeup: the fall of the Berlin wall in 1989 triggered an initial emptying out of the city’s formerly Soviet-occupied eastern side and freed up huge amounts of residential, commercial and industrial space. Artists, drawn to the possibilities of this sudden availability, were among the first to occupy the formerly East Berlin neighbourhoods of Prenzlauerberg and Friedrichshain, while at the same time, former West Berlin neighbourhoods of Kreutzberg and Neukölln experienced a creative jolt. Although admittedly changed by their increased popularity, these areas are among the most attractive for any working artist in the world. Not only is it possible to actually be an artist in Berlin, but Berlin can make you feel, without even a hint of irony, that anything is possible.

A recent trip to the city’s annual Berlin Art Week made it even clearer to me that the city—its structural elements, historical composition and new developments—is a central focus of the Berlin artworld. One of the week’s main events was a city-sponsored joint initiative between four of Berlin’s leading art institutions titled STADT/BILD (Image of a City). Three exhibitions and one series of public performances conceptualized the city as a living organism that operates as a unique and constantly changing zone for creative living.

The idea that the city both affects and is affected by its citizens was widely addressed within STADT/BILD. The collaboration between city and citizens is woven in to Berlin city life; there’s no wonder that it should play a significant role in the art community as well. Even Art Berlin Contemporary (ABC), the main art fair of the event, issued statements that outlined its conscious resistance to the traditional grid format. ABC chose instead to construct itself in an “alternative” or “organic” manner to “more accurately reflect the nature of the city as a whole.” This conscious rejection of white-cube approaches and insistence on highlighting the city’s existing physicality is unusually flexible and responsive for an international art fair.

As Berlin continues to offer its unique blend of desirability and accessibility, Berlin artists continue to make the most of it. Several art spaces currently have inspired creative projects that couldn’t be possible anywhere else. The KINDL Center for Contemporary Art, located in Berlin’s Neukölln neighbourhood, is a 60,000-square-foot former brewery originally built in the German Expressionist style in the late 1920s. With a grand opening scheduled for autumn 2016, KINDL already hosts exhibitions and performances in its 66-foot ceiling boiler room. Once complete, the complex will feature three floors of exhibition space, a literature cafe and an outdoor beer garden. The project intends to “combine a sense of tradition and history with new directions in architecture.”

Similarly monumental and equally impressive is the broadcasting station of the former GDR: Funkhaus Berlin. Located on 10 acres of land in the eastern district of Oberschöneweide, Funkhaus is a Soviet-Bauhaus complex that functions as an exhibition and event space and houses numerous recording and artist studios. During Berlin Art Week, Funkhaus hosted an independently curated site-specific group show of 40 international artists that aimed to “establish a dialogue between the selected artists’ works and the architectural peculiarities of the former broadcasting center.” The effect was spectacular, with large-scale Modernist-style sculptures wrapped around structural columns, video pieces leaning against walls and tucked away in dark corners and sound installations filling the once-opulent and still incredibly spacious recording rooms.

This adaptation of existing space is Berlin’s expertise. With a built environment that functions as an ever-changing map of its own unique story, the city is the master of its own dérive, tracing and retracing aesthetic contours to unveil the markings of the past while perpetually merging them with the contemporary. The city speaks the language of its residents and its residents respond intuitively, with the expectation that they will not only be heard, but also understood. Canada’s urban environment and its developers would do well to pay attention to such a mutually beneficial relationship. Despite the differences in our respective histories, Canadian cities are by no means void of underused infrastructure that bears the potential for new life. Berlin’s viability as a city for artists has everything to do with its commitment to reconstruct and rearrange. It genuinely recognizes that artists require not only time but also space in order to work.

If Canada wants to successfully nurture our growing population of contemporary artists, we can start by making use of what we’ve already got. Artists are excellent adapters. They are also very good at actually seeing what is around them. We can take a cue from Berlin and recognize that, when it comes to the urban built environment, history can offer plenty to the present. We do not need to tear down old structures and neighbourhoods to make room for the new; we need to be patient and allow the new to grow organically out of the old. This kind of growth, of course, is impossible to sustain without significant financial investment. But if we don’t continue to support our artists through the increased availability of government grants, subsidies and progressive social policies including rent control, we risk losing them to cities that they can afford.