Shellie Zhang Recovers Spectral Traces from a Diasporic Past 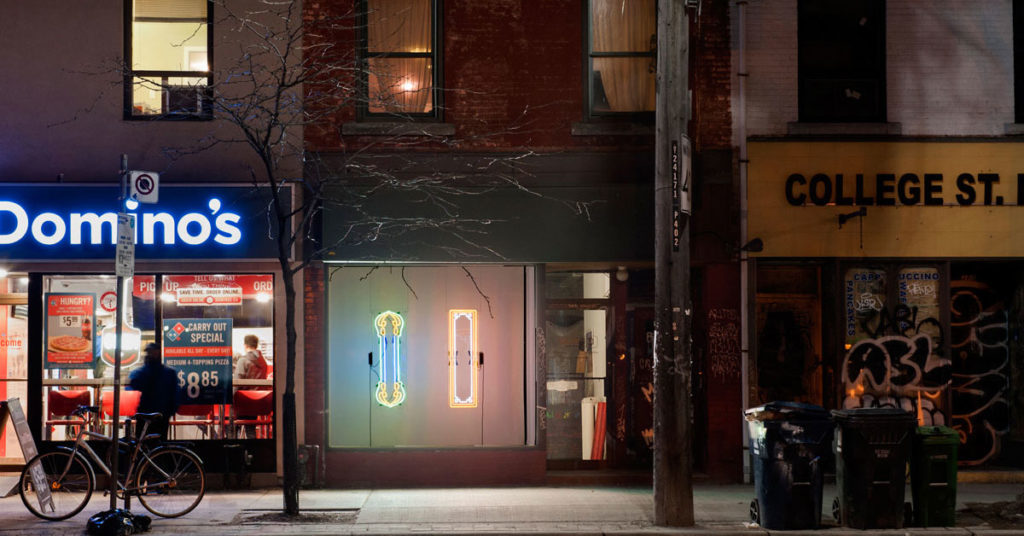 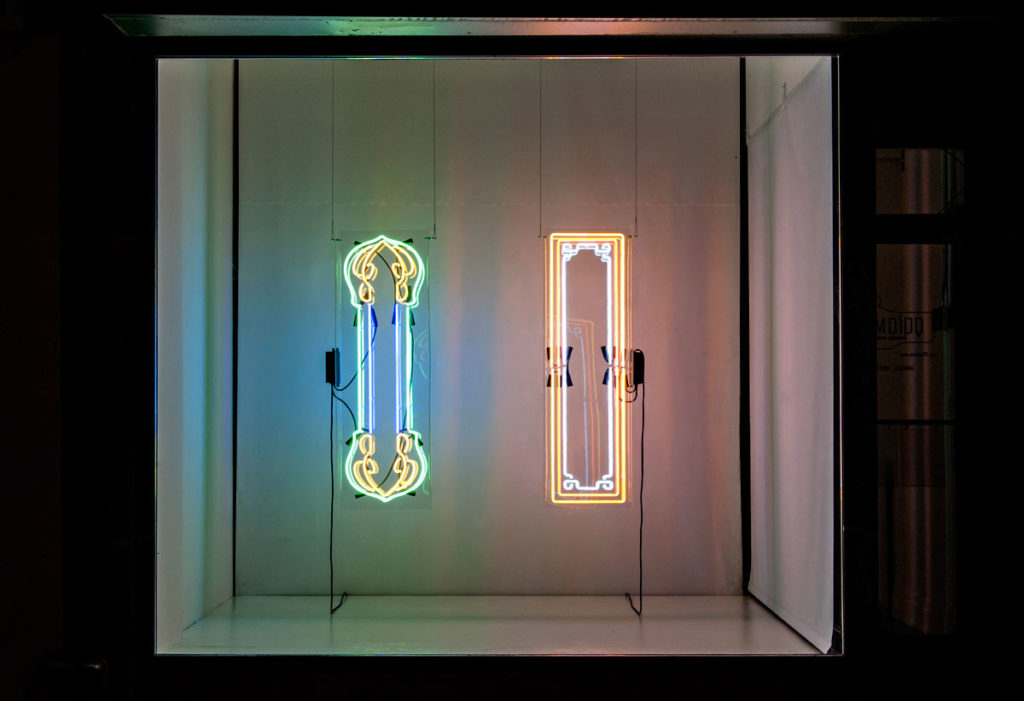 The Rexall drugstore on Dundas and Spadina in Toronto is relatively new, though the building it occupies is almost a century old. Few know about the abandoned theatre that lies above the chain-drugstore, the central topic referred to in the title of Shellie Zhang’s new neon installation A Place for Wholesome Amusement at FENTSTER, a gallery in the storefront window of Jewish community hub Makom.

In the FENTSTER window, against a white backdrop, two emblems of Jewish and Chinese architectural iconography are illuminated next to each other in bright commercial neon. The installation represents reimagined marquees for the Standard Theatre and the Golden Harvest Theatre, former occupants of 285 Spadina, the building currently home to the Rexall. The design of the installations emerged from her process of mining the Ontario Jewish Archives and discovering parallel histories between the Jewish and Chinese communities that occupied the building at different times in history.

In the beat of the street lamps, graffiti and other neon lights, Zhang’s marquees intervene in the psychogeography of the neighbourhood, revealing the palimpsest to which they and all the textures of the street belong. At night they are particularly spectacular as they glow with the same luminescence of other neon signs in the windows of neighbouring businesses. By virtue of FENTSTER’s storefront window gallery, A Place for Wholesome Amusement speaks in the same visual grammar of the streetscape with a somewhat familiar vernacular, albeit from somewhere forgotten. The bright, coded colours and Art Nouveau shapes perform a type of urban anachronism, feigning a contemporaneity in neon all the while appearing as ghostly vestiges belonging to spaces of the past.

In the installation, a green, yellow, and blue candle that appears to burn on both ends radiates next to a rectangular, Asian-detailed column in electric orange, white and red. In their illumination, these neon lights can’t help but dispel the amnesia clouding the overlooked racism responsible for Toronto’s “ethnic enclaves”–enclaves that, ironically, are often celebrated as signs of Canadian multiculturalism. The neighbourhood in which 285 Spadina is situated, formed as an offshoot of the notorious St John’s Ward, the city’s first immigrant ghetto in the 19th century. The district was a cosmopolitan milieu, home to the entrepreneurial Black community as well as newly arrived Italian, Jewish and Chinese immigrants. As much as it was a burgeoning metropolis, the economic life and social mobility of the non-Anglo immigrants of the Ward were subject to discriminatory policies and normalized racism. By the 1960s, the neighbourhood was largely demolished for the construction of the new City Hall and Nathan Phillips Square. The displaced Chinese relocated just a few blocks west to become neighbours, once again, with the Jewish community that had established the Standard Theatre in 1921.

Over the course of its history, the Standard Theatre underwent various name changes and transformations from its “wholesome” beginnings as Toronto’s first Yiddish playhouse in the 1920s: into a movie theatre, place of burlesque, and then a venue for punk bands and community dance recitals. In 1975, the Hong Kong–based motion picture studio Golden Harvest acquired the building and began screening legendary Kung Fu films starring the likes of Bruce Lee and Jackie Chan, targeted to the growing Chinese audience in Canada.

While Zhang’s neon rendition of the Standard Theatre’s marquee is based on a historical drawing, the design used to represent the Golden Harvest marquee is completely imaginary. By way of this speculation, Zhang also invites us to imagine what social dynamic may have existed within the spatial overlapping of cultures. What can be suggested in the social spaces where Chinese family clan associations formed nearby to where Jewish labour unions were established? Zhang’s playful invention of the Golden Harvest Theatre’s marquee gestures towards what she describes as “a new hope” for future practices of remembering and rethinking “the silos” of the past, the ways in which institutional archives can sometimes produce cultural histories isolated from one another. In this space beyond the residual is a form of collaborative remembering, a narratology shaped by the resilience of past cultural texts and the desire for future pluralistic frameworks. Side by side, the two marquees, in their proximity, propose a kind of kinship, a way to engage in a cross-cultural collective memory.

As I view A Place For Wholesome Amusement at night, a passerby takes a picture on her phone without stopping. I steal a peripheral glimpse of the picture. The neon light lingers across the screen in the direction of her movement towards 285 Spadina, just a few blocks south-east of FENTSTER. I am compelled to follow in that direction, as if following spectral traces captured by an iPhone. I imagine myself traveling with a multitude of other footsteps, a collection of singularities from the past and present all intersecting at 285 Spadina. In this choir of walking, the loudest are the diasporic ones, the ones that have likely stepped out from the window of FENTSTER to follow me down the street. Walking to announce our presence, we tread across the city to define the paths of our everydayness, the spaces of social life, and the places of self-articulated “otherness.” In front of the Rexall, the store lights project a blinding sterile whiteness. Our walking ends. The third storey of the building recedes into obscurity against the night sky.

According to Zhang, the cinema remains intact but unused since the Golden Harvest Theatre closed its doors in 1994. Access, she explains, is nearly impossible, hermetically sealed in the bureaucracy of offshore real estate agents. In its abandonment, the forgotten cinema of 285 Spadina becomes home to a different “other,” as the choir of footsteps begins to echo with an eerie resonance. An abandoned cinema sets the perfect stage for a haunting, a sense of space enunciated by wandering ghosts. But the desire of the living to enter, to simply be present and walk around an empty room, produces the opposite effect: a sense of being haunted by a space one can no longer access.

Annie Wong is a multidisciplinary artist and writer based in Toronto.

In this second instalment of a two-part series, artists, culture workers and community organizers from across the country discuss how they are supporting their communities, demonstrating solidarity and combatting racism and microaggressions 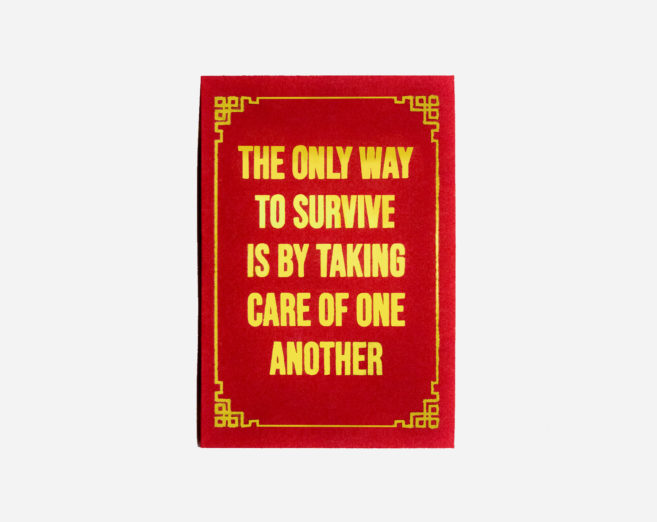 10 Artists Who Use Pleasure to Defy and Subvert

Body alteration, boyfriend tees, and beaded cushions are some of the mediums they work with