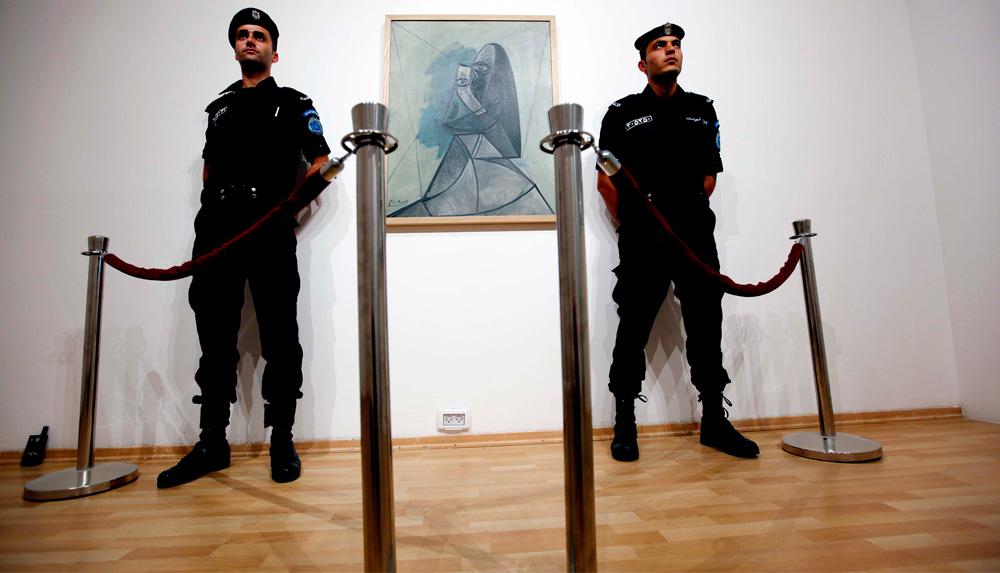 How do you bring a masterpiece into a war zone? As Khaled Hourani has learned, the answer is very carefully, and very slowly. In 2011, Hourani, arts director of the International Academy of Art Palestine in Ramallah, managed to exhibit Picasso’s Buste de Femme (1943) from the Netherlands’ Van Abbemuseum on site at the institution.

The story of how that exhibition came to be is chronicled in the documentary Picasso in Palestine, which showed at Documenta 13 last year and is having its North American premiere February 21 at the Reel Artists Film Festival in Toronto. Here, Hourani—also director of the film and an artist and critic in his own right—talks with Canadian Art about border issues, popular commentary and who the Picasso of Palestine might be.

Canadian Art: Why did you want to bring Picasso to Palestine?

Khaled Hourani: In any art project, the important thing is to share and to witness.

We have a situation in Palestine in general, and it’s a very special situation, since in my view, we don’t have a state.

I was thinking about how art could be shown in such a complicated situation.

In a way, we have two governments, we have lots of policemen, and we have lots of customs officers. We have everything like that, but we don’t have a border, or at least borders that are firm.

So I wanted to look at those things through an artwork and the checkpoints it comes through.

CA: What was the greatest obstacle in making the project happen?

KH: The greatest obstacle was what I described above. How do you bring an artwork into a war zone?

Normally this kind of artwork is supposed to go between two states that have clear borders, and it might normally take five months for that, from a museum to a museum.

In our situation, you couldn’t guarantee the safety of the artwork. So that was also an obstacle. It was not possible to insure the work 100 percent.

And it took two years, rather than five months, to get the artwork from Eindhoven to Ramallah.

CA: And why was it important to you to make a film about the exhibition?

KH: Because “Picasso in Palestine” was not just about the exhibition itself. It was always about the journey and the trip, how from A to Z we managed to bring Picasso to Ramallah.

The film is made by Rashid Masharawi, a good friend of mine. I invited him from the beginning to make documentation of the whole process.

One thing I liked was that the film showed how many people worked on the project. The project would not have been possible without at least 100 people who were involved. There were a lot of efforts from a lot of different people.

Now, following the project, I only have the documentation, which is some films and catalogues. The film was also shown as part of Documenta 13 in Kassel last year.

CA: In the film, some Palestinians are asked what they think about a Picasso coming to Palestine, and they say they don’t care, and that they would rather attention was focused on their political concerns. What is your response to those kinds of comments?

KH: For me, it is like if you a throw a stone into a lake of silent water, then witness how the waves go around. All I was just hoping was to see a reaction.

Also, those questions were posed at a political demonstration that was happening in Ramallah.

In general, the Palestinian response was very generous. We had 6,000 people visit the exhibit—which was just one artwork of Picasso’s—in 24 days. It’s a big audience for one painting in Ramallah.

CA: And who would you say is the Picasso of Palestine? What Palestinian artist do you think should be known worldwide?

KH: If you want one name, I would say Sliman Mansour. He’s of an older generation now, but he still uses a very contemporary language.

When you are talking about the representation of women in art in general, Sliman Mansour could be example of using women as a metaphor to represent homeland and to represent identity—all of these kinds of symbols. Women in wartime are often the first victims, and Sliman has also brought out that kind of aspect.

For me, the first time I saw the Picasso work we brought to Ramallah—Buste de Femme of 1943—it actually reminded me of one of Mansour’s works of the 1970s.

CA: What is next for you?

KH: After doing a huge project like bringing Picasso to Palestine, I feel less confident and less sure about what I am doing. I have to go back to start from zero, to be honest.

So I’ve started doing small projects—not big projects like the Picasso one.

When I visited a village in the north of Syria recently—I went there with a group of many artists—I videotaped a barber who was giving me a haircut.

I might also do a presentation in Ramallah a week from now showing some videos and images from that Syria trip. I guess I will have to think about it.

CA: Is there anything else you’d like people to know about Picasso in Palestine or your upcoming projects?

KH: Well, one thing is that we still have the small museum in the art academy in Ramallah, the space that we built for the “Picasso in Palestine” exhibition.

Now that space is empty, and it’s available to other artists. It’s humidity-controlled and temperature-controlled.

To me, the empty space is an artwork by itself. I’m also interested in inviting artists from around the world to start thinking of doing something else in this room.