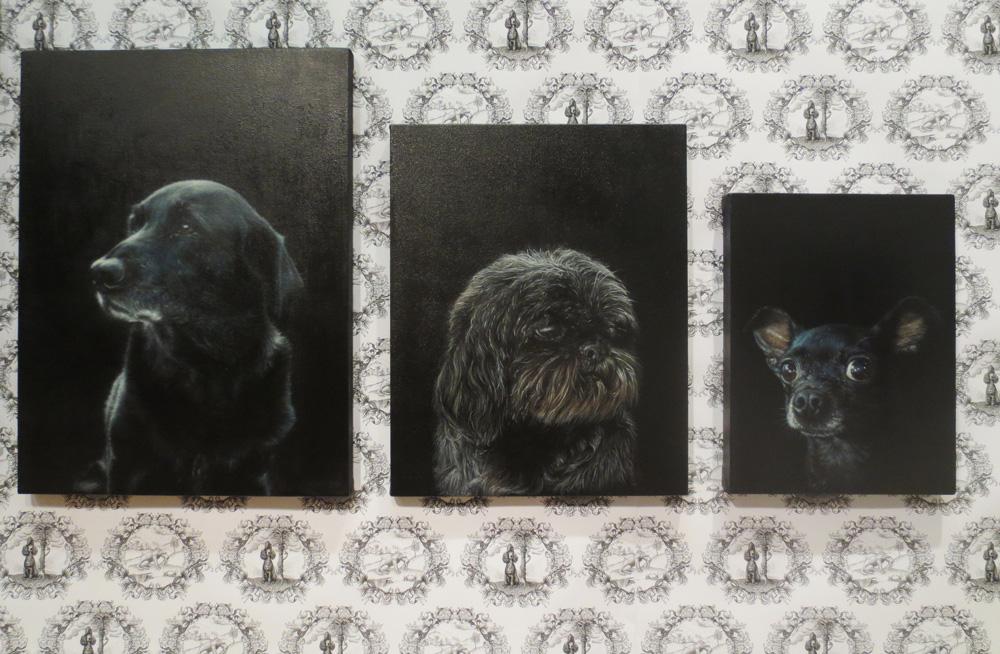 From the Upper East Side to the Bowery, Canadian artists and galleries had a strong showing at last week’s art fairs in New York.

Canada’s presence was strongest at the Volta fair with six dealers presenting mainly new works by a single artist. Toronto’s Clint Roenisch featured a series of photographs, sculptures and a charming suite of comedia dell arte-inspired figurative ink drawings by Tony Romano. “The title of the series, Pigro, means ‘lazy’ or ‘an idler,'” explained Roenisch. “So, the drawings depict artists looking for ways to avoid making work.” The booth’s centrepiece was an intriguing composition of vaguely anthropomorphic sculptures titled The Tear at the Party, its titled derived from a droplet-shaped gouge beneath the “eye hole” of the arrangement’s largest piece. (Work by another of Roenisch’s artists, Niall McClelland, was included in the Spring/Break show down in the Bowery; two large kaleidoscopic stain pieces, which he makes using punctured CMYK printer cartridges and heavy Japanese paper, dominated the room in which they were shown.)

Montreal’s Pierre-François Ouellette art contemporain presented work by one of the gallery’s newest artists, John Player, who is currently completing an MFA at Concordia. Nine oil-on-canvas paintings in a range of sizes and a set of nine deft watercolours examined surveillance culture. Several took a drone’s-eye view of the landscape.”It’s as if the surveillance is also being watched,” explained gallery coordinator Edward Maloney. “John sources his images from the Internet in the same way [fellow Canadian] Jon Rafman does, but he then translates the technology back into the traditional medium of paint.”

Upstairs at Volta, Toronto- and New York-based Katharine Mulherin presented a crowd-pleasing series of seven skillfully rendered portraits of dogs (and three cats) by Michael Caines. Referencing 17th-century Dutch portrait painting, the works were displayed against wallpaper featuring landscape scenes, also featuring dogs, drawn by the artist, making the booth feel like a small salon. (Caines’s next show at Mulherin’s Toronto space in May, he says, will feature more felines.)

How women have been traditionally represented by male artists informed two large paintings by Natalie Reis at the booth of Montreal’s Galerie Trois Points. Parasitic Virgin and Odalisque Back Side (both 2008), based on Caravaggio’s Death of the Virgin (c. 1601–6) and Ingres’s Grande Odalisque (1814) respectively, conveyed the feminist undertones that often inform Reis’s work. In her more recent work, such as the large, two-panel Happy Endings (2014), Reis is exploring what she calls “open narratives.” “A phrase like ‘happy endings’ is ambiguous,” she says. “It can be read as a literal happy ending, like in a movie. Or, it might refer to that other ‘happy ending’—the kind a guy might receive at a massage parlour. Meaning depends on the viewer.” (Reis’s current show at the gallery, “Compendium,” runs until March 29.)

For its second year at Volta, Ottawa’s Patrick Mikhail Gallery presented new abstract paintings by Jennifer Lefort, the first extensive showing of her work in the U.S. The gallery also took the opportunity to debut smaller oil-on-canvas works that radiated the same loose and playful energy of the larger paintings. “When you’re showing your work at home, you don’t talk to people about it,” says Lefort. “Everyone knows you, so you talk about other things. But here, people don’t know me, so they want to talk about the work. The conversations have been very motivating, and make me want to rush right back into the studio.” A positive response to Lefort’s work even came from the Wall Street Journal, which featured one of her paintings in its coverage of the fairs.

At the booth of Toronto’s Angell Gallery, viewers were hit with the smell of still-drying paint wafting from the thickly layered surfaces of Kim Dorland‘s paintings. “Kim wanted to make a series of paintings that were more personal than the work produced for his recent McMichael Collection show,” explains gallery manager Joey Chiu. Hanging on the back wall of the gallery’s booth were 18 portraits of the artist’s wife in Dorland’s trademark Fauvist colour palette, a handful of which had been snapped up only one day into the fair.

Other Canadian artists spotted at Volta were Toronto’s Bobby Mathieson and Thrush Holmes, represented by New York galleries Lyons Wier and Mike Weiss, respectively. Mathieson, who shares a similar painterly aesthetic with Dorland, bases his paintings on found images in popular culture that he reworks until they become his own. A brightly coloured riff on Ozzy Osbourne’s Blizzard of Ozz album cover suggests that Mathieson could become a painter to watch. Meanwhile, Holmes conflated ancient Egypt with the early-80s iteration of New York’s new-wave Pyramid dance club, lining the booth’s walls with six large canvases combining spraypainted outlines of figures suggestive of ancient frescoes with neon. An amusing sculpture of a turntable made of neon tubing and a tree stump punctuated the installation.

No Canadian galleries participated in the Armory Show this year; however, Canadian artist Scott Treleaven was featured by New York’s Invisible-Exports in a special section of the fair that focused on notable emerging galleries. An interesting series of untitled mixed media abstractions on paper and board were something of a surprise coming from an artist some know best for figurative photo-based collage; however, upon close looking, collage elements emerge from beneath the layers of paint. Burbling away softly in the middle of the booth was a cool tabletop-scaled sculpture-cum-fountain that referenced Modernist design.

Over at the Scope fair, which took place at the grand, but decommissioned, New York Post Office building, Toronto’s Birch Contemporary was an island of restrained and thoughtfully conceptual work among the sea of graffiti- and street-inspired art and kitschy assemblage. A reconfigured work by Jaan Poldaas, begun in 1978, consisted of a grid of coloured rectangles, with the paint colours mainly found in different aspects of municipal life in Toronto. (These included panels subtitled Blue after AGO, Maroon after TTC, and Red after Toronto Hydro.) A suite of abstract works on paper by the London, UK-based Canadian Shaan Syed, which explore his Islamic background, were hung adjacent. Birch also took the opportunity to debut the gallery’s newest artist, David Hanes. A recent OCAD grad, Hanes presented minimalist but light-filled dye-sublimation prints on polyester fabric. (Hanes’s first show at Birch will take place during the Scotiabank Contact Photography Festival in May.)

Jannick Deslauriers‘s light-as-air hand-sewn sculptures of hand tools—a staple gun, a saw, a wrench—at the booth of Montreal’s Art Mûr were also a welcome sight at Scope. Made from lace and tulle, with stray threads left untrimmed, Deslauriers’s work cleverly usurps traditional notions of what constitutes the feminine versus the masculine. In contrast to these works were two large, dayglo-coloured paintings of architectural forms by Nicolas Grenier that felt utopian and ominous at the same time, and a Pop-inflected sculpture of a rainbow emerging from a black “oil slick” by Patrick Bérubé.

Those needing a break from the bustle of the fairs could visit Sotheby’s hushed Upper East Side galleries and see a fine selection of mid-20th-century Canadian abstraction. The works, which came from private Canadian, American and European collections or from the artists directly, provided a crash-course in the artists affliated with the Automatistes, the Plasticiens and the Painters Eleven. Any pretence that Canadian art is only about landscape painting was immediately stripped away by one of Claude Tousignant‘s large Accélérateur chromatique tondo paintings located at the top of the escalators leading to the exhibition. Highlights included a marvellous baby-blue sculpture by Françoise Sullivan (Untitled,1967), an energetic abstract canvas, Le Huitième Jour (1963) by Charles Gagnon, gem-like paintings by Borduas, Ferron and Molinari from the 1950s, and an enormous Riopelle canvas, Forestine (1954), that possesses a beautifully dark inner glow. “There has been a lot of interest in the work and, yes, works have sold,” said Sotheby’s representative Mark Buck. “But, part of the arrangement with the consignors is that we don’t reveal what did and did not sell.” (Though we did learn that one of the Tousignants was among the works sold.)