Ken Lum on Canada vs. the USA

Artist Ken Lum, who now lives in Philadelphia, reflects on the differences between the Canadian and American art identities and art markets. 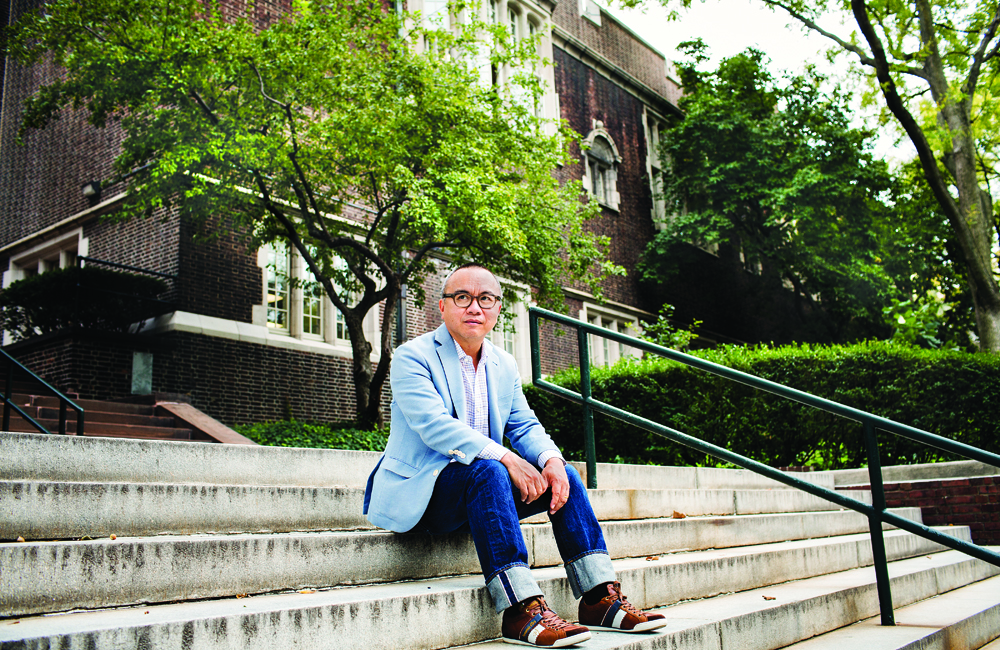 Ken Lum on the steps of Weightman Hall at the University of Pennsylvania, Philadelphia, September 2015. Photo: Stephanie Noritz.

July 2015 marked my fourth year in the Philadelphia area. I continue to adjust to the differences that make life in the United States so vastly distinctive from life in Canada. These differences have much to do with the ways that many Americans and Canadians see themselves and their places in the world. I have found life to be more socially atomized in the United States and this atomization produces paradoxically strong yearnings for community. The frequency of vociferous outrage can be seen as an expression of these yearnings, as exemplified by the Black Lives Matter, Occupy and Tea Party movements.

Earlier this summer, I co-curated a large public-art and urban research project titled Monument Lab: Creative Speculations for Philadelphia. The monthlong project took place in the courtyard of Philadelphia’s iconic city hall, where members of the public were invited to propose speculative monuments that they felt were needed at this point in time in the city. I encountered many Philadelphians who passionately described traumatic events that have marked this city and are hardly ever spoken about in more official channels. I met an elderly African American man who was unable to read or write but remembered in remarkable detail the MOVE bombing that occurred in West Philadelphia 30 years ago. Monument Lab showed me that it is possible to inaugurate many things in America (including an ambitious and even potentially contentious project that took up a good part of the public courtyard of City Hall). Yet the project also revealed how utterly impossible life is for so many here.

It is the impossibility of life and the impossibility to speak the unspeakable that is the central dialectic of American art. This is not to say that artists here are not tackling meaningful societal concerns. They are. But the laws of an American way of life are deeply entrenched. To wit: this year, I discovered that I no longer had a right to vote in the Canadian federal election, a development that is shocking to me. I believe such a confiscation of a basic right could not happen so blithely in the United States. Despite this entrenchment, there is still space (albeit small) within contemporary art for the expression of views that challenge sacrosanct beliefs. I would argue that it is the opposite case in Canada, where the idea of art as social critique is more pronounced, in part because it is what is expected of art. I feel that this is true also for Canadian non-objective painting, which cannot exist without a critical discourse of its right to be. At the risk of extracting essences from a complex situation, contemporary art in America is allowed (or rather expected) to exist without qualifiers or provisions. A work of art can just be. Of course, this has been a point of contention in American art since Abstract Expressionism. Contemporary art in America exists as in a western movie landscape: empty, lawless, simultaneously ahistorical and trans-historical, a repository for unanchored expressions and anxieties.

After three years in Philadelphia, I have come to a realization: I may have left Canada, but Canada has never left me. I am not referring entirely to affection but also to some degree of disaffection in terms of certain memories that distress me. I make about three or four trips back to Canada a year and the success of my home country increasingly reveals itself to me as my residency in the United States becomes more and more ensconced. Living in America is a Faustian pact in that it is hard to go back, not because it is so much better than Canada—it is not—but for the mundane reason that the tax system is structured in a way that discourages revocation. It is a cliché to say that one can come to understand a place better from afar. I feel a deepening appreciation for Canada the longer I am here. Political debate is far less Manichean than here in the United States. There is belief in the state as a corrective force against excesses of human behaviour or the marketplace that could threaten the general welfare of the society. Despite the attributes of Canadian society, I do not regret moving to the United States. It would have been all too easy to remain in Vancouver. But relocating to Philadelphia has allowed me to follow a course of greater self-experimentation.

My thinking about art and life comes largely out of growing up in a quiet but skittish Vancouver, which has since transmogrified into something I barely recognize as my own. An immense influx of capital has transformed the city into a spectacle that engenders in its visitors feelings akin to the discovery of the secret of poetry, unaware that it is misrecognition of depth for surfaces. Vancouver has become adorned in what Walter Benjamin called dream kitsch, “the last mask of the banal, the one with which we adorn ourselves, in dream and conversation, so as to take in the energies of an outlived world of things.” It is not just things that become outlived but the people for whom the city is no longer a possibility.

In 2014 I was invited to take part in the Whitney Biennial. During the opening, I ran into another Canadian artist whose work was also included in the exhibition. Over the course of our brief conversation, he lamented that try as he did to look at Canada, where he had lived and worked, Canada never looked back. Our conversation sparked a rather stinging memory of a studio visit that I had with a curator from a major Canadian museum when I was only at the start of my path as an artist. After looking over my work, the curator admonished me for making images that “did not look very Canadian.” It was my portrait-logo works that she seemed most bothered by. These diptychs were comprised of a commercial-studio photographed portrait on one side and an abstract corporate symbol constructed from coloured Plexiglas on the other. The curator described the works as “cold.” It was not the “coldness” (whatever that meant) that was most objectionable to the curator but rather the lack of concern for a hopeful agency that could provide the viewer with an outlet from the alienating spirit that she felt the work engendered. This surprised me as I had always thought my work to be an expression of my East Vancouver roots.

In Canada there was and continues to be a certain ideal of what can constitute Canadian culture. Entities such as the Canadian Broadcasting Corporation continue to advance the narrative of Canada as a culturally fragile place, with stories of success beyond the borders of Canada promoted as somehow rare. The narrative of a nation comprised of isolated communities in constant threat from the forces of nature endures, in spite of how much it is awkwardly negotiated with the reality of Canada’s increasingly cosmopolitan urban centres. The reality of vibrant, multi-ethnic urban clusters is folded into the former meta-narrative of the bush. But both narratives, like all narratives, are built on misrepresentations. While it is true that Canada possesses striking natural landscapes, the country is also home to Arctic oil and mining exploration, massive tar sands development, neighbourhoods of the disenfranchised and ravaged First Nations communities that continue to be maltreated by a highly paternalistic state.

In the United States, the narrative of an untouched nature has all but disappeared (no one really believes it anymore—except for perhaps the very wealthy, who can buy the acreage to fulfill such fantasies), the notion of citizen has been replaced by the term taxpayer and politics no longer even pretend to be about anything but disagreement between elites. Contemporary art has followed suit. It is not just that hedge-fund managers or real-estate moguls comprise a significant number of contemporary-art collectors, which they do, but that their world views extend into the question of what art is.

Yet I still believe in art, if only in the narrow sense of what art has done for me in my own life. It is through art that I am constantly challenged to understand the world and my place within it, even if that place is one that I am not entirely at home in.