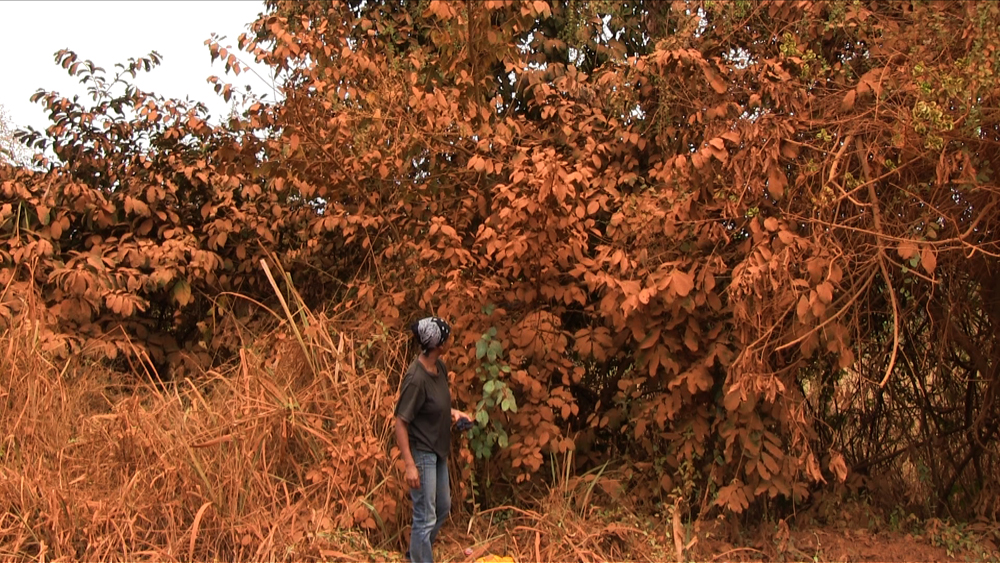 Ontario-born, Paris-based artist Kapwani Kiwanga has been gone a long time. Her work has been shown internationally in prestigious venues like the Centre Georges Pompidou and the Armory Show (where her work is due to reappear next week), and she was just named winner of the first Frieze Artist Award. Her current exhibition “Clearing” at Glenhyrst Art Gallery of Brant is somewhat of a homecoming: she returns to where she grew up, in Southern Ontario, to organize a show that explores personal relationships to land.

In her research-based practice, Kiwanga frequently uses archival documents, and her work includes performance, video, sound, photo, sculpture and installation. Her minimal exhibitions are often the material traces of careful investigations into a specific event, history or place.

Kiwanga’s performance Afrogalactica: A brief history of the future (2011–ongoing) is a live reading with video projection in which the artist figures as a future anthropologist presenting findings from an investigation into the origins of Afrofuturism hundreds of years prior. The different installations of her Flowers for Africa (2013–ongoing), seen last year at Vancouver’s Or Gallery, re-create flower arrangements from significant historical moments as a starting point for unravelling and reimagining the colonial histories of different African nations. Her installations pink-blue (2017), showing now at Calgary’s Esker Foundation and last year at Toronto’s Power Plant, as well as The sum and its parts (2017), presented at Chicago’s Logan Center, investigate the ways in which the design of architectural environments can control feeling and movement.

Notably, “Clearing” is presented at the Brantford gallery where Kiwanga took art classes as a child. There, Kiwanga brings together Robert R. Whale landscape paintings from the gallery’s collection into a space with the new sound piece Landscape Twice Removed. The exhibition also includes Six Miles Deep, a 2009 documentary filmed by Sarah Roque; new photographs of the surrounding Grand River area; and her own 2012 video Vumbi, filmed in Tanzania. Together the works offer different impressions of local communities and the territories they share.

Yaniya Lee: How did you approach putting together this exhibition, “Clearing,” in the place where you grew up?

Kapwani Kiwanga: I grew up in Brantford, which is on lands that were granted to the Haudenosaunee and border Six Nations, the largest First Nations reserve in Canada. Growing up there, I was always aware that it was land that had been given to First Nations through the Haldimand Tract, but at the time I didn’t fully understand what that meant.

Putting together this exhibition is more about articulating things—such as where the tensions and injustices of this place came from—that were hard to put into a historical context as a younger person. As a child I could feel them but I couldn’t quite understand the real intricacies and the structure that had set those tensions about.

As I went on in life I learned more, and now I can compare certain colonial situations in Canada to other ones across the world. So I think, coming back, I was able to look at that situation in a different way. As an adult, I can articulate things that I had sensed or felt—just from maturity, from experience, and also having a political and conceptual framework to understand things differently. I think that’s kind of what the exhibition looks at: coming back and looking at things in a different way. I do not pretend to have understood; I am in the process of trying to comprehend in a more complex way.

YL: Is this exhibition meant to be critical?

KK: It felt necessary to question and look at where I was showing, where I grew up. It felt like that was the only thing I could really talk about, or at least question. I was invited to do an exhibition and I wanted to acknowledge the history of there. That’s what I mean about clarity, and knowing that the area where I grew up is in a region where land was never really ceded by the First Nations (as in “The Grand River land dispute”), although the government claimed it and people have built there.

YL: So in many ways this return allows you to sort through what you had intuited as a child.

KK: Yes, and I guess it feels almost like a responsibility to speak from that experience, having left that place and not having words or the clarity to formulate it—coming back, I felt like I had to address that feeling that stayed with me and has affected how I feel when I go elsewhere. I grew up in a colonial country and that is very particular. It’s similar to other Commonwealth countries, but it also has its particularities.

YL: In what ways is the “Clearing” exhibition sited in Brantford? How did you bring in these considerations of land and power?

KK: In this exhibition, there is a documentary by the filmmaker Sarah Roque called Six Miles Deep (2009). It looks at a contentious moment when there was supposed to be development in Caledonia on the land and then the clan mothers of Six Nations spearheaded a blockade to oppose it. I wanted to include that film because it really touches on this question of land and who has rights to it and questions of stewardship. There’s some really important words spoken when the filmmaker interviews different people about their point of view on the relationship between settler communities and First Nations.

My video Vumbi (2012) also makes this local, specific question a bit larger. It questions how we look at land, particularly when our gaze is towards whatever gains might be had, questions of ownership and power struggles over land itself. I had filmed the video in rural Tanzania: it shows me cleaning off dust from a wall of vegetation so that in the end there’s this sort of green line that appears from what’s otherwise a red wall of vegetation that has been covered by red dust.

The major question that I am looking at in the exhibition is a question of land: what land means to people, how it’s seen differently by different people, contested questions of ownership and claiming of land. I’m also interested in the broader question of landscape, how that works in a more general apprehension of the world, but particularly how it functions in art.

YL: Landscape art is so tied to cultural identity; it embodies a sense of place that can be very nationalistic. You seem to be playing with those meanings.

KK: I think it’s really just to question them. The Glenhyrst itself has one of the biggest collections of Robert R. Whale paintings—he painted in that area and up to the Niagara Escarpment and Hamilton. And so I pulled out some of his paintings of landscape pastorals. I chose his paintings in which there were no human figures, and I hung them in the space.

In that same space, there is an audio piece, a recording of poems by different English-language poets who wrote about the Canadian landscape, particularly in the Ontario area. I tried to determine which languages would have been spoken by Indigenous people in the area at the time of the poems’ writing, and then I worked with Eli Baxter and Ima Johnson to translate them into Anishinaabe and Kanien’kéha languages. The poems were then read out loud and recorded by the person who translated them.

So there are different voices and different languages in the space, which creates another sound, another scape—not a landscape, but an audioscape that is in conversation with these landscape paintings. It was important to me to hear languages that I had not often heard spoken, even though I was growing up and living in lands where these languages would have traditionally been spoken.

It is an investigation into how our eyes are trained and how art itself can make us complicit to this colonial project, in the way art can appropriate land. Language is tied to land, and it’s also tied to culture and the way culture changes in time.

For me, the impossibility of translation was a fundamental consideration, because of course language shapes how one sees the world and how cosmologies are created, how one travels through the world. How one sees questions of geography is also tied to language. So there’s translation which happens, but there are also things which cannot be translated and that’s one of the places where tension comes through: this encounter of different cultural world views around land and space.

“Kapwani Kiwanga: Clearing” continues at the Glenhyrst Art Gallery of Brant until March 11. Other works are on view at the Esker Foundation in Calgary until May 6, and then Kiwanga’s work will be included in the group exhibition “The Blue Hour” at Contemporary Art Gallery in Vancouver starting April 6.

A clarification was made to this article on February 22 to note the end date of the separate Kapwani Kiwanga Esker Foundation exhibition in Calgary, and change start the date of the Flowers for Africa (2013–ongoing) series.

Following her Sobey win, a conversation with Kapwani Kiwanga on audiences, strategies of critique and when critics get it wrong 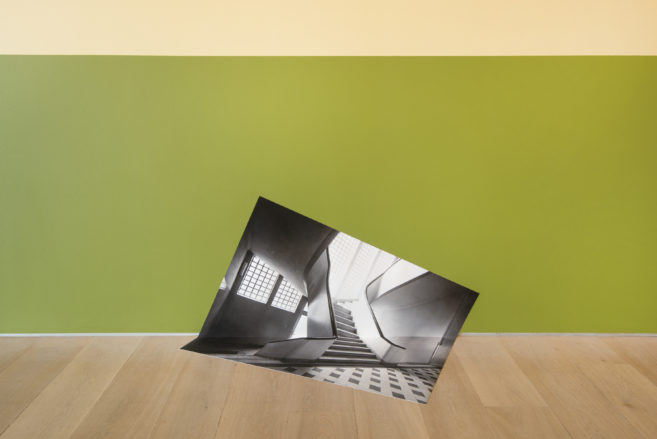 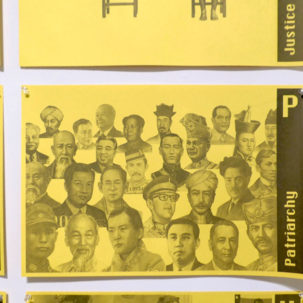