An Accessibility Manifesto for the Arts

Let’s try thinking of accessibility as a creative, long-term process. It’s not just about the built environment, but about ideas of agency and power 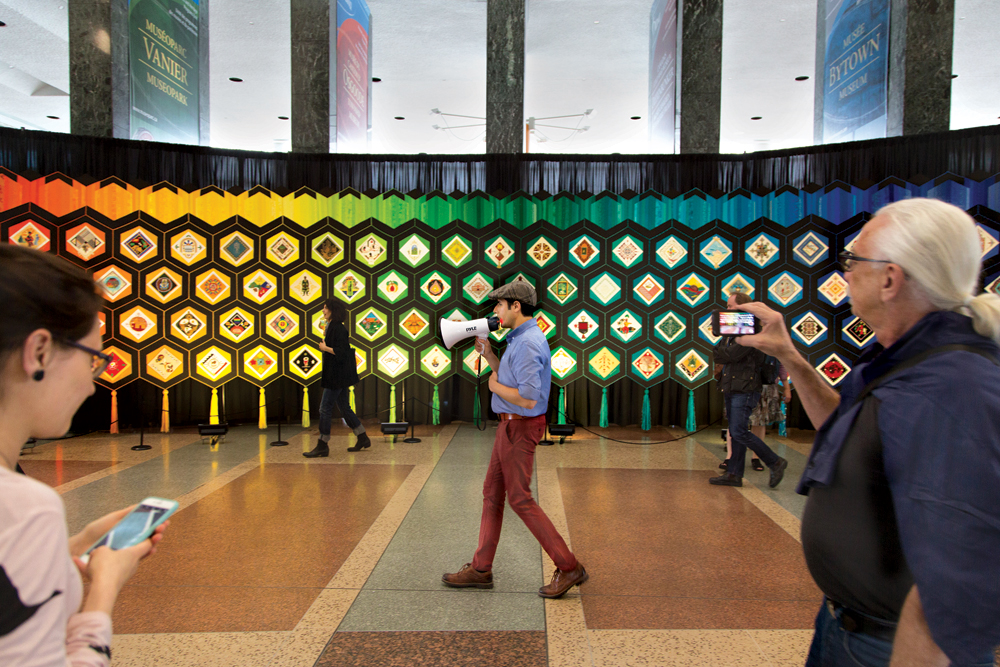 When a hereditary condition began obstructing the vision of Vancouver artist Carmen Papalia, he was underwhelmed by the forms of support he was offered. The non-visual learner (a term Papalia prefers to more institutional, diagnostic language like “legally blind”) began developing an anti-policy approach to accessibility that both informs his artistic work and has influenced institutions including the Harvard Art Museums and Tate Liverpool.

Guided by five main tenets, Papalia’s Open Access approach moves beyond conventional concerns related to access—that buildings can be entered via wheelchair, for example—and instead proposes a rethinking of the terms on which all of us care for and coexist with one another. It’s not a checklist that can be swiftly ticked off, or a set of demands that can be enforced from the top down. Instead, Open Access needs to be embodied, integrated at all institutional levels and constantly negotiated.

Open Access relies on those present, what their needs are and how they can find support with each other and in their communities. It is a perpetual negotiation of trust between those who practice support as a mutual exchange.

Open Access is radically different than a set of policies that is enforced in order to facilitate a common experience for a group with definitive needs. It acknowledges that everyone carries a body of local knowledge and is an expert in their own right.

Open Access is the root system of embodied learning. It cultivates trust among those involved and enables each member to self-identify and occupy a point of orientation that is based in complex embodiment.

Open Access disrupts the disabling conditions that limit one’s agency and potential to thrive. It reimagines normalcy as a continuum of embodiments, identities, realities and learning styles, and operates under the tenet that interdependence is central to a radical restructuring of power.

Open Access is a temporary, collectively held space where participants can find comfort in disclosing their needs and preferences with one another. It is a responsive support network that adapts as needs and available resources change.

Open Access is my methodology for working as an artist and for advocating for myself, but it’s also a conceptual framework that departs from the ways that we typically understand accessibility. Accessibility often refers to the disability community and these considerations are engaged through policies and enforcement. This creates dynamics between people—like recipients of support and providers—that don’t lead to long-term mutual relationships, which I think are a key part of support that works, and support that can change and evolve over time.

Several years ago, I started thinking about the kinds of practices that would lead to a more open practice of accessibility. I even started to think of accessibility as a practice that could be a creative, long-term process. I noticed that a lot of the ways of advocating for myself as an artist in institutions spoke to a different approach to accessibility, one that didn’t focus on the considerations of the built environment, but instead confronts ideas of agency and power.

Open Access describes my own preferences with regards to the types of support-based relationships that I want to be in. It is at play in my own work. In my 2013 performance Mobility Device, I replaced my white mobility cane, which I consider an institutional symbol, with a high-school marching band. They made an arrangement around me to indicate the obstacles that might be in my way. And so we made this agreement to be this organism, this support network for my mobility.

In developing these five tenets, I really started to think about Open Access in relation to a possible learning community. I wondered what conditions could lead to a really open learning community. A lot of questions came out of my work with the Purple Thistle Centre in Vancouver. The physical centre closed in 2015, but for 15 years youth participants collectively ran the organization and decided on programming. In 2014, I led two eight-week workshops there with the participants to think through non-visual learning and Open Access.

That grew into work at Gallery Gachet, where I posed similar questions to the community there. In 2015, I led a project wherein a group of friends from the community at Gachet and I conducted a collective and unsolicited accessibility audit of the Vancouver Art Gallery. Instead of looking at things like the physical aspects of the space—whether people could get into the gallery with a mobility device or what have you—we focused on using our subjective access considerations to assess the social, cultural and political dimensions of the space.

Open Access is also my proposal for others that I’m connecting with through my work. I’ve travelled across Canada, the US, the UK and Europe promoting Open Access and these five tenets to produce a more humanizing approach to accessibility. It’s an approach that isn’t only relevant to a group of people with atypical bodies or minds or behaviour, but to anybody who is living in relation to other people.

I’ve been doing consulting at museums, universities and city departments specifically tuned to Open Access. I do not use current or typical frameworks, such as the Americans with Disabilities Act or recommendations available through the Smithsonian Guidelines for Accessible Exhibition Design, but instead use the Open Access tenets to offer perspective on the state of access in certain institutions. These meetings start with a non-visual walking tour so folks get a sense of non-visual space—it’s something that we do even before getting to know each other’s names. After the walking tours we gather and start getting to know each other. I ask about their relationship to accessibility from a wider perspective, relating to ongoing practices of holding, claiming or advocating for agency in various contexts.

For institutions, it’s crucial to enter these collaborations with a sincere interest that’s not based in some exhibition schedule or funding opportunity. Do you have a sincere interest in the work you’re doing, and is it meaningful to you? Why do you want to work with Indigenous community members? Why do you want to work with people who are experiencing homelessness? Asking these fundamental questions is a start to thinking critically about the ways the institution and the individuals within it are actually supporting others.

We have to realize that the people who hold knowledge about support and accessibility are people who are practicing accessibility all of the time, people who are actually navigating around multiple social, cultural and political barriers. That has led me to think about a future project called the Office for the Practice of Accessibility. It’s going to be a platform to support my ongoing research and project-based work on Open Access, but in relation to Vancouver and, in particular, the formal and informal support networks that exist in the Downtown Eastside.

The great thing about the Downtown Eastside—when considering how support is practiced there—is that it is a tangled, decentralized system. There are a lot of grassroots support organizations that reflect the immediate needs of the community, including Indigenous friendship centres, safe-injection sites and organizations that advocate for women involved in Vancouver’s street-based sex trade. These organizations are at the front lines of community-based support, and they know a lot about how to assist people well under challenging circumstances and realities. That’s who I want to learn from next. —As told to Caoimhe Morgan-Feir

This post is adapted from a feature titled “Access Revived” in the Winter 2017 issue of Canadian Art. To get every issue of our magazine delivered to you before it hits newsstands, visit canadianart.ca/subscribe.