What characterizes the next wave of trans literature? Characters who are given the opportunity to be angry, to be selfish and to make mistakes 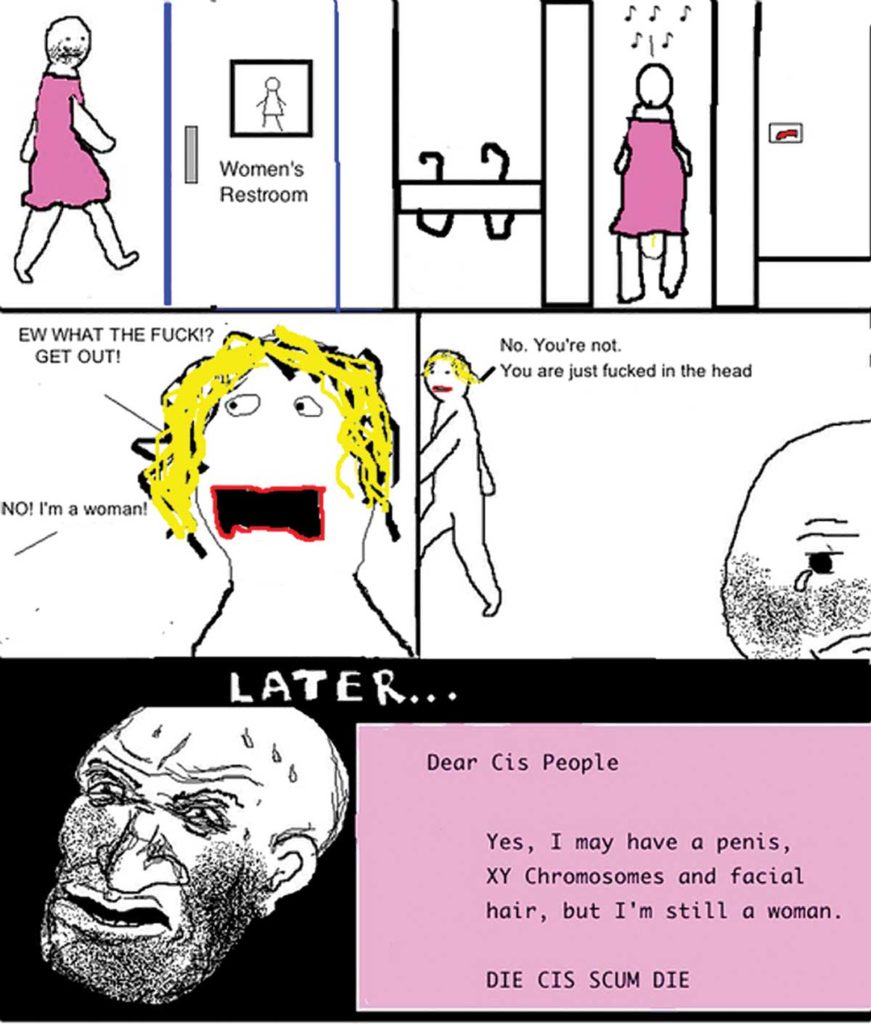 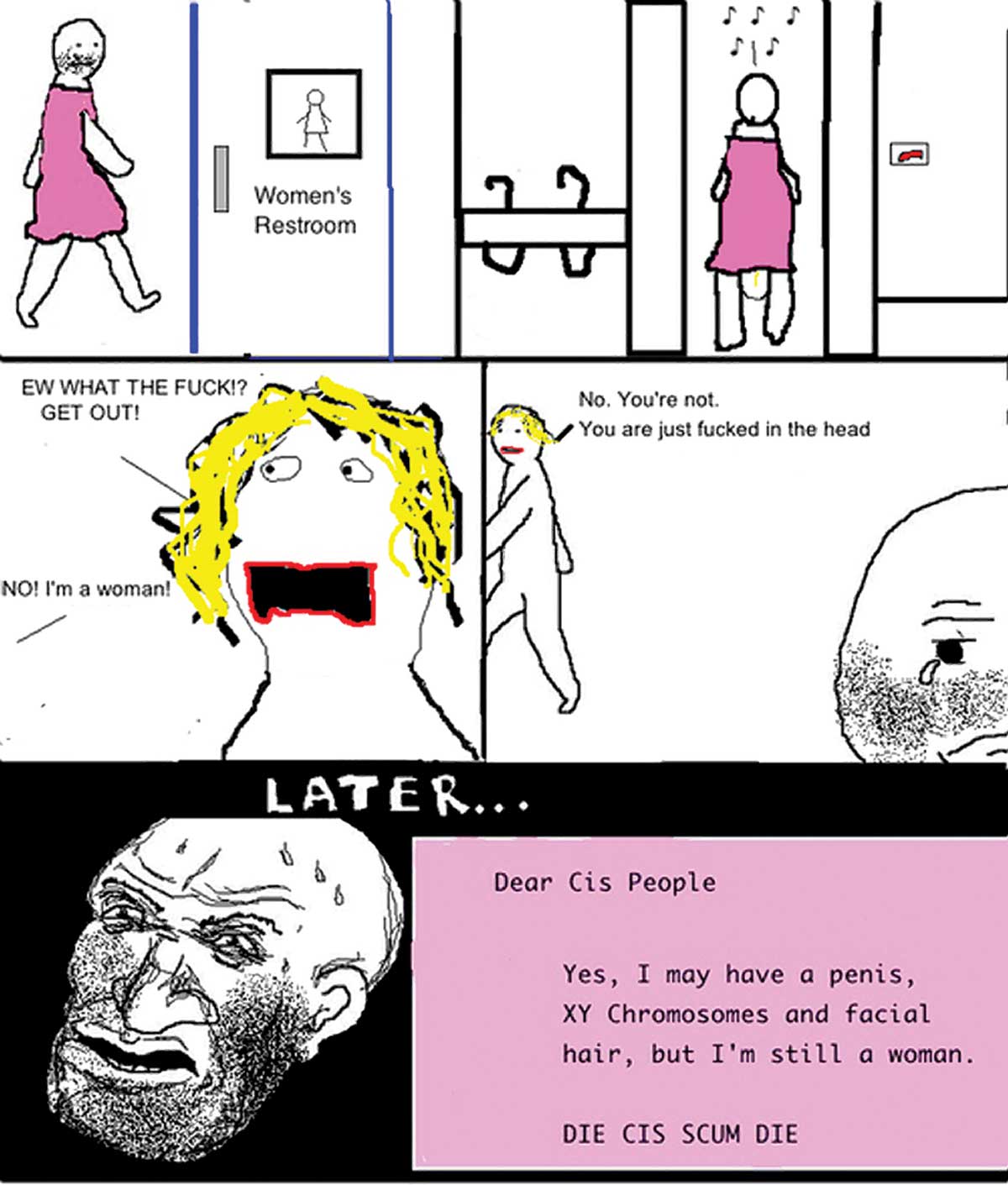 An example of the “Die Cis Scum” Internet meme.

This is my theory of liberation: a marginalized group is really free when they can say that they dislike a member of the dominant group without fear of violent reprisal.

The marginalized community must also be able to hear that the dominant group dislikes them without feeling fear of violence. Freedom is power and security: the power to represent oneself as unlikeable—that is, fully human—and the security not to worry about one’s life or livelihood after.

With this in mind, I find it fascinating to watch an explosion of literature by transgender people over the past five or so years. This movement distinguishes itself from previous trans writing on many aesthetic and thematic fronts: this so-called new wave is fiction and poetry, while the previous is almost entirely autobiography, a tradition that begins with the 1933 publication of Lili Elbe’s Man Into Woman: The First Sex Change and continues through to Janet Mock’s memoir, Redefining Realness, among others. But perhaps it is most distinct in its celebration of trans voices that are frequently unlikeable—and that, furthermore, reject the gaze of cis (that is, non-trans) society.

And by “fascinating,” I really mean “exhilarating and scary.” Freedom isn’t something that just happens. It must be taken by force, in literature and in life. The creation of a fully realized trans character whose purpose is not to evoke pity or horror in a mainstream audience but rather to explore what it means to live as transgender—to hurt, to heal, to struggle and to love—without pandering to cisgender expectations is nothing less than an act of revolution, with all the risk and reward that that entails.

For example, trans author Imogen Binnie’s Nevada, a novel often credited with kicking off the new trans lit movement, delves into the life of Maria Griffiths, a “trans dyke” who mistreats her friends and steals her ex-girlfriend’s car. Maria’s self-centredness is undergirded by a thwarted desire for connection reminiscent of Holden Caulfield from Catcher in the Rye; the difference is that there is a long tradition of literature portraying tortured white men who behave badly. We expect them to, laud them for it. A tortured white man who is also a jerk is representative of the Human Condition.

Trans people, on the other hand, tend to be portrayed as archetypes of the Noble Oppressed Person. Casey Plett, trans critic and writer, describes this archetype as such in an article for The Walrus: “A chosen one, a lone wolf plodding on against adversity. They do no wrong; they remain gentle and stoic in the face of difficulty…. It’s odd to spend a few hundred pages with someone who goes through hell and emerges with all the flaws of a Disney hero.”

I imagine that early trans authors, breaking new ground as they were, felt pressure to adhere to this “perfect victim” narrative in writing their memoirs, to create socially respectable images of trans people in a time when none existed. Through the mediums of fiction and poetry, however, much of the new trans genre attempts to throw off the shackles of respectability politics to unsettling effect, for cis and trans readers alike.

Torrey Peters’s novella The Masker delves into a young trans-woman character whose self-loathing and psychosexual hang-ups lead her down a path of violent intimacy and self-betrayal. Here, Peters holds up a dark mirror to the trans-feminine psyche, an artistic feat in its own right, which feels even because trans women are already so vilified in the public eye.

Meanwhile, Joshua Jennifer Espinoza’s poetry collection There Should be Flowers addresses cisgender readers directly, and with damning simplicity, in the piece titled “I IMAGINE ALL MY CIS FRIENDS ARE LAUGHING AT TRANNY JOKES”: “The time has come for me to be alive / and for you to stop speaking.”

Observing this evolution of trans writing, I think of Henrik Ibsen’s iconic drama A Doll’s House, which scandalized nineteenth-century theatregoers by portraying a middle-class woman abandoning her husband and children to seek a more fulfilling life. Ibsen’s petulant, narcissistic Nora threatened European men by challenging their supremacy. But I think she also must have terrified the married women of her class by daring them to embrace their own selfishness, their own repressed hunger for more.

As a trans-woman reader and writer, so too am I hungry—but I am also afraid, because trans people are not yet free, not when the corpses of trans women are discovered in the streets every month. In giving voice to our full dimensionality, from our grasping desires and petty flaws to our courage and resilience, the renaissance of trans lit attempts to redefine the future of relationships between cis and trans people. And perhaps more importantly, of trans people with ourselves.

It asks us the question, What will we be when we no longer have to fear cis people?

The answer begins with “free.”

This post is adapted from an article in the Spring 2017 issue of Canadian Art.