Art in the Time of Recession

In light of the most recent recession, Daniel Gallay reflects on the spectre of the 2008 crisis and its deleterious effect on the Canadian art market. 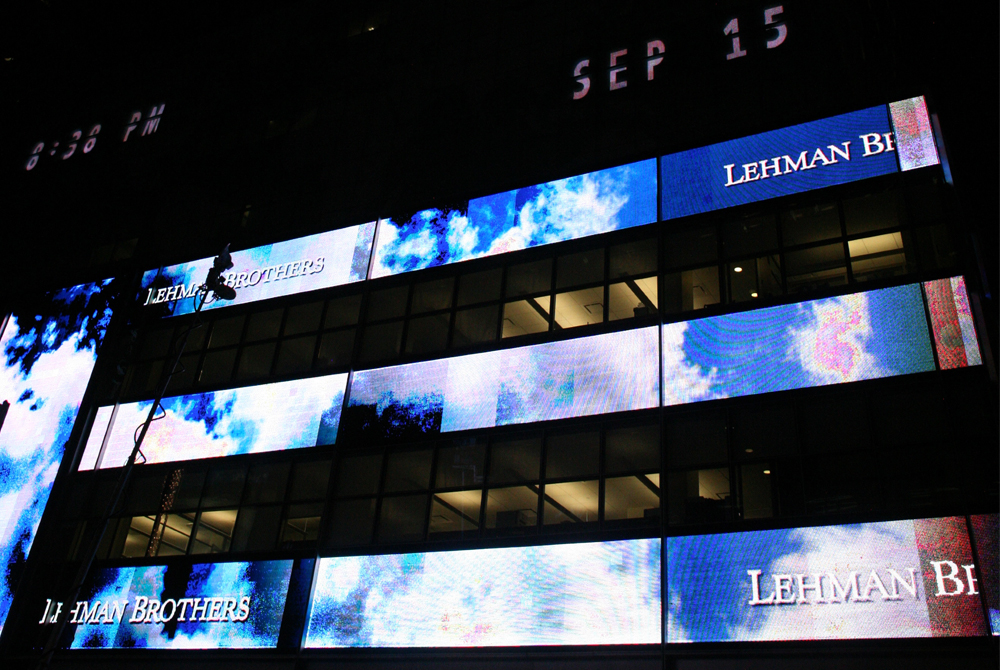 I remember ashen faces—a few of them. A man, hand to mouth, with a lowered, inward-turning gaze stood alone. A chilly, grey sense of dread hung in the air. This was not the scene of a catastrophe, at least not one involving loss of life. This was the Monday morning of the 2008 Toronto International Art Fair, and Lehman Brothers had just gone bankrupt.

In the years leading up to this, the Toronto International Art Fair (now Art Toronto) seemed, like all art fairs at the time, to be doing very well. There was a strong mix of international galleries, including a notable number from China. But with the opening shot of the Great Recession landing right in its lap, things, at Art Toronto and elsewhere, were about to change.

There was a gallerist from Paris whom I met at one of the opening events of the fair, and by the end he was concerned but unfazed. I saw him again a few days into the next year’s fair and he said he was having a very difficult time selling anything. He said that people would ask questions, ask to see CVs, leave, come back, ask more questions and ultimately leave. He was visibly strained: a booth at an art fair is a large expense, not to mention international shipping costs. I didn’t see him the next year, when there were fewer European galleries, and the number from China dwindled.

The Canadian market’s identity is based on its size, and its reaction to strains like recession has everything to do with this.

For years I have worked for the Roberts Gallery, which specializes in Canadian historical art, and also represents contemporary artists from across the country. Because of my time there, which predates the recent/current recession, I have been able to form a viewpoint on both historic and contemporary markets, one corresponding not only to the sale of artworks, but also to the character of those who do and do not purchase them.

The sales of contemporary artists since 2008 have been varied, but certain trends stand out. Some artists’ sales have been strong, and, in a few cases, stronger than before the recession. These artists tend to make their statements clearly and directly. I spoke to my gallery’s director recently about an artist’s work that is not clear and direct, surmising that the problem we’d have selling it would be getting people to pay attention. His response was a pinch-lipped nod of agreement.

This could be a symptom of distraction, but I think it’s more related to confidence. In the years since 2008, I’ve seen an absence of confidence in the middle-/upper-middle-class section of buyers, which was more robust in previous years. There have been flickers of confidence from time to time, but never anything nearing a complete return. I mention middle-/upper-middle class in terms of the contemporary-art market because this is the category of people who are most likely to buy artworks in the $500–$5,000 range, which many of the gallery’s contemporary artists occupy.

While confidence was healthier before 2008, it was by no means ironclad. There is a fundamental delicacy to the confidence that any Canadian (especially Anglo-Canadian, with whom the majority of my experience has been) who has any sort of familiarity with culture tends to have. I think this stems in part from the average Canadian’s lack of a day-to-day relationship with culture, which is seen as something for specialists or the wealthy. In Canada, culture is basically foreign (rather than, say, basically human) so any confidence gained is often easily undermined. Spending $1,000—no small sum of money, and increasingly so—on something someone feels at all unsure about is daunting.

The sale of a $10,000 or $100,000 artwork is a different matter. Indeed it is a different category of buyer, one typically more moneyed and therefore more willing to take action. My dealings with this type of buyer have been mostly in the realm of the historical-art market. In Canada this is a particular thing, with specific characteristics and tendencies, most of which are dictated by size, or lack of it, and so lack of diversity. With other contemporary markets in Canada—airlines, telecommunications, entertainment—there tend to be two, sometimes three, major players among whom the market is divided at the expense of all other competition. Population (and occasional government intervention) easily explains this. Saskatchewan has more landmass than California, but California has a larger population than all of Canada.

It is difficult, then, for Canadian markets to become diverse. Demand may be large enough for products to become viable, but not so large as to allow for true diversity. This is the case for historical art in Canada, and it’s a pressure that has resulted in oversimplification. The common non-Indigenous national narrative—European artists in Canada; Group of Seven; Quebec Impressionists; Post-War artists; Abstract artists; Conceptualists—is easy to apply and has been reinforced by historians and major institutions. It is interesting and sometimes illuminating, but it is by no means the entirety of the narrative. Many artists of the same calibre worked at the same time as the Group of Seven and the Quebec Impressionists; there was a rich period of Modernist drawing during the ’60s and ’70s, decades generally seen as Conceptualist.

There is an under-acknowledged relationship between the narrative created by historians and institutions and the choices made within the market; one confirms the other in a cycle that can become more and more reductive. The historical-art market in Canada tends to be dominated by a handful of groups or movements at the expense of everything else.

During the recession, the historical-art market, like other markets, has seen a silo-ing of resources. The spending power of the middle class has been hollowed out, and with historical art, I have seen sales tend towards the high end. (This is true not just in Canada, but in other countries as well, as seen in recent record-breaking results at auction houses like Christie’s.) In previous years it was the case that in a major historical exhibition at the gallery where I work, all of the lower-to-mid-priced works (in the context of the Canadian market, $2,000–$10,000) would sell immediately, and higher-end works ($25,000 and higher) would then eventually sell. This, lately, has been reversed. Higher-end works will sell before an exhibition has opened and the more moderately priced works will eventually sell later on.

While large sales are exciting for all involved, this circumstance doesn’t necessarily speak to diversity, as there are far more moderately priced works available in the market than expensive ones. What’s more, the type of work that dominates most of the market is so culturally specific to Canada that it makes the market isolated. In terms of ecosystems, these can be sources of difficulty.

The day Lehman Brothers announced its insolvency was the first day of a two-day auction at Sotheby’s of works by Damien Hirst. Not only was this the largest-ever single-artist auction (more than 280 lots), but Hirst was there without representation from any gallery. One hundred per cent of the results, less the commission of the auction house, were due directly to him. Interestingly, the announcement of the global financial crisis appeared to be a boon for Hirst, his works going on to sell for a total of around $200 million USD over the two days. Even though some works sold below estimates (which were already low for the artist) it is difficult not to read this as a symbolic last hurrah, especially when one of the pieces in the auction was entitled Golden Calf.

In the time since, Hirst’s legacy has been re-evaluated, sometimes radically, especially in Britain, but his market, although altered, remains strong. Larger ecosystems can often survive deleterious changes without major challenges, if true diversity exists. The Gulf of Mexico can, for instance, absorb and disperse catastrophic traumas like the BP oil spill with, it seems, few long-lasting complications. Small lakes, such as the one I grew up near, can develop significant problems like algae proliferation or dead zones due to a relatively small amount of nitrogen-fixing fertilizer runoff. In the historical Canadian art market, I’ve witnessed certain important artists’ work nearly die off completely without (as of yet) remotely recovering. This is minor, perhaps, next to the many sputtering or stalled careers in contemporary art and culture.

Some bemoan the conservative nature of much of contemporary and historical Canadian art, but I often ask myself how it could be any other way. You can’t expect every flower to bloom in an environment that hardly allows any to do so.

About two weeks ago, I had a conversation with an older lady on a train. Her questions were slightly oblique and non-sequitur. After a pause she asked me, “Do you think we’re headed for a crash?” It took me a while to realize she was referring to financial markets. I thought for a moment and said, “No, but I think a lot of money has gone from the middle to the top and has stayed there, and the squeeze of that is hard and could go on for a long time.”

A squeeze can be worse than a crash. The prolonged but survivable strain of a squeeze, where things are made leaner and leaner still, and where each austerity can gradually be acclimated to, can have a large impact on the present, but can have a much more drastic impact on the future. If these circumstances are compared to an ecosystem again, the gradual starving and stressing of an already susceptible system is going to dictate not only its present state, but also the growth that can emerge from those states in the future. If confidence and diversity are absent, whether by choice or by circumstance, growth cannot happen. This, to me, is a real scene of catastrophe.